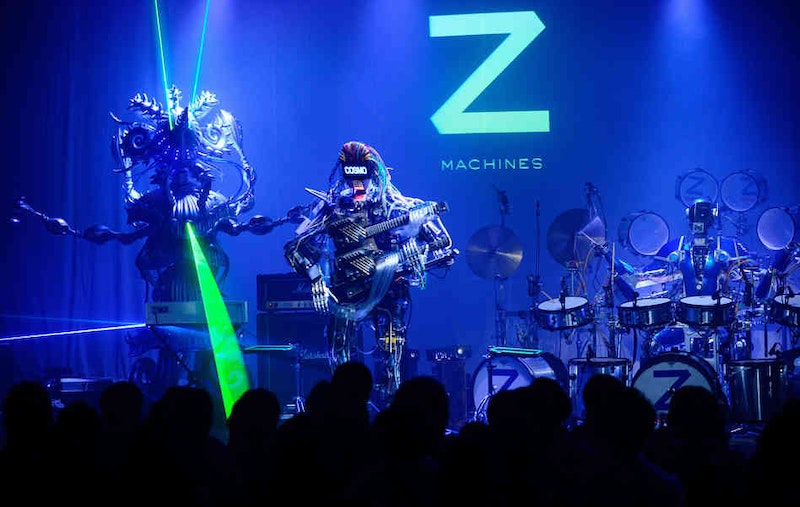 Squarepusher's new album, out this week, is called Music for Robots, and that's what it is. The album is performed entirely by a trio of Japanese robots. One of them has 78 fingers and plays two guitars simultaneously. Another plays drums with 22 arms; the third is a keyboard player that shoots lasers. It's music for the future played by machines that are replacing us today.

The weirdest thing about the album, though, is that it's not actually all that weird. The performances are certainly intricate; even the slow intro of "Remote Amber" cascades with notes, while "Dissolver" is a skittish wash of off-kilter sounds and beats, a fast-paced fruity blur of technical mastery. But that doesn't exactly make it sound futuristic or otherworldly. It just makes it sound like Yes—sped up some, but still recognizable.

This isn't an objection on my part—I like Yes, and I like Squarepusher, aka Tom Jenkinson, as well. This album doesn't quite stand up to the cracked prog funk of his 1998 masterpiece Music Is Rotted One Note, but it's a huge improvement over 2012's by-the-numbers-and/or-binary-codes Ufabulum. Collaborating with the inhumanly equipped electronic men seems to have forced Jenkinson to try to stretch himself like he used to—and, again, that stretching involves turning back towards past vision of the future. The sound of these impossible progressions being performed live, outside the laptop, is at once refreshing and inescapably cheesy. "World Three," with its portentous keyboard sallies overlaid with portentously precise, fleet-fingered guitar declamations, feels like a more sedate, technically competent version of L. Ron Hubbard's bombastic sci-fi compositions. The future will be triumphal and clean and will be ushered in by a processional.

I've written before about the way in which the content of future visions is often, at this point in history, simply nostalgia for other future visions. Arcade games and Star Wars and robots running the world are by now part of our collective childhood; the future isn't something that's coming, but a ghost of our past. You can hear that in Music for Robots, which is suffused throughout its five songs with a plangent longing. Even without listening to the album, you can hear it in titles like "Remote Amber," suggesting a frozen distant moment, or the bittersweet "Sad Robot Goes Funny," that speak for themselves. "You Endless," the final track, is a straightforward lyrical elegy, slow tempo-ed, melancholy but uplifting; it could have easily played at the end of Her if they hadn't had some other twee bit of melancholy uplift playing instead. The tune certainly doesn't sound like it needed 78 fingers, 22 arms, or lasers to play it.  A few mildly maudlin regular humans could have worked just as well.

Perhaps that's the point. In an interview with NPR, Jenkinson said the question for him when he took on the project was "Can this music be emotionally compelling?" He goes on to say:

Of course, everyone's gonna have different answers. But even if one person says yes, that tells me something. The world of music performance is seen as sovereign human territory, and if a robot can encroach on it and generate a performance that people find compelling, I think that is a historical event.

This is all marketing gobbledygook to some extent. This album is in no way historic, and, in any case, humans and non-humans have been collaborating in music making since the first Neanderthal rhythmically bashed rock against rock. If you can play an electric guitar and make people respond, it's not clear why playing a robot should different in kind, or shake anyone's paradigm. But even with those caveats, Jenkinson's appeal to emotional truth, to the human element in the non-human performance, seems significant. These nostalgic images of the future are, maybe, impelled not just by the imagined future that activates past emotions, but by an emotional desire to believe that the future will resonate with the past. You would expect our future robot overlords to play prog; that's part of why having them play prog is satisfying or pleasing. Music for Robots isn't for robots at all. It's for people who want robots to tell them they're humans, and will remain so when the future comes.