A great show at Baltimore’s Ottobar, but the artist’s reputation haunts him. 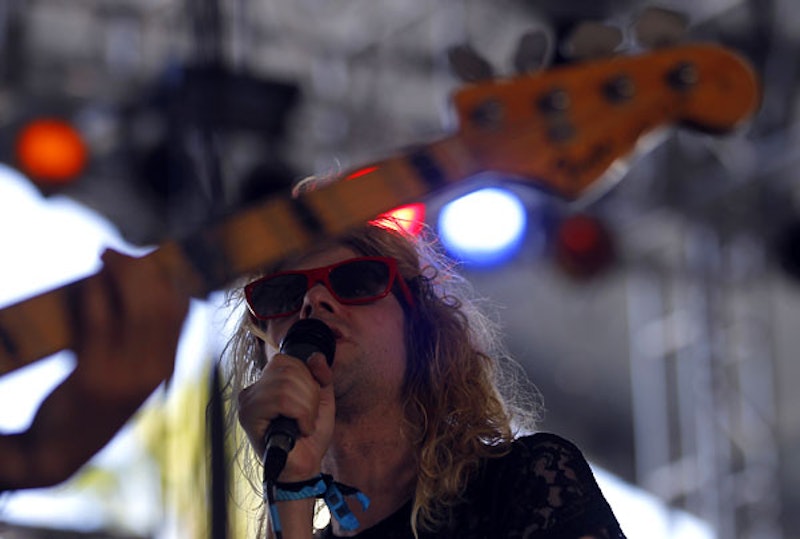 Throughout his career, Ariel Pink has sabotaged his own success and crippled the momentum gained through sound decisions. The widespread acclaim of 2010’s hi-fi debut Before Today and the excitement about Pink’s new virtuoso band was diffused by countless botched performances, most notably at Coachella in 2011. Pink later explained he had dropped acid before the show and had a nervous breakdown, but that was the norm. He’d obnoxiously sound check for an hour before starting, then get too drunk or fucked up on this or that. The whole bit came off as torturously contrived and, as far as reacting bristly to success goes, it’s been done better.

Since 2012’s concise and straight power pop follow-up Mature Themes, the artist has come to terms with what it means to be a professional performer and touring artist. During the past year, and on June 11 at Baltimore’s Ottobar, there was none of the obnoxious and affected disengaged attitude of the past decade. Despite looking annoyed and depressed, dressed in a gray hoodie with no t-shirt and big baggy black and white striped prison pants, Pink delivered an airtight set spanning his whole career. The Doldrums, House Arrest, Worn Copy, and Loverboy were all represented, along with about eight songs from his last two records. His band Haunted Graffiti are true musos who didn’t fuck up Pink’s deceptively complicated and complex arrangements (new touring guitarist Jorge Elbrecht was a welcome addition in particular).

The sad truth is Ariel Pink will always be unhappy, and unrelentingly dark. His struggles with substance dependence have been confirmed dozens of times and it was routine for Pink to botch his own shows in an aggressively introverted chemical stupor. The most alarming thing is the artist using methamphetamine, which has been rumored for years, and references pop up throughout his body of work (it would also explain the sheer volume of songs he’s recorded—several hundred). The Ottobar show was severely under-promoted, and not even close to sold out. Several friends of mine said they heard about it at the last minute, and didn’t go assuming it would be sold out. The Coachella thing was a Milli Vanilli moment, and it continues to circulate to this day. So someone who’s not a fan of Ariel Pink but is aware of “Round & Round” will invariably say, “Oh, I heard he sucks live.” Which used to be true, and it was entirely Pink’s doing. But why? What makes “difficult” auteur songwriters and musicians, who’ve dreamed their whole lives of being internationally beloved super rock stars, react with bitterness and bile when their dreams are actually realized? It’s guilt, it’s a feeling of “what now?” conflict between what your imagined success would be and what it ended up being, and what does to your own self image. Rock history has shown repeatedly what a toll this can take on certain artists, and Pink seems awfully close to seeking oblivion.