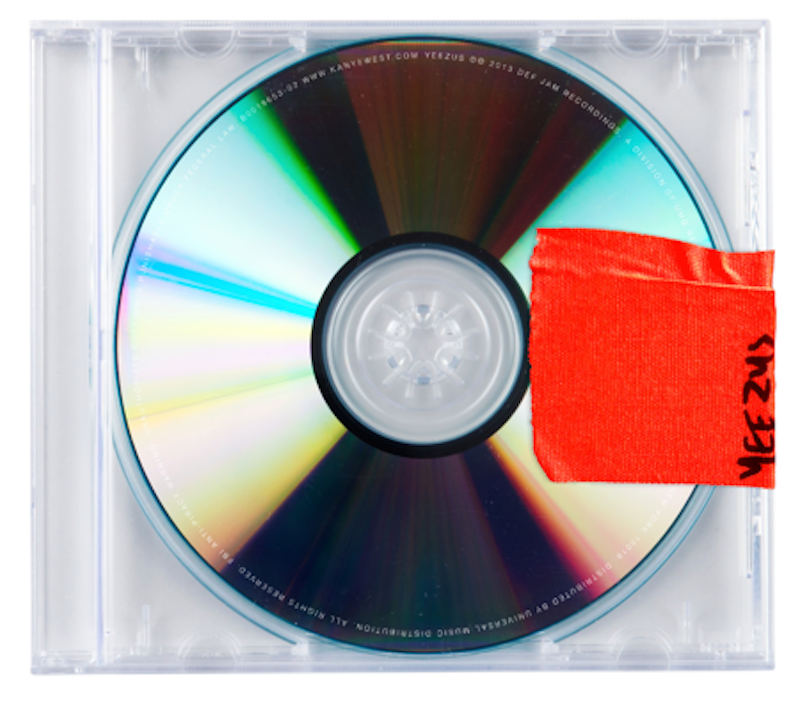 I don't even know what I was expecting from the cover art for Yeezus; it was pretty much as unfathomable as what the nature of the music itself would be, the phrase "U N K N O W N" hovering mere inches above the notion. Uninterrupted velvet black, no text—or maybe matte black, no text—would have fit, I think. It never occurred to me that the cover could somehow literalize the title. That the actual cover doesn't do this is a relief, even if the actual cover is the mother of all cop-outs. By now you've probably seen the Yeezus art, on a computer, unless you're Kim Kardashian and were provided a retail copy to fondle and Instagram while coordinating the baby's nursery. There was a leaked cover. Then there was a corrected cover, also leaked, which Def Jam confirmed, and the world was left to ponder the confirmed, actual cover: in the expected horizontal humor, then with the head cocked quizzically to one side, wild-life style, then with fist under chin and a flute of California blush wine dangling from your other hand, as though you found yourself loitering in the bowels of a posh art gallery, rocking a collar-less short-sleeve blazer, reeking of Drakkar Noir.

The Yeezus cover art, of course, is nothing—an evocative nothing, to be sure, but nothing nonetheless. No, seriously: look at it up there, leveling a baleful gaze back through you. This sucker is about as barebones as compact disc packaging can get, even as we're drifting into an era where "compact disc" is more a concept than anything else—a step above that cover for Lou Reed's Metal Machine Music that looks like a master tape and the cover for Tortoise's TNT, which suggests a CDr you'd make for a pal if you had some basic artistic ability. Yeezus is a couple steps up the evolutionary ladder of "fuck what you think" packaging anti-schemes, presenting a labeled disc—or at least the appearance of one, nobody knows what the CD actually looks like at this point—in a clear case sealed shut with red tape with "YEEZUS" doodled on it. I like that, the conflation of this whole enterprise as something tossed off carelessly when we all know it totally wasn't, it was far flung and calculated and catered and expensive, but then also the blaring red of the tape suggesting that it's symbolic of the bygone tradition of a red-wax seal, as though we as consumers are about to delve into something holy or papal.

The red also registers as blood, or rage, which dovetails in a way with the package's sheer nakedness, as if West's intention is to bare his soul, to flambé some sacred cows, maybe plant a burning cross on the White House lawn in a manner of speaking. We've heard a few of the songs slated to turn up on this album and they're incendiary, to say the least. Two more interpretations to chew on: the laid-bare presentation could be saying, in the tired parlance of reality performance competitions, that Weezy has "left it all on the disc," and is sort of bookmarking his cultural place with an especially curt outing as he prepares to disappear into the wilderness of fatherhood for a couple years; or, well, the joke may be on us, a "the clothes have no emperor" kind of deal. We'll all find out next week, but who knows? More curious, or maybe more sobering: does it even matter?