A Defense of Sara Bareilles

Grammy voters think she made one of the year's best albums. Could they be right? 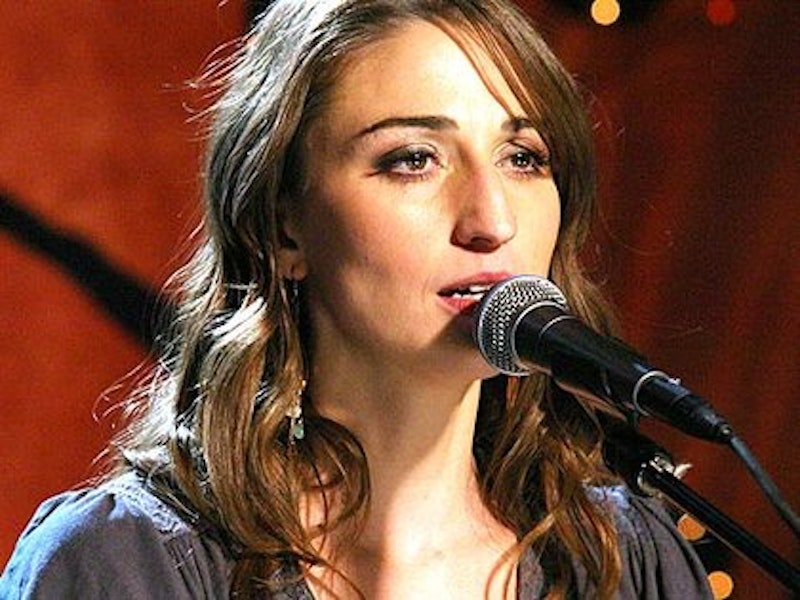 The Grammys are looked at less as a bellwether for an industry or a measure of excellence, and more as an occasion to ridicule its governing organization for what it got wrong. The nominations are announced every year, and music fans everywhere delight in mocking the incompetence of the National Academy of Recording Arts and Sciences for ignoring popular and critical favorites.

Often, the big surprises occur in the genre categories—last year, the heretofore unknown Al Walser made headlines for gaming the NARAS system to land in the Best Dance Recording category alongside EDM superstars. But the biggest head-scratcher last month was for the most prestigious category, Album of the Year: Sara Bareilles, a singer-songwriter who you may only be familiar with if your media diet includes lots of VH1 or adult contemporary FM radio. She stuck out like a sore thumb alongside a quartet of nominees who loomed large over 2013: Taylor Swift, Daft Punk, Kendrick Lamar and Macklemore & Ryan Lewis.

Of course, the Grammys are a popularity contest; occasional obscurities aside, you have to be pretty big just to be considered for the major categories. So the most charitable reaction to this news may be “Wait, is Sara Bareilles way more popular than I realized?” No, not really. Her nominated album, The Blessed Unrest, was released in July to modest sales, debuting at #2 behind Magna Carta Holy Grail. In six months, it’s moved about 300,000 copies; the next lowest seller in the category, Daft Punk, is at over 800,000, while the rest are well past platinum (four million for Taylor Swift). Each of those albums also has hit singles that’ve peaked higher on the Hot 100 than the #26 peak for the only single Bareilles has released so far off of her album, Brave, which is best known for resembling Katy Perry’s far more popular Roar. The Blessed Unrest ended 2013 on Billboard’s year-end album chart rankings at #134, between an Eric Church live album and Arcade Fire’s Reflektor. Bareilles’ only Top 10 pop hit, “Love Song,” and her only platinum album, Little Voice, are both more than half a decade in the rearview.

Bareilles does fit the Grammys profile, kind of. Photogenic young women who play an instrument and/or write their own songs are catnip to NARAS, even to a greater degree than comeback albums from Boomer icons like Steely Dan. But the women who get Album of the Year love do so with blockbuster debut (or breakthrough) albums, and tend to be younger than Bareilles, who’s 34. In that sense, Robert Plant and Alison Krauss’s 2009 winner Raising Sand was the ultimate Album of the Year, pairing a veteran male artist with a much younger woman (Krauss, the most awarded female artist in Grammy history, won her first statuette at the age of 20).

In the past two decades, Alanis Morrissette, Lauryn Hill, Norah Jones, Taylor Swift and Adele have won Album of the Year, and other VH1-friendly songstresses like Joan Osborne, Paula Cole, Sheryl Crow, India.Arie, Alicia Keys and Amy Winehouse have been nominated. In recent years, female vocalists of a flashier, more contemporary variety like Rihanna, Lady Gaga, Beyonce and Katy Perry have also bagged Album of the Year nominations (this is a fairly new phenomenon—Madonna had to wait until Ray of Light to get a nod in the category). It’s almost an annual tradition now to gift a young woman with so many awards on Grammy night that she can be photographed in a pornographic fashion, struggling to wrap her arms around those big, heavy statuettes. Some girls can barely even handle all that hardware.

Bareilles would’ve fit the Grammys profile better if she’d gotten an Album of the Year nod for her breakthrough album, 2007’s Little Voice. It didn’t, at least partly because it failed to take off until 2008, after the Grammy nominations, when the single “Love Song” jumped into the top 10 and propelled the album to platinum sales (“Love Song” did, however, get a Song Of The Year nom in 2009). But that remained her commercial peak—the two subsequent albums fell short of gold, and all subsequent singles have missed the top 10. “Brave,” which recently peaked at #26, is her biggest hit since “Love Song.”

The lowest-selling Album Of The Year nom usually brings some cachet of artistic credibility, in the form of critical acclaim and/or past accomplishments—think of Herbie Hancock triumphing over younger artists, or indie underdogs Arcade Fire going up against major label stars. Even in that sense, Bareilles comes up short—her critical profile is so non-existent that she got zero votes in the Village Voice’s latest Pazz & Jop critics poll. In fact, I’m one of the only three critics in Pazz & Jop history who’s ever voted for Bareilles, all of whom voted for “Love Song” in the 2008 singles poll.

If the most cynical explanations for the Grammy nominations don’t hold water, perhaps the question is: are Grammy voters simply sincere in their love of Bareilles? Is her album actually good? As the de facto representative of Bareilles’ fanbase in the critical community, I’ll go to bat for her. The Blessed Unrest wasn’t my favorite album of 2013 by a long shot, but it did make the list (down at #45). Bareilles has become a master of the knowing, sweetly self-pitying breakup song, from the down tempo “Manhattan” to the stomping, defiant “Little Black Dress,” perhaps her catchiest track since “Love Song. “Hercules” and “1000 Times” are elevated by lush, offbeat vocal harmonies. And “Eden” and “Cassiopeia” take some steps into a more modern, synth-based sound that’s darker and more dramatic than the blandly chipper “Brave.”

Bareilles isn’t edgy—at most, she can resemble a less acidic Aimee Mann, or a more optimistic Fiona Apple. But there’s an intelligence and craft there, a classic singer-songwriter sensibility that may be taken for granted in the post-Lilith Fair era where adult contemporary radio seems to enjoy an endless supply of sensitive ingénues. But she might have a shot at being sorta cool. Bareilles and another VH1 mainstay, Ingrid Michaelson, collaborated on a 2008 compilation track, the stark and lovely “Winter Song,” that was performed for President Obama at a Christmas event in 2010, reached #2 on the Irish pop charts in 2011, and became an unlikely favorite of hip-hop producers. Kanye West and Hit-Boy sampled it for John Legend’s recent track “The Beginning,” and it’s also been sampled on songs by Vinny Paz, of Jedi Mind Tricks, and Italian rapper Bassi Maestro.

In 2012, Bareilles released Once Upon Another Time, a five-song EP produced by Ben Folds that represented something of a quirky, un-commercial side project, including the gorgeous a cappella title track and the foul-mouthed novelty song “Sweet As Whole.” That the EP debuted in the Top 10 of the Billboard 200 without a significant promotional push was the first indication that Bareilles has a diehard fanbase that checks for her records even when there’s not a radio hit. It also seemed vaguely like a compromise for a label that was not ready to release a new album from Bareilles after 2010’s underperforming Kaleidoscope Heart. While all of her post-“Love Song” singles failed to provide her with another huge hit, those charming semi-hits were what really piqued my interest in her albums: “Bottle It Up,” “King Of Anything,” and ”Gonna Get Over You,” which had an entertaining Jonah Hill-directed video that never managed to boost the great song into the Hot 100.

After this series of singles that grazed or completely missed the Top 40, Bareilles was sent into the studio to collaborate extensively with co-writers for the first time on The Blessed Unrest, ostensibly ones who could help her pen a big hit. Jack Antonoff, one of the members of fun, who co-wrote “We Are Young,” came in to co-write “Brave.” But even her other biggest hit, “Love Song,” was a direct result of frustrating label machinations—Bareilles said it was a “passive aggressive” response to Epic’s rejection of her previous attempts to write a single. And yet, “I’m not gonna write you a love song because you asked for it” proved to be a universal enough sentiment, or at least a catchy enough hook, to launch her career.

So on January 26, I’ll be watching the Grammys and rooting for Bareilles. Not because I think she made a better album than Kendrick Lamar or Daft Punk (I don’t). And not because I can’t stand Macklemore (I can’t). And not even out of pity that so few others will be rooting for her, but because I liked her music more than anyone else I knew already. And once in a while, I feel like the Grammys spoke up for my odd minority opinion, even if by accident.