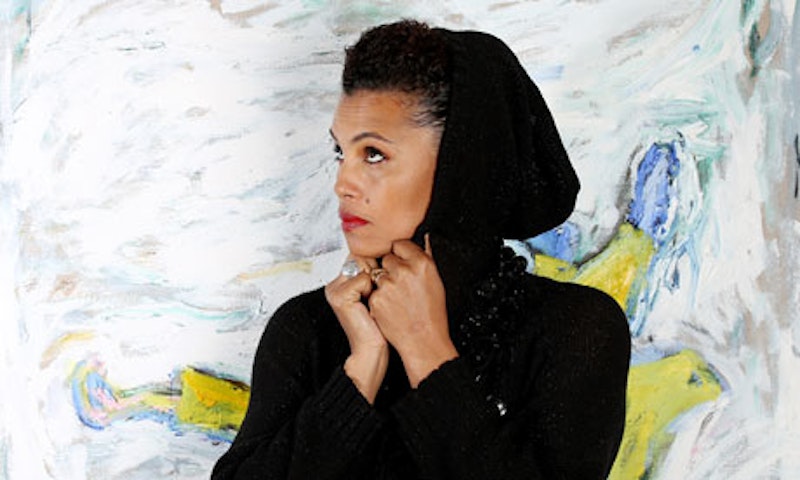 Two dudes. Expendable vinyl on two turntables. One kick drum. A cheap voice filter, an organ. The mutant ability to unreel and retract mythic outlays of feedback. Boredom, creativity. That's what "Errthang Bounce" sounds like to me: the combination of elements that don't add up to much on paper into some straight Iron John tribal spew that then somehow transmutes itself into a journey to the far side of a black hole. I keep wanting—needing—to believe that this song is an understated tribute to "Mr. Bouncety-Bounce," the bizarre daytime talk show from David Foster Wallace's Infinite Jest. But honestly, the less I know about how this song was made or what any of it means, the better. Maybe the whole thing was collaged on a laptop, sourced from anonymous YouTube videos. There's something special to be said for mysteries, secrets, the clandestine. I mean, is this musique-concrete? Noise? Experimental spoken-word? Who cares? Just listen to it.

White Rainbow, "Be The Dancer Be The Dreamer"

And so Adam Forkner returns from an extended Bandcamp exodus—more or less—to bestow upon us... what, exactly? Some sort of airless mash-up of New Age, instrumental hip-hop, and staple-gun techno? There is no space to breathe or even move amidst the steppe-stoop synthesizer surges, juggling of vocal samples, yo-yoing rhythmic dissolves that knock as hard subliminally, as a Tyson sucker punch, and spicy Moroccan cookie-crumbles. The rest of THRU.U is similarly kitchen-sink, but I singled "Be the Dancer Be the Dreamer" out because it's the most effortlessly fun and varied—as though Forkner staged his own mind-fuck homage to the SNL "What Up With That" skits without breaking a sweat. Seriously, anything or anybody else could have showed up in this song and I have faith that it totally would have worked, somehow: a saxophonist, crashing timpani, a Tuvan throat singer, Sting. The more you're exposed to this, the more you discover, or perhaps it somehow telegraphs that delusion. Either way, welcome back, Adam Forkner.

Nothing on Blank Project, Neneh Cherry's don't-call-it-a-comeback album, is likely to set servers or cash registers a-ringing. The beautiful part is that Cherry has lost interest in crowd-pleasing, so anyone who's been holding their breath in expectation or who happened to luck into a chance promo download (I'm in the latter camp) is in for a snout full of what can only be described, in relative terms to, say, "Buffalo Stance," as abrasive industrial pop. With Four Tet's Kieran Hebden onboard to produce, it's all storm, storm, storm, and the oxymoronically titled "Weightless" might well be that storm's eye. Layers of impossibly light snare taps crowd Cherry's distinctively tortured voice like sand-fly clouds. A distorted guitar line blowtorches grooves into a surrounding tension; cowbells clang like warning klaxons; the barest hint of a synthesizer swirls in the margins. With that, and the end-of-rope lyrical bait Cherry doles out like hunks of red meat, the essentially minimalism of the whole achieves a frazzled, kinetic leadenness. Weightlessness for her narrator is pure aspiration or escapism, not day-to-day reality, but I must confess that this conflation of "Meet Ze Monsta"-era P.J. Harvey/Broken-era Nine Inch Nails is making me a very, very happy lapsing rock critic. Cheers.