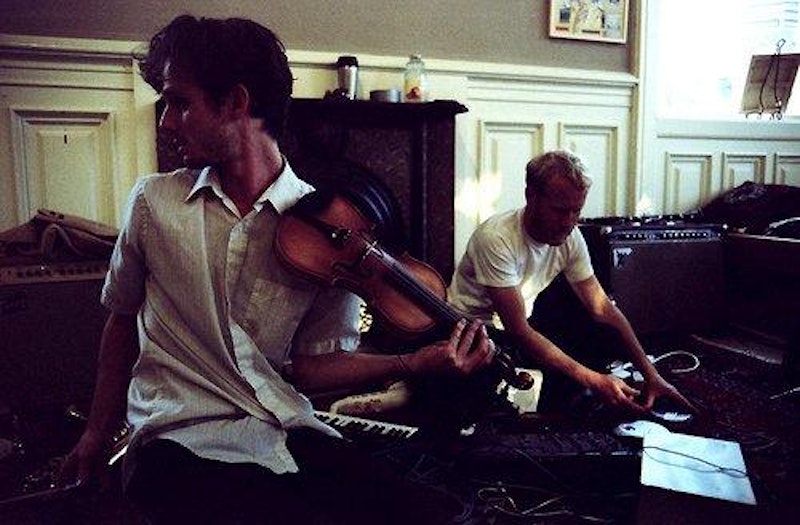 There are a lot of wrong ways to hear Land Lines for the first time; wandering a central Texas subdivision during on a late December evening gawking at light displays isn't one of them. The seasonal dynamics Northerners expect to define scenes like this one aren’t in evidence: the wind has little to no bite; no frost or snow or icicles exist, anywhere; the suburban wilderness is almost impossibly still. A hollow, haunted dissonance persists: every third home framed by glowing garlands of miniature bulbs, animatronic deer grazing at withered lawns, cartoon representations of Frosty the Snowman and Santa Claus grinning ghoulishly from doorways—but beyond that, no light seeping from between blinds, no indication that anyone was home on any of the streets and avenues I wandered with my dog, snapping iPhone pictures while Starving Weirdos underscored my experience of this disconnect.

This California duo’s tunes hang loose, wide open and wide-eyed; songs from their last few albums feel like happy accidents wherein a grab-bag of instrumental chaff haphazardly fell prey to something resembling an organizing principle. (Older tunes like “Blood On The Boardwalk” are the stuff of nightmares and, possibly, malnutrition.) There’s a warmth and mystery to what primary Weirdos Brian Pyle and Merrick Mckinlay get up to, a sort of Northern Californian statis so fragmented and diffuse that it seems to illuminate itself from within, and to wilt without the benefit of a quiescent context to thrive within.

Weirdos albums don’t happen to anyone all at once; from the pagan ache of Into An Energy to the haunted swirl of Rolled in the Midst of Never-Ceasing Currents Flowing Without a Rest Forever Onward, some degree of insinuation is involved. Land Lines’ provenance, if it can be said to have one, is the secondary colors and limitless vistas of New Age; the album should come with an “Insight Seminar-Approved” sticker on its cover, even if its early airy lightness gives way to an incense-shrouded darkness as the end draws closer.

There are unmistakable vocals on “In Our Way”—incanting “in our way,” again and again, as if lost in a trance—and the song itself falls somewhere between a limpid doper’s evaporating sigh and serpentine slither, its undulations beckoning or sluggish depending on what’s brought you here, what you’re seeking. Slightly more purposeful, “Meditator” makes pointillist hay of synth ping and amplifier buzz, trailing off into silences then drifting back; it’s like the best bits of Telecult Powers and Bardo Pond, distilled, a deity dreamily drawing fading shapes on a reeling, bloodshot horizon that’s actually a celestial Etch-A-Sketch.

“Dreams, Endless” suggests an overall sense of dollops and strings of sound descending slowly from above—piano dolor drizzle, wind instrument sounding, sawing strings, incensed keyboards—as insects dart hither and fro, a damp night jungle on a stained-glass cathedral of an album. (See also the surreptitious tribal drone of “A Change In The Lexicon,” where the refrain “the actual object is replaced” becomes more ominous each time it’s repeated.) “Captured”—funny, guys—witnesses ghosts wheeze and swoop through acoustic plectrums and daft harps, a wayward mood piece to nowhere, really, until suddenly it just isn’t, a drum trap arising from the ambiance with a studied, shuffling rhythm, sleepy R&B horns pin wheeling mournfully, icy vocals Slinkee’d out in a coo that stretches for miles; it’s the longest, loneliest, empty seven minutes ever, and when it’s over, there’s really nothing else to do but play it again.