Springsteen Offers More of the Same on High Hopes 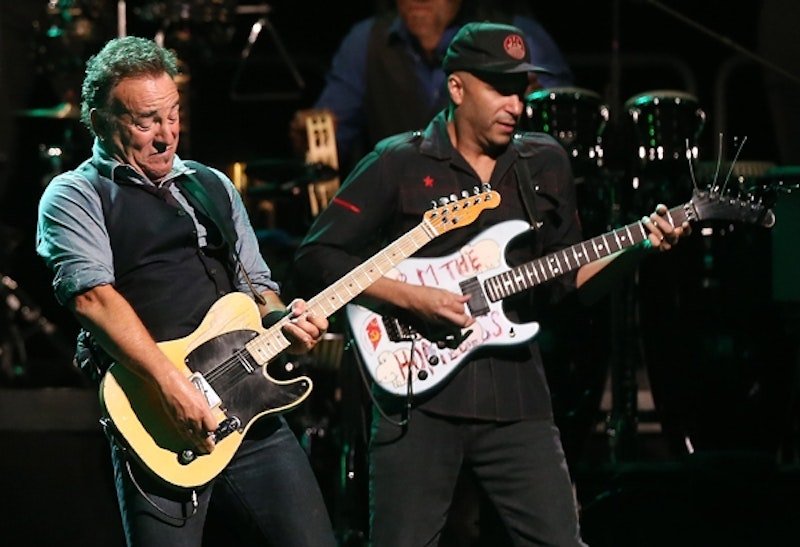 Bruce Springsteen’s new album, High Hopes, briefly popped up for sale on Amazon more than two weeks before its official release date. High Hopes is conceived somewhat differently from Springsteen’s last few efforts; instead of new material, the album features a couple of covers, re-recorded tracks from the unreleased vault, and studio versions of songs he’s trotted out in live performances. A new collaborator, Tom Morello of Rage Against the Machine, apparently acted as Springsteen’s “muse, pushing the rest of this project to another level.” But this hardly matters—Springsteen’s central project has hardly changed in 30 years, and it’s hard to imagine at this point what “another level” would even look like.

Early Springsteen music was filled with grins and experimentation, tempo shifts and an elastic appreciation for funk. On his third album, 1975’s Born To Run, he began a process of narrowing his focus, thickening his sound, and building a recognizable sonic brand. He traded in the winking “E Street Shuffle” for a somber power-strut. Aside from “Tenth Avenue Freeze-Out,” Born To Run trafficked in sturdy, symmetrical song structures built for busting through walls, or at the very least, scaling them.

After the success of that record, the once-lithe Springsteen permanently muscled up, becoming more literal and more serious. He gave away songs he wrote that didn’t fit with this style (like “Fire,” which he graciously passed off to the Pointer Sisters), didn’t release them, or put them on the jumbled double album The River. He honed the down-tempo, somber ballad, led by piano or guitar, and the thunderous march that crests and falls in cathartic waves (played on a keyboard if it’s 1984’s “Born In The U.S.A.,” some strings on 2002’s “Waitin’ On A Sunny Day,” or a fat guitar on “Radio Nowhere,” from 2007). Through the 80s, his two-pronged attack resulted in a consistently effective formula; since then, it’s been more hit or miss.

But the point is it’s always Springsteen, whether it’s got cavernous 80s production (Born In The U.S.A.) or vocal assistance from a former member of the soul duet Sam & Dave (Human Touch). Even the beloved Nebraska, a 1982 album of demos that Springsteen decided to release as-is—without full-band treatment—doesn’t sound that different. It’s got the slower numbers, the hard-chargers; all the identifiable bones are there, he just didn’t bother to scale them up in the studio. In between the 19-song excess of The River and the bombast of Born In The U.S.A., Nebraska seems like a wild departure. But it’s just Springsteen doing his thing with a smaller budget and less equipment.

There are a few flashes of difference on High Hopes, maybe stuff that Morello contributed. The title track starts with a synthetic sounding drum, a hand-percussion pulse like the one on the Stones’ “Sympathy For the Devil,” and harsh, discordant guitar sounds. A massive horn section unfurls during the chorus, slightly off-kilter. “Heaven’s Wall” gets a carnival-like opening, with a lot of voices and Latin-inflected percussion. (Maybe Springsteen listened to the new Arcade Fire album—this makes karmic sense, since Arcade Fire used to emulate him.) But “Heaven’s Wall” soon discards these sounds in favor of big, strum-happy Springsteen.

In addition to the usual rock ‘n’ roll arsenal of instruments, High Hopes contains strings, horns, backup singers, and possibly something bagpipe-like on “This Is Your Sword.” “Just Like A Fire Would” channels the old NBA on NBC theme song in its riff and orchestration, grand and sweeping. There’s a fiddle and organ breakdown in “Down In The Hole,” which echoes the dark, steady tick of “I’m On Fire.”

Springsteen often writes songs about characters that culture, both popular and political, consistently ignores. High Hopes includes “American Skin (41 Shots),” a song written more than a decade ago in response to the shooting of Amadou Diallo by police officers in the Bronx and not released on a studio recording until now. (In recent shows, Springsteen has been dedicating the tune to Trayvon Martin.) Springsteen also adds “The Wall,” a tragic, largely-acoustic number about a soldier who died in Vietnam, which might connect back to the dead brother of the main character in “Born In The U.S.A.” “The men who put you here eat with their families, in rich dining halls,” sings Springsteen. “Apologies and forgiveness got no place here at all, at the wall.”

For each of his slower or more ornate numbers, Springsteen likes to compensate with a withering blast of guitar rock. So “The Ghost of Tom Joad” builds into something edgy, vicious, gnarled, and, at 7:29, too long. He screams and crashes his way through “Frankie’s Fell In Love,” the album’s shortest, sharpest song, which could fit easily onto any post-’78 Springsteen album. And he drops some obscenities into “Harry’s Place,” a hard-nosed tune that chugs along, lean and low to the ground.

Like “Harry’s Place,” Springsteen keeps on chugging, releasing albums that hover around the same quality and take on similar topics. He offers the comfort of the familiar.