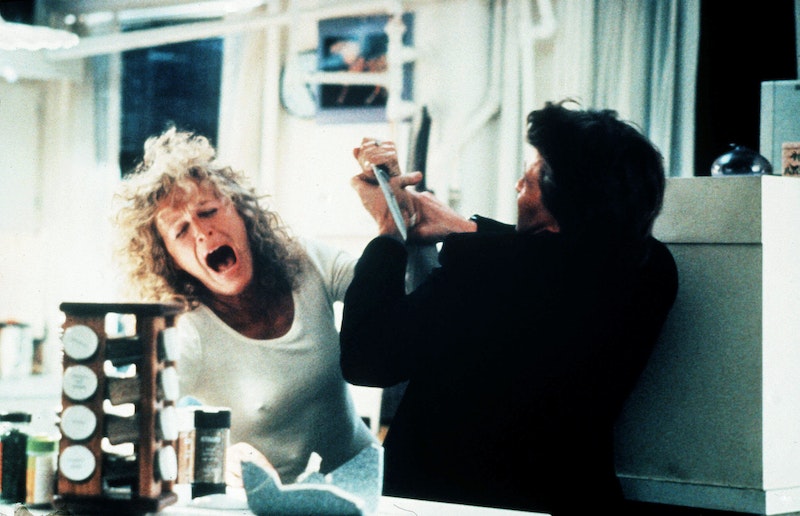 “Erotic ‘80s” has a more familiar structure for the show: subtextual film analysis and sociopolitical critique. Films covered include Body Heat, 10, The Postman Always Rings Twice ‘81, Jagged Edge, Fast Times at Ridgemont High, Porky's, Flashdance, and Fatal Attraction. Longworth is usually on the mark, but her interpretation of Fatal Attraction took me aback. This was the highest grossing movie of 1987, a pop culture touchstone that I knew about before I turned 10 (likely from VH1’s I Love the ‘80s). I knew about the boiled bunny during the Bush administration. It’s the kind of thriller that was abundant in the 1980s and 1990s, and as Longworth goes through characters played by Kathleen Turner, Jennifer Beals, Bo Derek, and Jessica Lange, she illustrates a clear pattern of sexual abandon and/or confident independent women thwarted by reactionary forces, whether they’re political, social, lethal, or fatal.

Kathleen Turner is a proper femme fatale in Body Heat, and William Hurt does become Icarus when he meets her. But Longworth—and producer Sherry Lansing, among others—express a level of sympathy for the character played by Glenn Close in Fatal Attraction that borders on delusional. She's mentally ill and a danger to herself and others. She and Michael Douglas have a weekend fling. She knows he's married. When he tries to leave, she cuts her wrists (sideways), and gets him to stay the weekend. What follows is a familiar scenario that millions of men and women live every day: domestic violence, gaslighting, and emotional manipulation. If Douglas did the same to Close—show up at her job unannounced, kidnap her daughter, kill her pet bunny—no one could call him anything but a monster.

I completely disgaree that Close plays a "supernatural monster" as Longworth suggests. The film may have been more powerful, if not better, if it ended with Close's lifeless face underwater starring into Douglas and the audience's eyes. But when Anne Archer shoots Close dead, it's enormously cathartic, hardly an act of vigilante justice out of Death Wish. Longworth also says that "there's no indication that there's a gun in the house or that Archer knows how to use it," both incorrect and sexist: there's a close-up of the gun in a drawer less than ten minutes before it's used, and why assume "the man of the house" is the only one that knows how to use a gun? The ending of the movie does reinforce the idea that Douglas, and men writ large, are at the mercy of the women in their lives, whether it's their mistresses or their wives—they'll save the day, not the guy.

The idea that Fatal Attraction is a venue for men to vent their hatred and resentment toward women writ large is absurd—it’s a revenge fantasy for all of the psychotic lovers and exes most of us have had to deal with. The behavior Close demonstrates in this movie is out of touch with reality from the beginning: she knows she’s sleeping with a married man, and even if she’s totally dishonest about her “love" for him (she isn’t), the idea of trapping a man with a pregnancy when he’s got a wife and kids at home “because that’s what’s fair” isn't fair in any known universe. Close is not a typical “career woman” constantly denigrated by her male (and female) colleagues; she’s not Melanie Griffith in Working Girl, and no one is treating her like she’s in 9 to 5. This is an unstable, unwell person in need of treatment and isolation, for herself and others—not a newborn baby!

It’s not an unreasonable response to want Close dead by the end of Fatal Attraction: Douglas confesses to Archer and after a brief fight, they realize the severity of the situation and Close nearly kills them. Archer comes in with a gun just before she can stab Douglas to death. It’s a glorious, righteous movie kill, and the fact that Close is a woman doesn’t save her from being a psychopath. She isn’t supernatural, and she’s all the scarier for it: this is a woman, or a man, many of us know or have known—and again, I wonder how interpretations would vary if Douglas followed Close around and terrorized her family. In the 1980s, reactionary and conservative cinema was everywhere in America, with the prime example, Top Gun, recently revived. Fatal Attraction is only of its time in a literal sense: unlike The Bonfire of the Vanities or even Working Girl, this is a movie that could take place in any decade with little alteration.

1945’s Leave Her to Heaven is the closest it comes to Fatal Attraction, with Gene Tierney playing an even more disconnected and cold killer than Close. They’re the same kind of psycho, a person who must have someone else all to themselves, no matter the cost—a vampire. To suggest that Close’s behavior in Fatal Attraction is anything other than criminal and dangerous is sexist itself: can a woman not simply be out of her fucking mind anymore?