One would get the impression from watching that the Chauvin trial started almost immediately after the unrest. 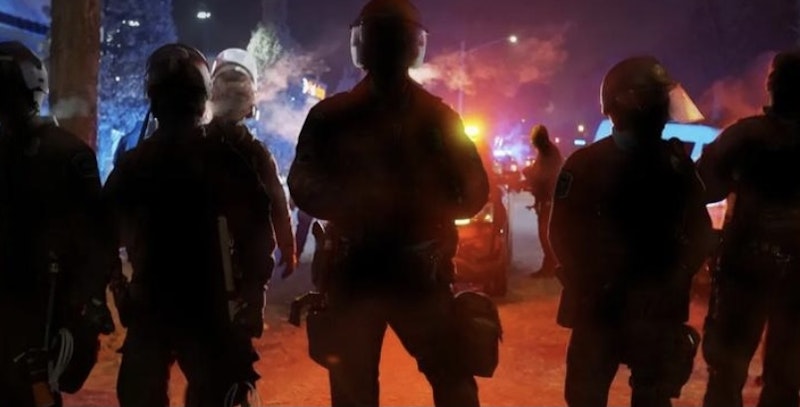 Back in May, Spike Lee posted a picture to social media of him standing in Minneapolis' George Floyd Square, near the spot where Floyd was killed in May of 2020. As a Minneapolis native, the photo piqued my interest. Might Lee be in Minnesota to shoot a project? Maybe one of those sprawling, four-hour documentaries for HBO that he previously made about Hurricane Katrina, New York City between 9/11 and Covid, and others? Was Lee going to apply that treatment to the killing of Floyd, maybe tying in decades of regional history? It turned out there's no such film, and Lee's visit to the Twin Cities was to participate in an NFT conference.

However, just past the second anniversary of Floyd's death, there are two movies about the killing and its aftermath. Although both are considerably less sprawling than what Lee probably would’ve done. The first is Police on Trial, which recently debuted on PBS. A collaboration between the Minneapolis Star Tribune and the PBS’ Frontline, it's a fine examination of Floyd's death, complete with all the background of what followed. Directed by Mike Shum, the film follows the killing of Floyd, the protests and unrest, and the year that followed, including the high-profile trial of Derek Chauvin, as well as the political fallout.

The Star Tribune won a Pulitzer Prize for its reporting on Floyd, and we see on-the-ground remembrances from various Star Tribune reporters, in the tradition of those The New York Times Presents…documentaries that Hulu has been doing. The star of the show is Libor Jany, the star cops-and-courts reporter who recalls getting the first phone call telling him that the Minneapolis Police had killed a man. (Jany has since left for the Los Angeles Times.)

The film isn't that clear about how much time is passing. One would get the impression from watching that the Chauvin trial started almost immediately after the unrest, as opposed to 10 months later. It's sort of like a Law & Order episode, in which the arrest and the murder trial are separated only by a commercial break. Perhaps Police on Trial's most intriguing aspect is how it shows the political moment that was missed. Several City Council members in Minneapolis, in the days and weeks after Floyd's death, joined in calls to defund the police, or at least to "reimagine" how the police would function.

The film reaches the conclusion that the politicians who called for defunding didn't have a plan for delivering meaningful change—and a ballot referendum that would’ve switched the Police Department into a Department of Public Safety went down to defeat the following year. Jacob Frey, the city's anti-defund mayor, was re-elected, while several of the council members who’d supported the defund pledge lost their seats.

Also out now is another new movie, a much stranger one, about Minneapolis and Floyd. It's called When George Got Murdered, directed by Terrance Tykeem, and it's set in the immediate aftermath of Floyd's killing, in the jail where Chauvin was taken. It's almost certain to go down as the only movie about Floyd to feature more than one member of the cast of Happy Days.

The film draws inspiration from a real-life news story, when eight people of color who worked as jail guards sued, claiming that they were forbidden from guarding Chauvin. It's kind of a shaggy affair, but with the news on every TV, it does recall those days in May and June of 2020, when it seemed the world was spinning out of control. The film stars, of all people, Montel Williams as a Minneapolis cop-turned-jail guard, who spends his entire performance seated at his desk. The eclectic cast also features former Arli$$ star Robert Wuhl, as well as Donny Most—Ralph from Happy Days—as a jail guard. Also in the cast are rapper Beanie Sigel and former Philadelphia news anchor Dawn Stensland-Mendte.

When George Got Murdered is barely over an hour long, including a 10-minute introduction and a 10-minute concluding series of Zoom recordings of well-known people—from Ron Howard to Sister Helen Prejean to the guy who played Vito on The Sopranos—to share where they were when they learned of Floyd's death. The film is set for release June 14 on VOD, timed for the latest trial of officers in the Floyd case, although the trial has now been pushed to next January.