Charles Elton’s Cimino: The Deer Hunter, Heaven’s Gate, and the Price of a Vision is a fine biography about a misunderstood and scapegoated artist. 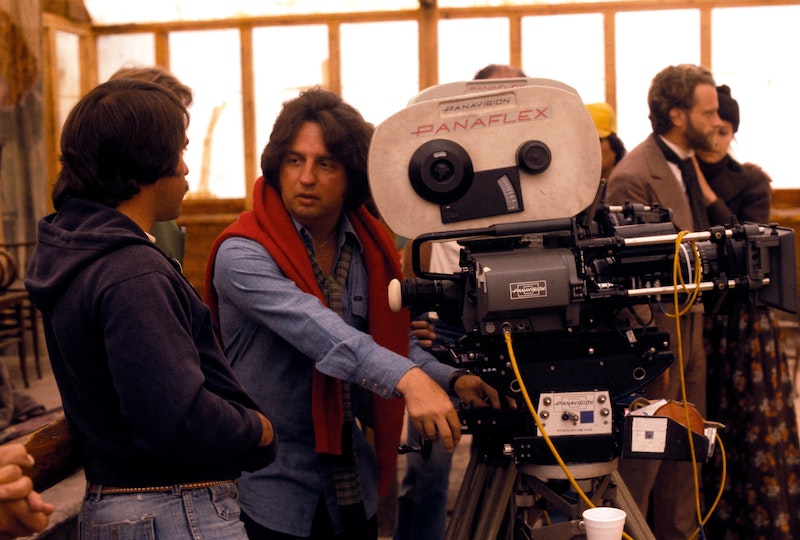 Reading profiles and articles about celebrities published before 2014 can give you whiplash, and examples abound, but consider Michael Cimino: cast aside by Hollywood, the press, and the public after the disastrous 1980 release of Heaven’s Gate and several flops, he became reclusive and gradually began to resemble a woman. Rumors of sex reassignment surgery were abundant, and Vanity Fair published an article on Cimino in 2002 called, “Michael Cimino’s Final Cut.” This is a guy whose worst “crime” was going over budget on a few films and aggravating studio executives. The press turned on him when he wouldn’t allow reporters onto the Kalispell, Montana set of Heaven’s Gate (one guy did sneak in and delivered an exclusive that began the hurricane of hate against Cimino). He never conned the public: his three-hour cut of The Deer Hunter is the one that won Best Picture, Best Director, and Best Supporting Actor, not the shorter cut the studio fought for up until its release.

Whether or not Cimino was transitioning, the press ate him alive for the rest of his life. His radical plastic surgery was hard to ignore, but he didn’t get that treatment in Europe, where he was adored like so many American directors who are taken for granted or dismissed at home. Charles Elton’s new biography Cimino: The Deer Hunter, Heaven’s Gate, and the Price of a Vision is the first major sympathetic work on the director, who died at home in 2016 of unknown causes. Elton makes a point at the end to clarify that Cimino died somewhere between June 28 and June 30, not July 2 as it read in all his obituaries and still reads on his Wikipedia page. Elton also clarifies that, according to one close friend, Cimino was a cross-dresser with a female alter ego (“Nikki”), not a transgender woman: in his own words, “Can you imagine cutting your prick off?… I can’t stand mutilation. I mean, tattoos!”

But he also told Gore Vidal he’d become a woman “if I thought it would do any good.” And another friend said, “Michael was a perfectionist. If he couldn’t come out looking like Catherine Deneuve, forget it.” Elton’s book is a welcome reframing of a disrespected and misunderstood director who was picked as the scapegoat for the creative collapse of the American film industry in the 1980s. When Heaven’s Gate failed, no one was behind him—finally, the tyrant who insisted on 80 takes and non-stop work could be taken down, because he was no longer profitable. Elton makes a great point when mentions the Wachowski sisters, who both transitioned after The Matrix and its subsequent sequels. Although those sequels disappointed most, they made money, and they’ve been spared from the venom of everyone besides stump-brained bigots. Everyone abandoned Cimino, and he never made another movie that even came close to The Deer Hunter.

Although Elton never made it into the Hollywood Hills home that Cimino lived and died in, there are bits of details given by notorious myth maker (liar) Cimino himself: a room full of screenplays and novels that will go unmade and unpublished, a room that Cimino can’t bear to look at. Joann Carelli was his soulmate and producing partner, a mercurial righthand woman who has rarely given interviews but cooperated somewhat with Elton. She tells him, “You’re not going to get anything out of me,” but she’s so motor-mouthed and scatterbrained that information and clues spill out, intentionally or not. She knew him better than anyone, most likely, even if all of his relationships were completely compartmentalized: the woman he presented to as “Nikki” knew no one else in Cimino’s life. She didn’t even know his real name, and when she dug and found out, he froze her out.

Elton’s biography is unfortunately riddled with typos and factual errors: he says that Clint Eastwood directed The Beguiled, not Don Siegel; he mentions Bertolucci’s The Last Emperor as a film made in the 1990s; and for a biography about a relatively niche American director, do we really need an explanation of what the Criterion Collection is? Elton’s book has too much Filmmaking 101 junk that clogs up a thin book, but his research is great and he’s able to maintain a tone that never goes into idolatry or moral tirades. He simply insists that this was an artist who never abused people, but worked at his own pace; he was a profligate fibber and shut out the press, but the vitriol returned was insane; and that Cimino’s Heaven’s Gate didn’t bankrupt United Artists—it was merely sold to another conglomerate and made a modest profit of $22 million in the year after Heaven’s Gate. Steven Bach’s 1985 book Final Cut was the legend printed, and although Cimino and David Field nearly sued for defamation, they moved on and the image of Cimino as a Napoleonic monster stuck.

The rest of his life was mostly conducted in private, and even if Year of the Dragon is a gorgeous movie, it’s not as well-made as his previous work, and the script isn’t so good; they would never get better. Elton recognizes that Cimino was full of himself and often incorrect, and in my own research, I’ve found clips of Cimino insisting that, if given the opportunity, John Ford would’ve shot all of his movies in color CinemaScope “because the West isn’t vertical, it’s horizontal.” An educated guess, I suppose, but Ford made movies in CinemaScope and hated it (“I can’t make a movie shaped like a damn tennis court!”). In a conversation with Burt Kennedy, he conceded that 1:85 was okay, but still a compromise from the Academy ratio of 1:37. Only when Cimino says something so wrong do you begin to doubt all of his other stories.

But who cares? He wasn’t a politician or public servant. He didn’t owe anyone anything. Gene Shalit had the gall to ask him if it was “obscene” to make a movie for $40 million when “American families are starving.” Calmly, he asks back if it’s “obscene” to spend money to make “a blatantly commercial project” in order to make more money. Deaf ears. Elton’s Cimino is a fine book but still feels lacking, like Cimino’s aborted career. He got as close as he could, but so much remains conjecture, and the book at least has some previously unknown friends. Like all director biographies, the ending is inevitably sad, a man unable to work and practice his craft. Practically being pulled off the stage at a retrospective Q&A in Europe in 2015, he dismissed an organizer who said there was another film to show. “So what? You think it’s going to be more interesting than this? Another question.”