Jurassic World: Dominion is another awful sequel in an increasingly fragile franchise. 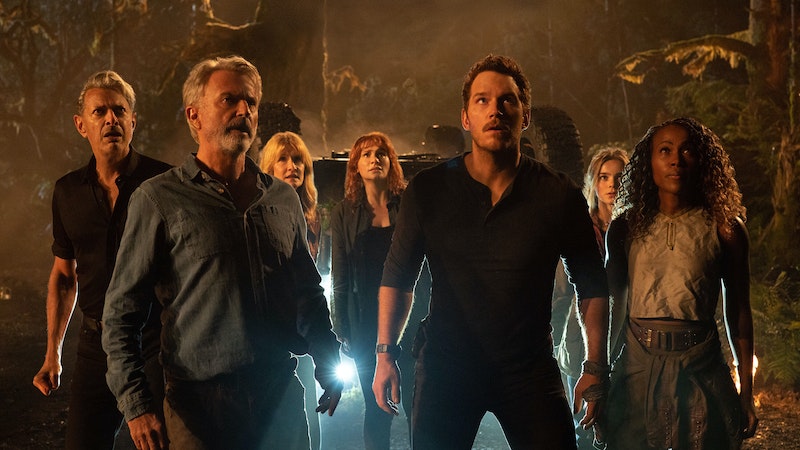 There's a good reason why Steven Spielberg's original Jurassic Park movie, from 1993, is a classic, and none of its five sequels have come close. The original movie was able to conjure a sense of wonder, of humans and dinosaurs sharing the Earth, while each subsequent film has just been about taking that conceit as a given. I think of that every time I see that famous ad that plays at the top of each AMC movie presentation, featuring Nicole Kidman telling us that movies "take us to a place we've never been before.” She says this just as the logo flashes for the fourth (or possibly fifth) Jurassic Park movie, in a place we’ve been many times.

It doesn't help that the recent movies have been mostly terrible. The series was rebooted in 2015 with Jurassic World, a box-office behemoth although it wasn’t good. The second one in 2018, Fallen Kingdom, was so forgettable that I first thought this year's was the second one. Then I assumed I had missed Fallen Kingdom so I went back to watch it last week, when I realized that I’d seen it before. Now we have Jurassic World: Dominion, the final movie in the trilogy, and the worst one. It's a disjointed mess, plagued by a MacGuffin-filled plot, mediocre action sequences, and a lack of dramatic stakes.

Colin Trevorrow, who has never made a good movie, returns to the director's chair after sitting out Fallen Kingdom, and the idea here is that the casts of the old and new trilogies have reunited. Second trilogy stars Chris Pratt and Bryce Dallas Howard are joined by Sam Neill and Laura Dern, who are returning from the 1993 movie. Jeff Goldblum, who came back in Fallen Kingdom, is back, as is B.D. Wong's scientist character, along with several new characters. These are a lot of characters to keep track of, and the film doesn't do a great job juggling them. The plot’s convoluted, as the characters have to stop an evil corporation from using dinosaur DNA for profit.

It's good to see the old characters, especially Wong's long-conflicted scientist, and Goldblum's "chaos expert” Ian Malcolm, one of the better characters Goldblum has played. Isabella Sermon is given a compelling arc as young human clone Maisie Lockwood, and DeWanda Wise steals some scenes as a new character who aids the others with her flying skills. As for the others? These movies have used Chris Pratt in the wrong way—as a lunkheaded action hero who doesn't get to be funny or charming. Pratt often has chemistry with female co-stars, but doesn’t with Howard.

It doesn’t help that the action scenes are terrible. It’s been a great year for action-adventure cinema, with Ambulance, Top Gun: Maverick and RRR breaking new ground with filmmaking technique. The action sequences in Dominion look like crap, especially a shaky-cam-dependent trip through the streets of Malta. After watching something as exciting as the final mission in Maverick, especially the way it actually makes sense in terms of spatial continuity, it’s hard to go back to something incoherent like this.

The plotting isn't much better. I never cared why the characters were going from one location to another, and groups of characters keep disappearing for long stretches. And shades of Star Wars: The Rise of Skywalker—a film that Trevorrow, at one point, was slated to direct— Dominion takes a massive revelation from the second movie and retcons it out of existence. While also raising some bizarre ethical questions that the film’s not prepared to address. There's some half-assed satire of Silicon Valley, as the evil corporation's lair looks a lot like Apple Park, and its villainous CEO (Campbell Scott) bears more than a passing resemblance to Tim Cook. And while we're going to get movie villains based on Elon Musk for the next 10-15 years, Dr. Lewis Dodgson doesn't have much in common with Musk, even if he does have a Hyperloop.

Jurassic Park: Dominion was in production for a long time; it started filming in February of 2020, broke for quarantine, and started again under stringent conditions. Those conditions inspired another movie, Judd Apatow's misbegotten comedy The Bubble, which already debuted on Netflix this spring. The Bubble is one of the few movies this year that's worse than Dominion.