Yet Another Philip K. Dick Ripoff

Source Code may be dumb Hollywood sci-fi, but is there more to it than that? No. No, there's not. 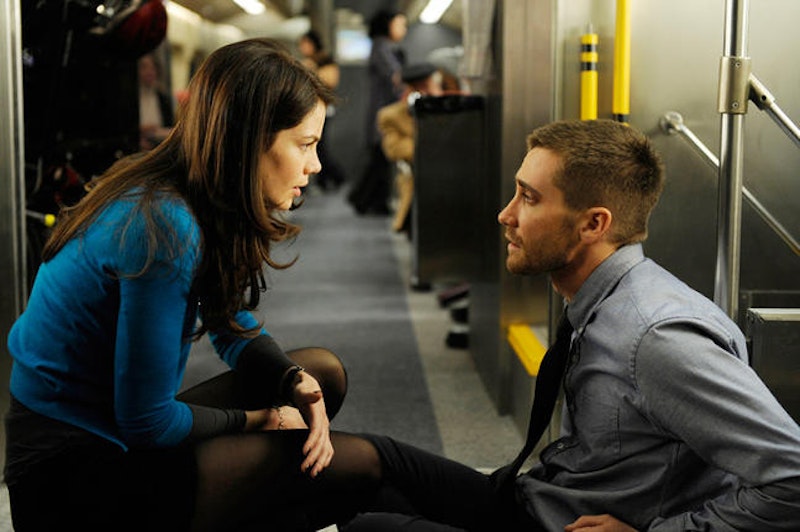 Source Code marks a watershed moment in Hollywood’s assimilation of Philip K. Dick. From direct lifts like Blade Runner and Total Recall to bastardized second-hand derivations such as The Matrix, PKD’s obsessive relationship with reality and that reality’s breakdown has become a staple of Hollywood sci-fi.  At one time, a sci-fi movie meant ray guns and spaceships and hyper-warp-drives and green-skinned girls who needed to be taught the meaning of love. And I guess they can still be about those things, more or less…but generally everybody prefers it if the green-skinned girl is a mental projection of an android locked in a magic matrix. Heroism is best when sprinkled with paranoia, and technobabble is always improved when leavened with facile ontological speculation.

And so Source Code. This movie is not based on a PKD novel or story. It’s just a dumb Hollywood film, and a dumb Hollywood sci-fi film is now a sci-fi film that includes PKD as part of its DNA. Director Duncan Jones has nothing to say about being or reality—not even something stupid to say, like The Matrix. The PKD elements in this film have no meaning. They’re there for the same reason that Michelle Monaghan is playing a blandly spunky nonentity named Christina and for the same reason that Jake Gyllenhall has that stubble and raffish smile. None of it is intended to make a point or prompt a thought. It’s included solely because it’s what you want from your movies.

Not that I hated the film. After all, I’m a lot like everybody else. I think Michelle Monaghan is cute, and, what the hell, Jake Gyllenhall too. Moreover, there is something breathtaking in the film’s self-referential glorification of its own rampant insubstantiality. The pseudo-scientific explanations are delivered with an insouciant bone-headedness; someone babbles about parabolic logic and after-images in human brains and then, hey presto! Our hero Colter Stevens goes back to relive the same eight minutes in somebody else’s life before a Chicago commuter train blows up. Why? How? Is he reliving the actual destruction of the train? Is he reliving a memory? Who knows? Who cares?  The point is…err? What exactly is the point?

There are various ins and outs and you learn The Shocking Truth About Colter at one point and there are moral dilemmas and whatnot. But! Eventually Gyllenhall/Colter/Sean gets the scene perfectly right by (a) saving the world as per the action/adventure genre, and (b) acting all cute/nutty/in-touch-with-his-feelings and thereby sweetly connecting with the girl of his dreams as per the romantic comedy genre. The gratuitously preposterous manner in which the happy ending is dropped from a great height upon our protagonists is not a mistake or an oversight. It’s the film’s entire purpose.

PKD saw the gaps in reality as disturbing and ominous—a sign of our distance from God and truth. But Hollywood doesn’t fear unreality. On the contrary, ersatz pasteboard is Hollywood’s glory. Reality isn’t real, you say? That just makes it so much the easier to jury-rig the requisite inspirational conclusion! For Source Code the plot hole is the basic blueprint of existence. It’s the idiocy that assures us that—for half an hour at least, and in the movie’s own words—“everything is going to be okay.”