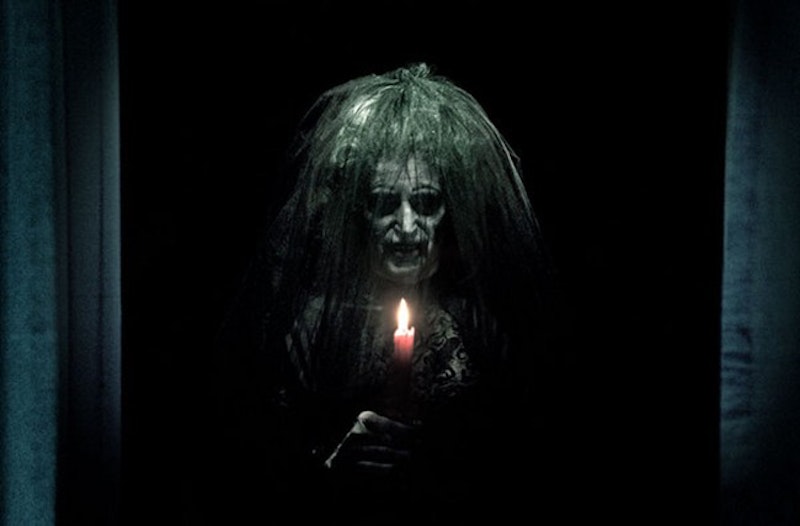 Great horror films connect supernatural terrors to real-life terrors. Whether it’s Rosemary’s Baby and pregnancy, Fire Walk With Me and incest/abuse, or Shivers and sex, the point is not only blood and death, but also guilt and retribution. She has chosen a shallow, careerist husband, and so shall bear a demon baby; he lusts after his daughter, and so shall be possessed; he experiences sexual desire and so shall descend into a Dionysian apocalypse. The movies have an inevitable logic; the repressed returns, the crime is found out, the doom descends. Horror is not about the suffering of innocents; it’s about sinners being devoured.

The main problem with Insidious is that it has no sinners. The protagonists are an adorable nuclear family out of an old-school TV sitcom; loving, slightly artsy mom; loving, overworked dad, three kids (two boys, one infant daughter.) They’ve just attained the American dream and bought a gigantic, rambling house. When one son, (Dalton, played by Ty Simpkins) falls into an inexplicable coma, the family moves effortlessly from sitcom to movie-of-the-week, all of them suffering in undeserved unhappiness with the same bland, predictable sentimentality with which they at first frolicked in deserved joy.

Under some circumstances, a failure like this might suggest a lack of familiarity with horror tropes. But that’s not the case here. Director James Wan (Saw) obviously knows his canon; the movie’s screechy soundtrack harks back to Psycho and everything since and the various startles and shocks are all done with exquisite freak-out timing. For that matter, the dad, Josh (Patrick Wilson) looks so much like Craig T. Nelson, who played the patriarch in Poltergeist, it seems Wan made the casting choice on purpose.

Moreover, Wan does seem to have fitfully noticed that his screen family is too pristine. The script makes some half-hearted gestures at developing corruption within as well as without. The mother, Renai (Rose Byrne) mutters something at one point about how she’s worried that life in her new house won’t be any better than life in the old, and Josh promises her it will. Unfortunately, we never actually learn what was bothering them beforehand (infidelity? termite infestation? peeling paint?), so it’s hard to get too worked up about it.

There are a couple of slightly more effective attempts to sully our heroes. After Dalton has lapsed into a coma, Josh stays late at work at his teaching job night after night. Finally, Renai accuses him of  running away from the problem, suggesting that this is what he always does. The film has up to this point (about halfway through) mostly focused on Renai, but from here on it becomes more and more a story about Josh’s neuroses about being an inadequate patriarch. These neuroses are somewhat undermined by the fact that, if the size of his house is any indication, he appears to make more money than any other teacher in the country. And, besides that, Dad worrying about being a protector is more than a little stale at this point. But better a hoary, poorly conceived anxiety than no anxiety at all, I suppose.

But, no sooner is Josh’s inadequacy introduced than it’s brushed away at tedious length. Various explicators reveal that Dalton is an astral projector; his spirit has wandered out of his body, and various evil critters are attempting to take over. Josh used to be able to project his spirit too—but as a child he was haunted by a creepy old woman who threatened to take him over. He outfoxed her with the help of medium Elise (Barbara Hershey), who got him to forget he could astral project. So the reason he responds to stress by running away from it isn’t because he’s a douchebag; it’s because he was traumatized as a child by evil outside forces. In short, the movie uses its horror tropes to let its protagonist off of, rather than to hang his decaying flesh upon, the hook.

All of which suggests that the director lacks the courage of his convictions. In some sense, that’s probably good, because his convictions appear to be not so much insidious as invidious. When Josh wanders off into the astral plane to save Dalton, the evil spirits he encounters are all smiling theatrical cabaret weirdos; carnivalesque deviants. And the shocking final dénouement involves Josh finally being possessed by that evil old woman. The happy nuclear family is undermined by the father’s unhealthy closeted secret—the patriarch is a woman in a man’s body. Bad things follow.

If Insidious were willing to really embrace the connection between insidious possession and the insidious allure of gender deviance (as, I’ve argued, The Thing does it would be a much better film. It would also be potentially much more offensive. As it is, the movie does little with the gender switch and never suggests that Josh has any actual predilections of his own. He’s just the boring straight victim, fighting for his boring straight family against the somewhat-but-not-insistently queer powers of darkness. Maybe he wins, maybe he loses. With so little at stake, it’s hard to care which.

Thanks to Bert Stabler for his help with this essay.