No One Needed A Grey's Anatomy Musical

Honestly, did that feel right to anyone? 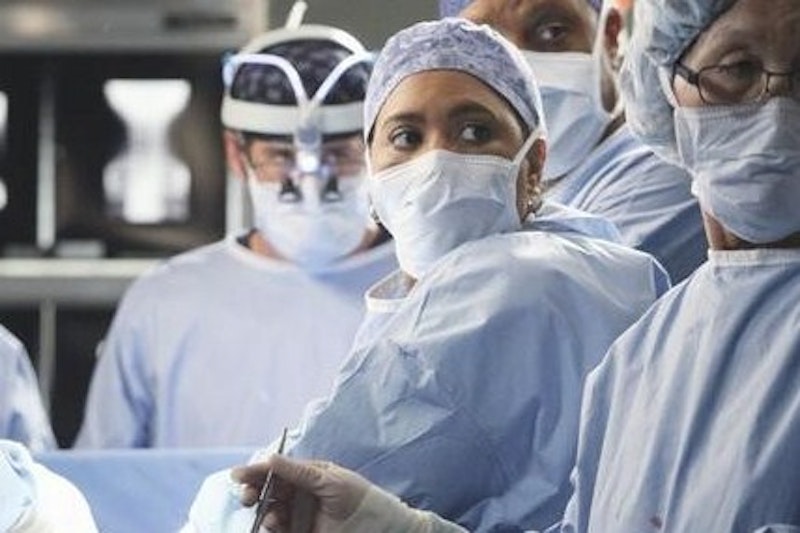 Before I get into the what-the-hell-was-that of this episode, let’s go over the basic plot details:

The previous episode ended dramatically with Callie—who’s pregnant with Dr. Mark “McSteamy” Sloan’s baby—and Arizona heading off on a vacation. Arizona asks Callie to marry her, but before Callie can answer, their car gets hit by a truck.

This episode opens with Callie having been thrown through the windshield, and just barely alive. The trauma causes some weird hallucination where she sees herself and everyone else around her singing songs from Grey’s Anatomy's past.

There must not be any other patients in the hospital, because all of the doctors—including a bizarre and unnecessary return of Kate Walsh as Dr. Addison Montgomery—work to save the lives of Callie and her baby. They succeed, and when Callie wakes up at the end of the episode to find Arizona sitting beside her hospital bed, she tells her yes, she will marry her.

The basic plot of a favorite doctor desperately clinging to life as the hospital staff rallies to save her is the kind of episode that is right in this show’s wheelhouse. So it’s a real shame that they wasted a decent storyline on such a poorly conceived gimmick. There’s nothing that will convince me that musical numbers belong in a show that claims to be a medical drama, but I can respect that Grey’s creator, Shonda Rhimes, wanted to break genre and try something different. It wasn’t so much the inclusion of musical numbers that bothered me, as the inconsistency of the singing premise and the misplacement of songs that are strongly associated with pivotal moments from the show’s past.

Doctors suddenly breaking out into song relies on the episode’s established premise that this is all Callie’s reaction to the trauma she’s experienced. The singing is largely performed by her “soul” who is in the room with her during all of her procedures and operations. That’s fine, but why do doctors continuing singing even when Callie is not around? Why is Lexie singing her way through the hospital as she searches for Mark? Why does she continue singing when she finds him alone in a stairwell and tries to reach out and comfort him? Why is there an entire scene of various Seattle Grace couples singing “Running on Sunshine” to each other, while making out on kitchen counters and hospital beds? If you’re going to establish a premise for the use of song, you can’t break from that premise just because it would be fun to have everyone’s favorite couples dancing around and singing lovingly to each other.

But even more egregious is taking songs that even a casual fan of the show will associate with important moments from past seasons, and applying them here to situations that completely change the meaning of their original use. It’s been a long time since I was a regular Grey’s Anatomy viewer, but even I can tell you that Kate Havnevik’s “Grace,” which Soul Callie sings as Real Callie crashes and is rushed into surgery, originally appeared in a Season 2 finale episode where Meredith and a still-married Derek have sex in an examining room during a hospital prom (my god, this show is ridiculous). And Anna Nalick’s “Breathe (2AM)”, which Chyler Leigh (Lexie) performs well enough while searching for and then comforting Mark, is from the Season 2 post-Super Bowl episode. It plays while Meredith removes a live bomb from the inside of some guy’s abdominal cavity. The song ends suddenly when the bomb explodes and the bomb squad guys are blown to pieces. It’s not that it can’t work in this moment between Mark and Lexie; but it loses all its heft when you compare it to the moment when the song was originally used on the show.

There are elements to last night’s musical episode that are important to storylines moving forward. Firm establishment of a few different relationships, the premature birth of Callie’s baby. An upcoming Callie-Arizona wedding? In moving forward with this season, it would be useful to have seen these things, but they’re certainly not important enough to make this episode worth watching. In the end, it was basically just a medical version of Glee. And we don’t need another version of Glee.