Would You Please Blow Something Up?

The American would have been better if they'd brought in Michael Bay. 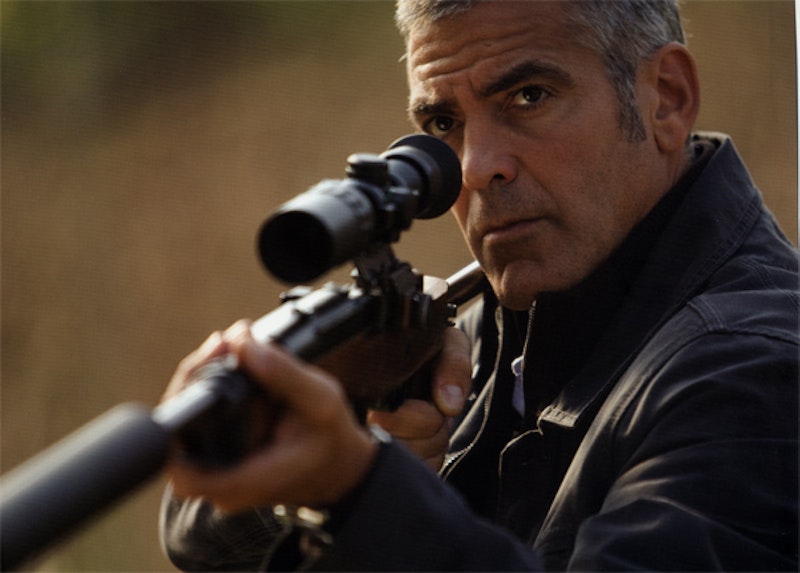 The American opens with George Clooney and an attractive woman naked in bed, which is obviously what we were more or less there to see, so points for that. Shortly thereafter, Clooney commits an evil and cold-blooded murder—and, again, that’s what I want from my assassin movies. Good so far.

Shortly thereafter, though, I began to have suspicions. So, as I do when such suspicions occur, I leaned over to my wife and whispered low, “He’s going to be redeemed, isn’t he?”

She looked at me over her glasses with mingled disgust and horror.  “If he gets redeemed,” she said sternly, “I’m going to be upset.”

Needless to say, he did and she was. But director Anton Corbijn was not satisfied with a single cliché’s worth of suffering. Oh no. Corbijn is the kind of cliché-slinger who won’t sling one cliché when he can sling a fistful and a half. (And yes, there are spoilers here, because I can’t pretend this movie has any surprises to offer that are not egregiously irritating.)

Anyway. Clichés. We have the wise old Italian priest who dispenses wise old wisdom like confession is good for the soul and hell is life without love. We have a prostitute with a heart of gold who falls for her john because he’s just so good in bed (admittedly, you have to figure that any rural backwater prostitute who found herself in bed with George Clooney would feel like she hit the jackpot—but still.) We have a double-cross pulled by the evil-looking guy. We’ve got the last-job-goes-all-to-hell-tragically-before-we-can-get-out-of-town-with-the-girl-to-a-new-life-and-happy-ending. We’ve even got the dying-and-slumping-into-the-car-horn at the fade. Oh, and there’s the totem-animal symbolism.

Admittedly, you more or less expect clichés in an action movie. You sit through them because, hey, you’re not there for clever plot or insight into human nature. You’re there to see things blow up. But here, too, Corbijn is committed to the cock-block. Having been informed in film school that you can make a genre movie profound by systematically borifying it, he has cleverly removed most of the action sequences, and made the ones that remain as mundane as possible. Instead of spectacular FX, then, we get a glimpse into the tortured soul of a flawed man. You can tell he is tortured and flawed because he spends most of the film with that mournful, distracted look you get when you have vague but persistent bowel distress. Sometimes, for variety, when he’s really tortured, he rubs his face.

As my wife pointed out in one of her rare moments of generosity, the film does try to make up for the funereal pacing by throwing in many scenes of largely unmotivated fan service. When things seem just about intolerable, Clooney whips off his shirt and does some push-ups or chin-ups or has some steamy sex with full-frontal Clara (Violante Placido), the aforementioned prostitute with-heart-of who is, herself, really shockingly attractive for a random whore in the middle of nowhere Italy.

But there are a lot of movies I could watch if the goal was just to see pretty people partially (or wholly) nude. The American withholds most genre pleasures, gambling that its insights about good, evil, and redemption are something other than completely and utterly puerile. This is a gamble that it loses.