Six short films about revenge, come what may. 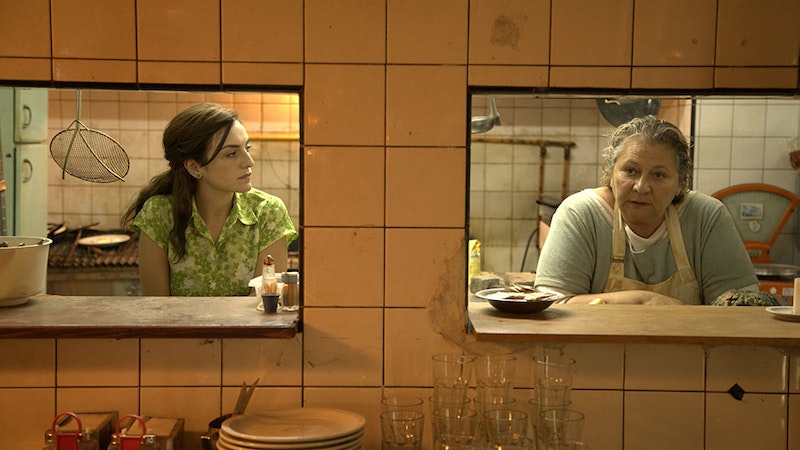 Writer/director Damián Szifrón’s third full-length feature film, the Oscar-nominated Wild Tales, is a brilliant, riotous anthology of six short films, all of them about revenge—political and personal. The movie wastes no time establishing itself: the opening short, “Pasternak,” puts us on a plane, with all the passengers quickly discovering they’ve wronged the same man—“Unbelievable! There’s a cosmic connection here,” his former elementary school teacher exclaims; I don’t think I’m giving anything away when I tell you, not quite.

Wild Tales revels in brutal absurdity—from “Road to Hell,” about extreme road rage on a desolate stretch of highway, to “Bombita,” about a demolitions expert whose life is ruined by a corrupt city towing company. A minimum of backstory is required. It’s enough to watch some over-the-top comeuppance; the aggrieved totally losing it—as in “The Rats,” when a waitress is confronted by a Mafioso who bankrupted her father and drove him to suicide. As the grizzled old cook asks, “Your dad kills himself because of this guy, and you’re just going to insult him?” before taking a box of rat poison out of a cupboard.

In the last (and arguably best) of the six short films, "'Til Death Do Us Part," a bride learns at her lavish wedding ceremony that her new husband has invited his mistress along. More than tears are shed, I'll reveal that much, and in a film with so much fine acting, Érica Rivas (as the jilted bride) turns in a truly stunning performance.

If there's a moral, it's something about unintended consequences: the wealthy father in "The Deal" who pays off a day-laborer to take the fall for his son after a deadly drunk driving accident inadvertently gets the day-laborer killed, as the waitress in "The Rats" nearly kills the Mafioso's son. We all understand the frustrations of bureaucracy in "Bombita," or the taunting insult that sets things off in "Road to Hell," so what we're left with is the thrill of total unhinged rage.

It's easy to understand why Wild Tales has broken Argentine box-office records: beautifully scripted and shot, wonderfully acted, and totally unnerving and hilarious.