It's like 30 Rock had a kid sister who wants attention. 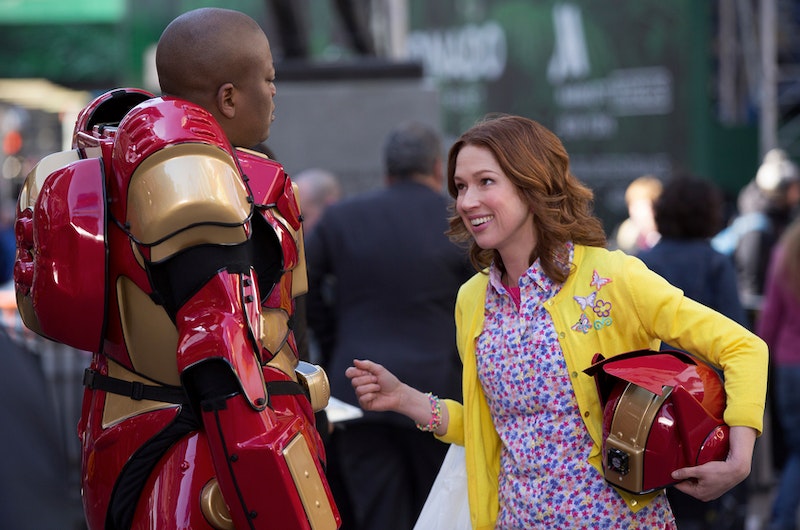 Tina Fey's new sitcom, Unbreakable Kimmy Schmidt, has a tween feel and a lot of jokes, few of them solid (to borrow Liz Lemon's term). Watching the program, you'd think the people who made Ugly Betty had overdosed on 30 Rock and decided they were clever too. They'd show the world: they'd have a series where media jokes went by really fast. Of course, because of Ugly Betty, the series would also have a brave kook and her black gay roommate, and some spoiled rich kids, and messaging about body image.

Tina Fey made that show. Who knew she had it in her? She tried some freedom and went from workplace sitcom to magical-realist sitcom. 30 Rock was set in an office and spread out from there. The new show is set in a Manhattan neverland where people don't spend much time on earning a living. Kimmy doesn't take familiar reality and make it strange. Fey rolls her own right from the start, and the result is a premise with a lot of wobble. The lead has no real job and no place where she has to be. She falls in with people, and they become cast members because format says you have to have a cast.

So far the supporting players fall into three groups, each its own lump that doesn't have much to do with the others. There are the roommate and the crazy landlady, the Upper East Side household where Kimmy nannies, and the bomb shelter we see in flashbacks to her 15 years as member of a crazy survivalist cult. As a set-up for a show, this feels patched together. Worse, the characters are standard, because along with the black gay roommate (bravely failed actor) and crazy landlady (motormouth foreigner), there are the snotty rich girl, a soft-spoken studly tutor, a pathetic aging trophy wife, and a little boy who's just around as necessary.

Usually a reviewer panning a comedy picks out the few good jokes and repeats them. There were some this time around, but they got lost in the crowd. I think one involved the Port Authority renting footlockers as apartments for Japanese businessmen. But really, nothing's left. I just felt heavy by the midpoint of my sixth episode, and at that point I stopped.

What had kept me going were the color schemes, which are nifty and run toward slate green with patches of raspberry or pink planted in the dark. That's my girly side, I suppose. Otherwise I felt out of step with the show. 30 Rock had a lot about men, from Frank the comedy writer to Jack Donaghy. In the new show, men are like jobs, not quite part of the picture. And I don't buy that the late-1990s, when Kimmy went down into the bomb shelter, are that different from now. Politically and economically, yes, of course. But not in a fads-and-follies way, which is the viewpoint the show takes. There's a lot more Internet now, but we're still waiting for the big changes in mindset this will bring.

The cast is fine, for what it has to do. Carol Kane does a wonderful voice for the crazy old landlady. Ellie Kemper in the lead, as the plucky ditz, just doesn't grow on me. She's proficient and can get through all the comedy moves required. But I have trouble remembering what she's like. Jane Krakowski should move on. Her Jenna was wonderful, but here she plays Mrs. Voorhes, who is Jenna with her wings clipped. The same mannerisms get recycled, stale this time around, and they add up to something les satisfying than before. Now the dizzy narcissist calls no shots. She's on the shelf in a mansion, wondering where her husband is.

The show makes so much noise, and everything about it is wrong except for the program's goofy little shoes with raspberry tips. It's like 30 Rock had a little sister who wanted to be funny, and everybody felt sorry for her because of her body type.