Why the Ezekiel Scene in Pulp Fiction Doesn't Make Sense

And why it doesn't have to. 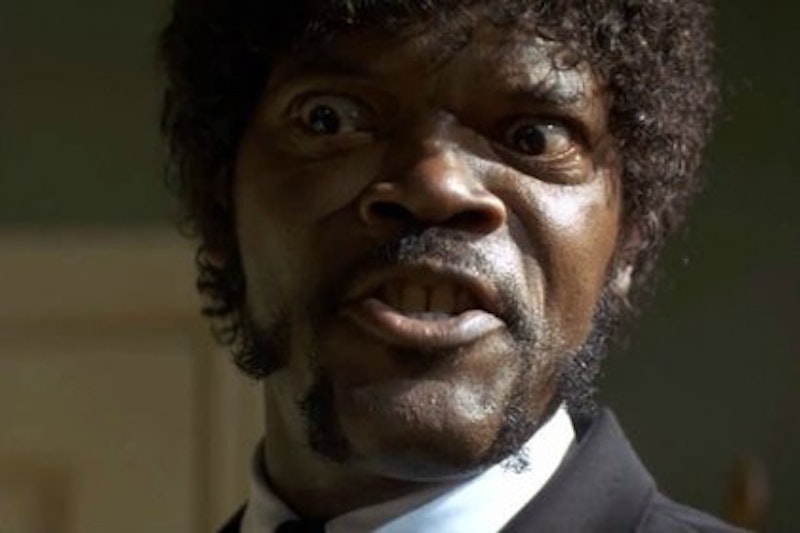 Pulp Fiction has a moment of high opera, an interlude where a very busy character stops everything so he can sing his heart. This is the scene with the big passage from Ezekiel. Jules the hit man, played by Samuel L. Jackson, lowers above his shrimp of a victim and browbeats him to the ultimate (“'What' ain't no country I ever heard of”). By the time he shoots the poor clown, his browbeating has developed whole new gears, become Biblical. He shouts a passage from Ezekiel and his gun thunders (”And you will know my name is the Lord when I lay my vengeance upon thee”).

It's all such a production. The chump and his friends don't pose any threat, and the briefcase has been recovered. Just bullet their heads and get out of there. But no. While Jules keeps himself distracted, a bozo cringing in the next room fumbles a gun into his hands and then walks through the door, shooting away at whatever he sees. That he doesn't kill Jules and Vincent is apparently so amazing that Jules regards it as a miracle. When all he had to do was 1) make sure nobody was in the next room, and 2) get the job done, meaning shoot the people who had to be shot. Instead he kept talking until there was a crisis on his hands. Now his life is toppling off in some new direction because he thinks God has spoken to him.

But the audience doesn't see the Jules flapmouth situation as a problem. It isn't a credibility hurdle, or a sign of some wrinkle to his character. Of course he lowers over the boy and browbeats him to the extreme. We want him to. If we walked into a room and somebody quaked in fear because he knew we’d arrived to kill him, we would squeeze our face into his until there was nothing to do but shoot a bullet in the grease stain that he had become. By “we” I mean most people, when in certain moods. Enough people enough of the time that nobody asks why Jules is pulling this stunt.

In Reservoir Dogs, the plot makes time for Mr. Blonde to dance about a tied-up cop before killing him. Mr. Blonde says what he's up to. In fact he sounds a bit la-di-da: “I don't really care about what you know or don't know. I'm gonna torture you for a while regardless. Not to get information, but because torturing a cop amuses me.” In Pulp Fiction, Jules doesn't have to announce anything. Tying somebody up and slicing off an ear is not an audience dream. It's an audience shocker that's two-thirds horrible and a third fun, and that last bit, the final third, makes the audience feel surprised at itself. Whereas browbeating somebody into nonexistence—that's an audience dream. Act that out and no questions are asked.

My guess is that people spend hours a week jawing away to themselves about what they could have said or should have said. People have plenty of conflict in their lives, almost none of it physical. The combat, to be poetic, is all face slipping over face and seeing which gives way. It's a tiresome business and most people don't feel that good at it. Life would make sense if we could have a Jules moment of our own; then we could be comfortable. In the meantime there're the movies.