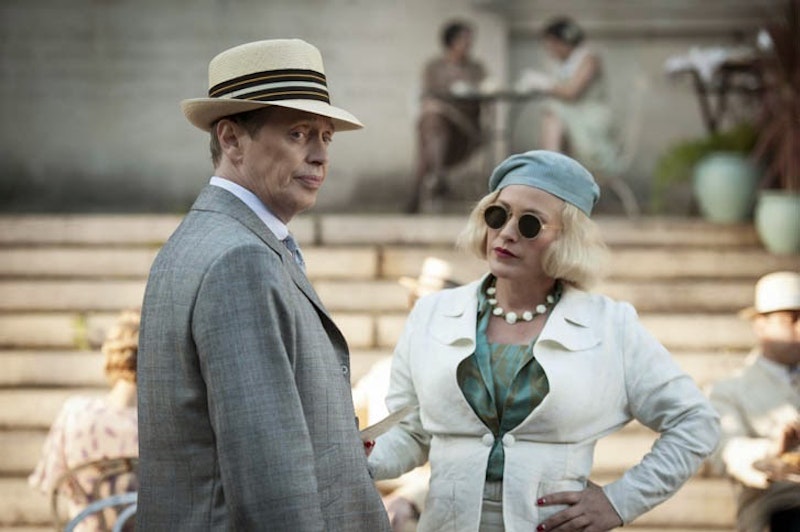 Boardwalk Empire has always been a hard sell. Sure, Steve Buscemi is a cult favorite, and Martin Scorsese’s early involvement (including directing the pilot) earned some buzz, but it’s a slow-burner, and BE never achieved Much Watch status the way, say, Breaking Bad did—the only other TV show in recent years that’s on the same par. It’s also a show with a lot of characters to keep track of, hard to do even if you’ve watched hours of History Channel Prohibition documentaries and know the real-life precedents; Al Capone is easy enough but trying to remember how Meyer Lansky and Johnny Torio fit in can be confusing.

Season four ended with the death of Richard Harrow after a botched assassination attempt on Dr. Narcisse. I wrote about that scene last December, and even though I had some problems with the setup, I thought it was a beautiful send-off to the show’s most interesting character. Season five, the show’s last (which will only run eight episodes, instead of the usual 12), starts off six or seven years later. It’s now 1931. Nucky is living in Havana, and talk of Prohibition repeal has him looking to go legit, as Bacardi’s U.S. distributor. In the premiere, “Golden Days for Boys and Girls,” we find Nucky trying to buy off a U.S. Senator, plying him with cigars, booze and women. Sally is now a trusted partner and Eli is in Chicago, working with Van Alden.

In an interview with Alan Sepinwall, Terence Winter explained why they decided to skip ahead so many years (by doing so we missed, among other things, the St. Valentine’s Day Massacre and the death of Arnold Rothstein):

'31 was really attractive to us for a lot of reasons: Capone went to jail, Luciano formed The Commission, which became the governing body of the mob, it was clear the Depression wasn't going away, and the country was settling in for a long period of economic decline. It was very clear that the party that was the 1920s was over. Even the hemlines were lower. It was a much more somber period of time. And close enough to repeal that it felt like a bookend for us.

It’s hard to say what will happen with Nucky. Unlike Walter White on Breaking Bad, I don’t think fans expect (or are rooting for) Nucky’s death. And as Winter adds in his interview, “Nucky is not Nucky Johnson, and that's all I'll say. They're two different people.” Three episodes in and not much has happened. Narcisse will likely end up at war with Lucky Luciano, and with Chalky on the run I’m sure they’ll be a final confrontation there. We check in on Gillian and find her locked up in an insane asylum—why we're wasting time with her at this point I don’t know.

In one of the best scenes from the premiere, Margaret’s boss, Mr. Bennett—financially ruined by the Great Depression—offers an uplifting speech to his employees before pulling out a gun and shooting himself. Later, Margaret is threatened by Rothstein’s widow, who knows all about Margaret’s illegal deals with her late husband, and also knows that Margaret is the estranged wife of Nucky. She’s looking for money, and threatens to expose Margaret if she doesn’t get it. Episode 5x3, “What Jesus Said,” ends with Margaret and Nucky reunited, and though Nucky gives her a cautious smile, BE has never been much for happy endings.