Why did I see this again? 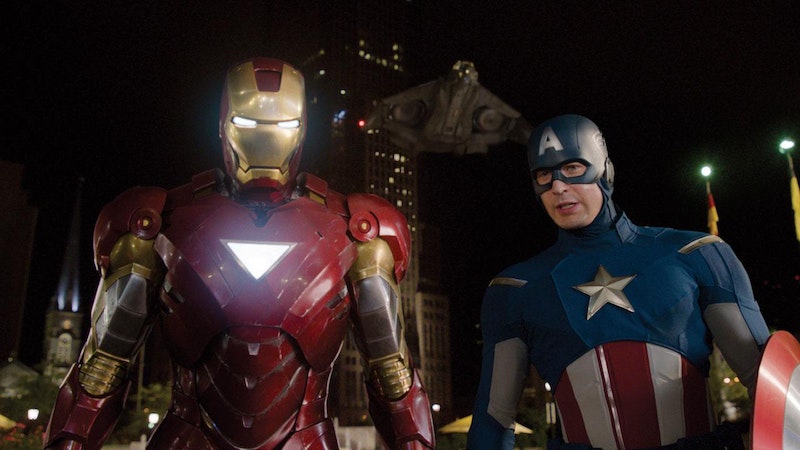 I didn't really have any desire to see The Avengers. Mainstream superhero movies aren't usually great, and the logistics of the team-up seemed likely to make this one even worse. But then everyone told me it was awesome, from my 10-year-old to movie critics. I've seen Buffy so I know that Joss Whedon is hideously overhyped, but I guessed he could make a superhero film that wasn’t entirely wretched. I'm a superhero expert of sorts (I wrote a book and everything). So with a sense of obligation and moderately high hopes, I paid my three bucks, and streamed the greatest superhero movie ever TM.

And having seen it, I have to say—what? This is the greatest superhero movie ever? Seriously? Yes, there are enjoyable bits; Robert Downey, Jr. is pleasingly sardonic, and his screwball comedy moments with Gwyneth Paltrow are fun to watch. Mark Ruffalo brings a low-key, professorial charm to Bruce Banner/the Hulk. Scarlett Johansen in a form-fitting body suit is Scarlett Johansson in a form-fitting body suit, and her stunt double does a fantastic job with that chair scene. The special effects are fine; things blow up.

The movie is not utterly worthless in every way. I'll grant that. But does that mean it's good? Or even adequate? No. The script is a farrago of pseudo-science gibberish stitched together with unmotivated interpersonal tension, as various superfolk engage in pointless swagger-offs using dialogue written by lobotomized chimpanzees, leavened with the occasional moderately amusing in-joke ("puny god!") and Robert Downey Jr.'s ad libs (which mostly serve to make you wonder why they didn't just have him write the thing.) Chris Evans utters immortal tough guy lines like "You're not the guy to make the sacrifice play" with the emotive range of a stuffed herbivore; the best that can be said for Chris Hemsworth is that he's less awful. The usually reliable Samuel Jackson seems marooned behind his eye-patch and his hard-assed superspy ball-buster default; he occasionally gazes with weary, no-nonsense meaningfulness at the camera, clearly seeing visions of being transported to some other movie that does not suck. Tom Hiddleston has been much praised, and he does give Loki some sort of depth, but the by-the-numbers super-villain ranting is hard to overcome; he ends up switching between megalomania and mild whining. Nobody who is forced to lose in a battle of quips with Hemsworth can really be said to be lighting up the screen.

I've seen claims that the movie makes some sort of stand for feminism, and the Black Widow does get to kick ass and is an integral part of saving the world. There's not much else to it, but, sure, it's better than all those films where the strong female hero doesn't actually get to do anything. On the other hand, the overall ideological message is typical superhero half-assed vigilante fascism. Democratic institutions can't be trusted to keep us safe because milksop administrators lack the nerve, so you need to rely on Ollie North types to make the tough decisions and deploy the violent overmen. You're supposed to give a super cheer at the end when Tony Stark dumps an atomic bomb on some distant city of twisted nightmarish alien others who attacked the homeland. Did he hit a military target? A civilian one? Are there noncombatants over there? Eh, who cares as long as Downey gets back safely for the next installment.

Not that the film is morally noxious; unlike The Dark Knight Rises, little thought has gone into its ethics or its message. We replay Hiroshima just because no one could think of anything better, not because Whedon actually wants to make a plea for genocidal violence. The real emotional energy goes into the post-battle celebration, in which we see rows of screens, each filled with bedazzled witnesses trumpeting the superheroes' collective awesomeness.  The spectators watching in the theater or on their computer screens are clearly encouraged to join in, the film functioning as a naked advertisement for itself and its inevitable sequels. On that level, it’s marvelously effective. The hype is still roping in credulous viewers, however much they may regret it afterwards.