Who Would Want to Watch Watchmen?

The much-anticipated film version of Alan Moore’s pretentious anti-comic borrows all his self-importance and none of artist Dave Gibbons’ verve. (Grade: D) 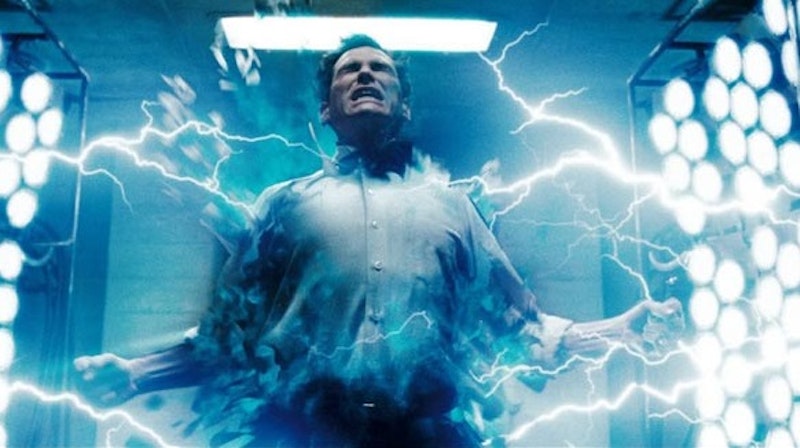 That a film as purposely dank and boringly nihilistic as Watchmen can be made into a major-studio cultural event proves that we’ll rally around any invented icon if it’s advertised heavily enough. Zach Snyder’s exercise in fanboy appeasement isn’t dark and tough like the best noir; it’s dark and ludicrous, and, at more than 160 minutes, unbelievably overlong. The recent raft of Iron Man and Dark Knight acclaim implies that Americans are embracing pulp entertainment again, but it’s hard to get excited about the trend when Watchmen and, to a lesser extent, The Dark Knight are such failures of the pulp sensibility. Ponderous, depressing and badly written, Watchmen could conceivably rouse moviegoers to finally ask why, if we’re currently watching so many action movies, we’re not allowed to have any fun in the theater.

Snyder, along with writers David Hayter and Alex Tse, indulge only the least effective aspects of Moore’s story while simultaneously missing the point of artist Dave Gibbons’ work. As a comic, Watchmen was notable not only for the way Moore layered his multiple narratives, but also for the way that Gibbons stripped Kirby-era superhero scenery of its more fantastic elements—there are no “BANG!!!” or “WHOOSH!!!”-style onomatopoeia or trails in the air as punches get thrown, and this contributes to Watchmen’s celebrated “psychological realism” as much as any of Moore’s multiple back stories. Gibbons’ limited color palette, overtly cinematic angles, and impressive emotional range with faces matched the writer’s thematic ambitions, just as Gibbons’ artistic versatility brought life to Moore’s mixed-media layering technique.

Watchmen astounds because of Moore’s collage of pop references and the narrative depth he manages to cram into his panels, but his humorlessness and pretentiousness make it an ultimately deflating, juvenile work. Bogged down by a now-dated Doomsday Clock/Evil Empire mentality, Watchmen ends by asserting the right of certain triumphant individuals to murder millions in the name of public good, but for a while the mixture of Gibbons’ kinetic work and Moore’s teeming imagination is exhilarating.

Stomping all over the unique, scrappy pleasure of comics—wherein print storytelling is imbued with the visual immediacy of movies—Snyder simply kowtows to the swollen fanboy mob and recreates iconic panels like Natural History Museum dioramas. His screen is so packed with visual details and so juiced with Matrix-aping slo-mo and CGI that Watchmen just feels like a museum piece, as if the creative success of the film somehow rested on, for instance, whether or not Snyder picked the exact poster to adorn The Comedian’s living room wall and not, for another instance, whether the actual character himself is believable or well written. All of Moore’s back stories explaining the characters’ lives are confined to quick flashbacks in Snyder’s film, leaving only the writer’s frequently dreadful dialogue and voiceovers; Rorschach, the roving masked Travis Bickle character, informs us that skanky, pimp-infested New York “screams like an abattoir full of retarded children,” a metaphor that makes less sense every time you think about it.

Rorschach and The Comedian represent two sides of the same humanity-hating coin in Watchmen—the former cleans up the streets by killing thugs and deadbeats, while the latter laughs at the great cosmic pointlessness of it all like a sadistic, violent Democritus. In between these characters’ bitter musings on their own contempt for mankind, a bizarre love triangle forms between Nite Owl (nee Dan Dreiberg), Silk Spectre II (nee Laurie Jupiter, inhabiting her mom’s old Minutemen role), and Dr. Manhattan (nee Jon Osterman). Laurie is dating Dr. Manhattan, you see, though their relationship has some rough patches since he’s a glowing blue quasi-human embodiment of nuclear energy who’s too busy viewing the universe in four dimensions and controlling matter with his mind to attend to daily romantic issues. Dan, a likable nebbish who keeps his old crime fighting gear under tarps in his basement, becomes Laurie’s rebound, and the scene in which they successfully consummate their bond is one of the least erotic, most poorly done sex scenes I’ve ever watched. (Snyder gets additional points taken off for his hackneyed use of Leonard Cohen’s “Hallelujah,” a lovely song that we nevertheless need, as culture, to collectively get over once and for all.)

In the comic, Dr. Manhattan was one of Moore and Gibbons’ greatest creations. Osterman was originally a nuclear physicist who, Hulk- and Spidey-like, becomes trapped in the nuclear device he’s helping build and is vaporized by the radiation, only to appear days later as the nude, Adonis-like blue alien-man who changes size at will. In the film, however, Dr. Manhattan merely looks like Slimer from Ghostbusters as a Blue Man Group member, and his scene on Mars—a wordless, pages-long marvel in the comic—looks like a leftover CGI file from Hellboy II post-production.

These five would-be heroes all get drawn into a master plan by their old teammate and current Smartest Man Alive, Adrian Veidt, a classics buff whose alter ego is perplexingly named Ozymandius. Veidt and Dr. Manhattan are played, respectively, by Matthew Goode and Billy Crudup, two typically charismatic, watchable actors who here get buried in boring, expressionless monologues. This is typical of Snyder’s mishandling of Watchmen generally: he borrows only the faux-intellectual darkness of the story and cuts Moore’s exciting narrative structures; he tries so hard to mimic Gibbons’ individual images that the fussy, expensive-looking result bears no resemblance to the relative flatness that made the comic visually appealing in the first place; and he borrows the wanton violence without appreciating that pen-and-ink renderings of death and dismemberment leave a little more room for imagination than filmed reproductions of same. Transferring a story and characters from one medium to another requires artistic vision and sensibility, but Snyder apparently can’t even discern what made Watchmen good in the first place.

Ultimately, though, it’s the juvenile mock toughness of Watchmen’s morality that undoes this heavy-handed film. From the first scene, blood splashes unrelentingly through the movie’s frames, powered by the characters’ use of butcher knives, circular saws, flamethrowers, Uzis, and other instruments along the way. Yet underneath all this macho gore (misconstrued as “adult” by the same people who feel the need to call comics “graphic novels”), Watchmen’s characters seem inordinately troubled by the nonexistence of god and the rotting of the American Dream—existential crises that Western civilization has been dealing with in different ways for over 200 years. Which is why all of Moore’s end-of-days huffing and puffing is ultimately so silly, particularly when someone like Snyder treats it with such unartful frat-boy affection; if you’re going to remove the nimble pacing and fun from pulp storytelling, you’d hopefully replace with something thoughtful or original. Instead, we’re asked to agree that Watchmen represents some bold leap forward for superhero movies purely because it’s too violent, dense, and millenarian for children—a sentiment that, really, should be offensive to young and old alike.