Wherever You Go, There You Are

On Devyn Waitt’s Not Waving, But Drowning. 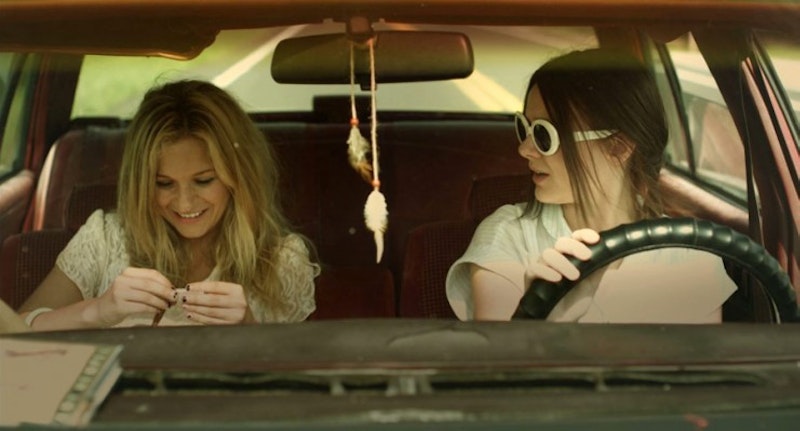 Adele (Vanessa Ray), on a Central Park first date with her dweeb boss Adam (Adam Driver), sits next to him on a picnic blanket; they’ve just shared a kiss he initiated by way of a facile “mouth-to-mouth demonstration” conceit deployed (probably) as a device to insulate both parties from the possibility of disappointment. “I don’t like you,” she murmurs, gazing out into the distance, and for what seems like an uncomfortable, impossibly long stretch of time, neither twentysomething says anything. Long enough to recognize that, more likely than not, the “you” Adele’s addressing is herself.

Released in 2012, Devyn Waitt’s directorial debut Not Waving, But Drowning is difficult to peg: never precious, occasionally impressionistic, glossy, vaguely fantastical. Though I described Waving to a friend as “a coming-of-age tale dolled in weird music videos,” it resembles Boyhood in how it scrimps on exposition, trusting that the audience is savvy enough to draw conclusions and make connections.

The movie opens with a 15-20 minute introduction that finds high-school Adele and a creepy male best friend named Big Guy whose mother just committed suicide—dude has issues—locked in a wary mating dance involving straight razors, sewing needles, and film-school quirk that’s difficult to watch. Then Waving shrugs that off as if it never happened, gear-shifting into a totally different. Suddenly Adele’s a few years older and way more irresponsible—maybe Big Guy’s YOLO spirit rubbed off on her—palling around with straight arrow Sarah (Megan Guinan).

The plan is that Sarah and Adele will blow off this nowhere town for New York City. Thanks to a hackneyed plot contrivance, Sarah stays put, while Adele takes on NYC. The narrative zig-zags back and forth between the two young women as several months pass. Sarah takes a job at a nursing home and befriends the arguably dopest spinster aunt ever, who smokes her up and unknowingly confers carpe diem life lessons; Adele discovers that chasing your dreams is, like, hard and that strangers won’t always have your best interests at heart.

Waitt, admiringly, refuses to hammer most of the plot points home, cruising through happenings that largely register as inevitabilities in retrospect.

Adele’s course is the more interesting and true-to-life of the two, and it’s heartbreaking to watch her compound poor choices—one or two of which lead nowhere, which a more conventional director might shove into comeuppance—until a self-awareness sets in. Mind you, self-awareness doesn’t equate to full maturity, and there’s a sense at the end that Adele has a ways to go until she truly understands herself, which, for some of us, takes decades. Really liking yourself can take far longer.

One evening last week I met my niece for coffee; she’s nearing the end of her medical assistants’ program, and when the internship aspect winds down, hopes to reinvent herself in a new, faraway place, en route to sorting out exactly who she wants to be when she grows up. She’s 19 now. Before she decamps, I’m going to talk her into watching Not Waving, But Drowning at least once.