Wes Anderson’s Grand Budapest Hotel is his most affecting and least kitschy. 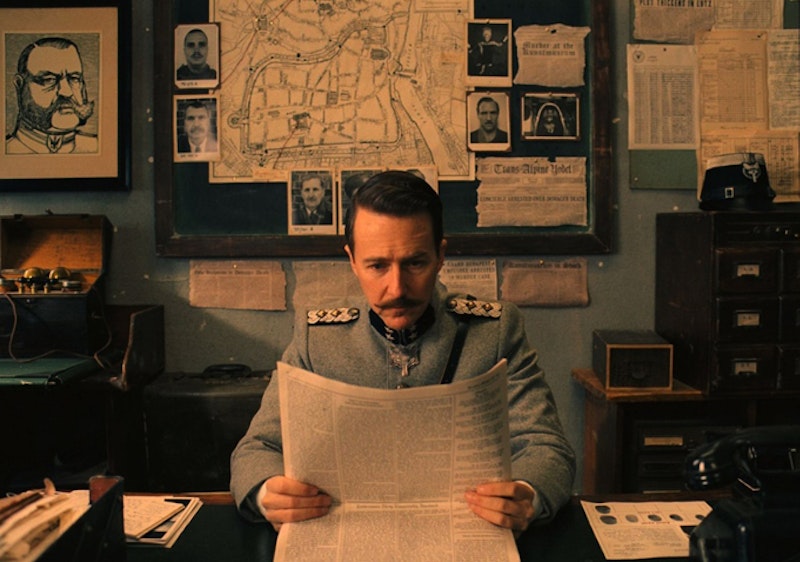 This is the most common complaint about Wes Anderson, how he never leaves the specific aesthetic he’s cultivated over his entire career. The Grand Budapest Hotel is a peaceful and assured film from an established filmmaker with nothing to lose or prove. Anderson has a very specific and easily parodied and mocked/belittled style. In another era, his movies would be way too “faggy” to receive widespread release and acclaim, but instead he’s pigeonholed as a quintessential “hipster” director. More like precious. The older Anderson gets, his films delve deeper into his crackling paint pachinko doll dream world of primary colors, precise movements, and picture book composition. Even though his last two have been live action, he still hasn’t left this world. Hence the tweet above. The Grand Budapest Hotel looked like another innocuous dip into Anderson-land, all strawberry shortcake, rainbow suits and a coy cuteness, a sly sexuality that Calvin Johnson of K Records has honed for decades now.

Surprisingly, The Grand Budapest Hotel is much more affecting than Moonrise Kingdom, which operated in a smaller scope and in a limited time frame: two kids on the cusp of puberty, ostensibly “not meant to be together,” escape and a whole town is dispatched to look for them. I liked it but I think we’ve had several dozen too many adolescent/early 20s romances in the past decade, and it’s limited: they get together or they don’t. The Grand Budapest Hotel is haunting and sad, far more so than realistic Anderson movies full of death and lost love: Rushmore, The Royal Tenenbaums, The Life Aquatic. This movie is a supremely affecting alloy of the creepy children’s storybook menace of Fantastic Mr. Fox (achieved through extensive use of miniatures instead of CGI) and live action. The scenes and characters are much less developed and more impressionistic than Moonrise Kingdom, and the result is Anderson’s most wistfully sad and aesthetically successful film.

The way the movie is framed is what makes it work. Not the aspect ratio, the girl reading a book in a park with a statue by the dead author who wrote about the now abandoned hotel in the 1960s, surreptitiously meeting the reclusive owner, and hearing his story as a young “lobby boy” for the melodramatic, insecure, charming but needy manager. The specifics hardly matter. The Grand Budapest Hotel is an epic portrait in miniature about the cycles of life, of calm beauty and an assuredness and quiet melancholy that is transcendent. The film moves very quickly and every shot is a meticulously constructed tableau of human life (the furious bakers, the townspeople in the square, the levels of this huge hotel that has the humility of the nine foot miniature it is, like a doll’s house) how long people and places linger after they’ve left, the phenomenon of life feeling unbearably long and cruelly short all at once. Some call Anderson’s work shallow, but there’s as much warmth and pure love in his dollhouses and Lewis Carroll dreamscapes, impressions of people, archetypes, into something that is elevated and transcendent, like the character sketches of The Beatles’ “Penny Lane.” Where Anderson’s other films often verged into cringing kitsch, The Grand Budapest Hotel is his most simple, wistful, melancholic, and majestic film yet. It has a peace about it of an artist far beyond his years.