Götz Spielman’s Revanche never quite goes where you expect it to, and the result is often staggering. (Grade: A) 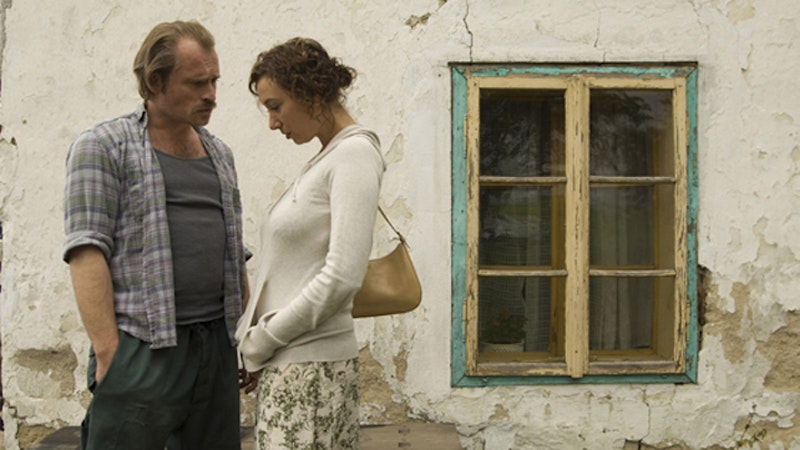 The Austrian heist film Revanche, finally out now after losing the Best Foreign Film Oscar in March, is such a dry study in crime that it makes No Country for Old Men feel like Get Shorty. Like that excellent Coen Brothers film, Götz Spielman’s new semi-noir tale keeps moving farther and farther away from its central incident, and its characters become nearly absorbed by the natural world as the story progresses. Spielman, a playwright who wrote and directed Revanche, perhaps fills his film with too many just-so dialectics and mirror images, but a handful of incredible performances, the script’s emotional poignancy, and its insistent pacing redeem any over-literariness.

Despite the French title and an opening conversation in Russian, you can almost tell that Revanche is Austrian from the credits alone. Cinematographer Martin Gschlacht gives Spielman’s film the same unmoving, unvarnished look that makes Michael Haneke’s Cache and Nicholas Geyrhalter’s Our Daily Bread so immediately engaging. But Revanche’s setup, unlike those films’, seems nearly clichéd; Alex (Johannes Krisch) is in love with Tamara (Irina Potapenko), an illegal Ukrainian stripper working at the brothel he helps manage. Sick of poverty and hungry for a change of scenery, Alex comes up with a plan to double-cross the club owner, rob a bank, and escape to Spain. Tamara follows along, a move that would make her seem stupid if Spielman didn’t establish the believable tenor of their relationship in the film’s touching opening scenes.

The age-old Gun Crazy/Bonnie and Clyde premise of Revanche is subtly reworked from the very beginning by Gschlacht’s unflinching, un-romanticized camerawork, but once the crime occurs, Spielman takes this setup into emotionally rich places that the Vienna-set beginning doesn’t even hint at. Needless to say, the bank robbery goes awry, and a well-meaning, sensitive city cop (Andreas Lust) is unwillingly implicated in Alex’s desperate act. I’m usually not one to care about spoilers, but the surefootedness with which Spielman reveals the subsequent plot points deserves respect, and besides, it’s more fun to follow his lead without prior knowledge of the proceedings.

More to the point, every plot development in Revanche moves us paradoxically farther away from the film we expect to see from Spielman’s familiar premise. Alex’s gun gets periodically taken out, and an ominous wood saw appears, but Revanche reveals itself to be more about emotional struggle than violent resolution. The film, like Haneke’s best ones, is more about the psychological aftermath of violence than the perpetration of it, but Spielman has a lighter touch with characters and emotion than Haneke, meaning that Revanche, despite its finely-calibrated writing, feels honest, not over-thought. There’s a variety of finely observed human behavior in this film, particularly in Alex’s relationship with his aged grandfather (Hannes Thanheiser) and his later encounters with the policeman’s wife (Ursula Strauss), and the filmmakers’ technical accomplishments are often just as affecting. There’s a long shot of a character throwing a handgun into a lake near the film’s end, and the sudden breeze that ripples the water’s surface, covering the last traces of the weapon’s landing, reveals emotional depths that the character’s unseen face isn’t able to supply. It’s not unlike Conrad Hall’s use of rain and shadow in In Cold Blood—nature cries the tears that the characters and filmmakers don’t want to reveal outright. It’s a gorgeous cinematic moment.

Early in Revanche, Alex’s grandfather says of him, “In the city, you end up arrogant or a scoundrel. He ended up a scoundrel,” thus establishing one of the various dichotomies that weave through the film. The constant juxtapositions—city vs. country; prostitution vs. adultery; murder vs. natural death; crime vs. hard labor—bring Revanche perilously close to feeling, a la Doubt, like the too-clever product of a playwright. But these mirrored images are never played for cleverness—thank the understated cinematography for that—and instead add resonance to Spielman’s themes. Grief runs through all people, from the urban underbelly to the cordoned-off rural professional types, and no one is immune from cruel tricks of chance or sexual/emotional desperation.

Which all makes Revanche seem more painful to watch than it is. There are few laughs, sure, but the thrill of watching such excellent material performed and produced so well is a pleasure in itself; it has the thematic tautness of good theater and the visual spaciousness of great cinema. Spielman has managed to bring us on a harrowing tour of post-traumatic emotions that could be hard to watch, but the whole thing is so affecting and beautiful that it’s even harder to look away.