The Most Underappreciated Film of the Year

Killing Them Softly is a taut, horrifying look at crime. 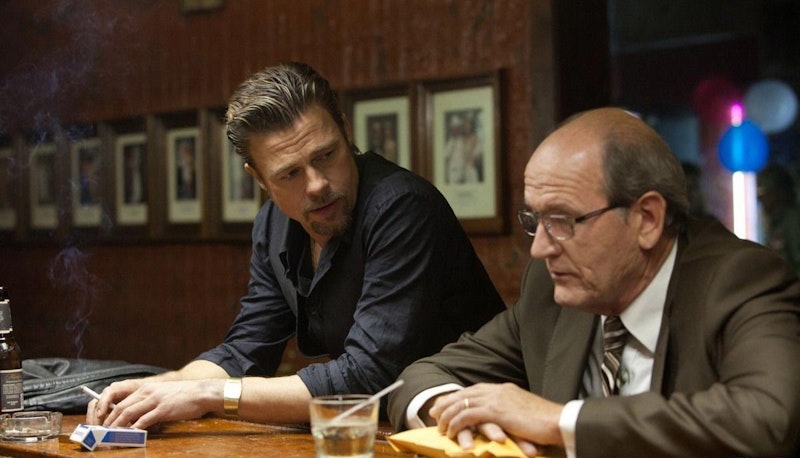 There’s one scene in Andrew Dominik’s Killing Them Softly that momentarily defangs an otherwise sharp movie: mouth-breathing wannabe gangsters played by Vincent Curatola and Scoot McNairy hang out in a shooting gallery, nodding out to the first 40 seconds of the Velvet Underground’s “Heroin.” Cue tons of soft focus shots, warm sepia lighting, and some eyes rolling in the back of heads for maximum nausea. You may as well have had them look wistfully to the left as Green Day’s “Good Riddance (Time of Your Life)” pumped through the optical soundtrack. Contrast that with the opening sequence, the very beginning of the movie immediately after production company title cards: a harsh, shrill noise cuts in over black as if the projectionist missed his cue; smash cut to a rainy, grimy industrial tableau; another smash cut to more title cards and a noisy whine; we go back and forth between these more and more rapidly as the title is revealed piecemeal through these disorienting cuts. It’s the coolest stylistic set-up in a major Hollywood movie this year, and the film’s tone remains spot-on for most of its 97 minutes.

Killing Them Softly is actively trying to be more than a bland crime movie. Throughout, radio and television broadcasts around the 2008 financial collapse are played prominently in cars, bars, houses, hotels, even the crooked card room that Curatola and McNairy naively rob early on. Bush, Obama, and McCain talk about the fundamentals of our economy remaining strong as McNairy cleans out the pockets of some Russian thug, and during silent car rides, as if the empty space needed to be filled with something so obvious. We get stabbed with the point in the final scene, where Brad Pitt’s assassin, after disposing of the two amateurs and finding he was paid $15,000 less than what he expected, announces that “America isn’t a country, it’s a business. Now fucking pay me.” Smash cut to black and Dominik’s precious credit “Written for the screen and directed by…” There are high ambitions here, but the economic stuff comes off flat and underdeveloped. The movie is lean; not enough time for big themes to develop while you have criss-crossing characters and details to deal with. The movie’s biggest success is its commanding atmosphere and aura of cool, set effortlessly from the very first frames.

Killing Them Softly bombed this past weekend, making only $7 million and disappointing everyone involved. Audiences hated it, apparently expecting something else entirely, which doesn’t make a whole lot of sense to me. Judging solely from the movie’s poster, the tone you’d expect is pretty much on the money—there’s a lot of talking in cars and bars, but it’s evened out by the truly grisly beat down of Ray Liotta, who’s assaulted in a disturbing gore-porn way early on. If you go expecting a crime movie you’ll get it. But perhaps people were just turned off by the film feeling itself out outside those staid boundaries—even if the economic motif is delivered ham-fisted, it’s never boring, and a very nice change-up for a genre that is often like watching paint dry.