Quite Possibly the Worst Film Ever Made

What follows is not a review, it's a warning. 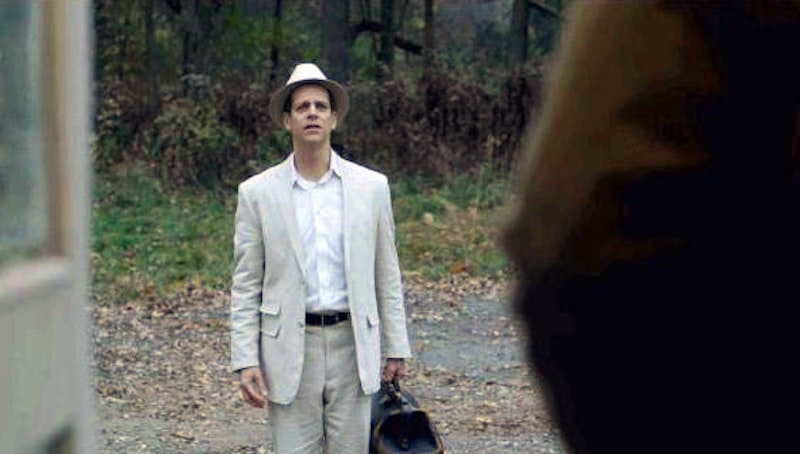 The Bleeding House, the debut from filmmaker Philip Gelatt, has all the nuance of a bad porno (without the pleasure of any actual on-screen fucking). It's a horror film that can't compete with some of its more successful indie counterparts of the past few years; it's not nearly bloody enough to be a slasher gore-fest, and its pop psychology is on par with a bad episode of CSI. It spends an hour and a half rolling around in the muck of its own endless clichés, and leaves its audience with only one question: Why the hell did I just watch that?

Here we have the Smiths, an all-American family with a dark past. The film opens with flashbacks to a burning house and intercuts with scenes of a family murdered in the night and we know they've recently moved out to the country to avoid small town incriminations. Their teenage daughter (Gloria, but she prefers "Blackbird") hardly ever says anything intelligible; she pins insects to her bedroom wall and snaps the neck of a pet bird after her mother insists she let it go. She is, in short, a wacko, and though Gelatt does his best to keep the suspense up it's obvious from about minute six what's going on here. Gloria did something awful, and now the whole family will pay for her sins.

One evening Nick shows up, a charming Southern preacher who's complaining of car trouble and in desperate need of a little kindness. Nick's only luggage is a medical bag; he wears an all-white suit and talks like a bad Tennessee Williams character (at least he does when actor Patrick Breen can keep up his accent). The Smith family, of course, lets him spend the night, instead of, say, driving him into town, because if they don't let him spend the night there's really no way to move this plot along, now is there? Turns out Nick is a little more homicidal than he first appeared, and proceeds to kill the Smith family one by one. Drugging the husband and wife and then draining them of their blood (spoiler: Nick's family was killed the same way, and his grief ended when he too turned to ritual murder), cutting the son's throat, and attempting to enlist Gloria as some kind of partner/protégé. At one point some bumbling cops show up, only to be quickly killed off, and at the end everyone is dead except Gloria, who's left to walk down a moonlit back-road to God knows where. End. Credits.

Movies this bad are supposed to be fun, but Gelatt takes his schlock too seriously. There's nothing campy about The Bleeding House; no sense that you're watching it for the mere ridiculous factor (e.g. Dead Snow with its Nazi zombies). It's just thoroughly awful.