The Most Morally Bold Movie in Years

The Act of Killing will make you gasp. 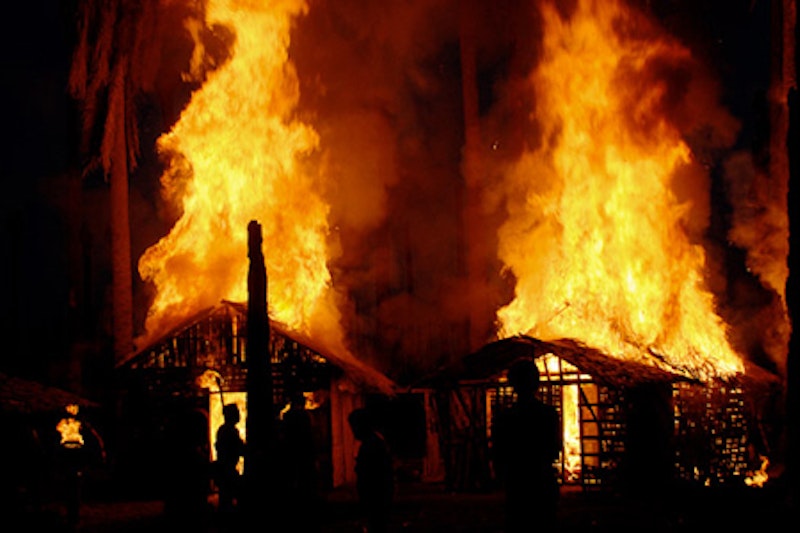 Josh Oppenheimer’s The Act of Killing is a masterpiece, but so far, its distribution has been frustratingly limited. Here in Baltimore there were only two showings at the Charles: 11:30 in the morning on Saturday, and Monday night at 7:00. It's required viewing for the human race. In 1965, a military coup in Indonesia led to the indiscriminate slaughter of activists, intellectuals, homosexuals, ethnic Chinese, anyone against the regime—whoever was suspected of a being a “communist” was tortured and killed. Anwar Congo and Adi Zulkadry were two of the gangsters subsidized to exterminate thousands of innocent people, and to this day, they are feared and revered as national heroes in Indonesia, which hasn’t had a regime change.

They were obsessed with movies as young men—Marlon Brando, Cary Grant, Clint Eastwood, Gene Kelly—so director Oppenheimer invites Congo, Zulkadry and his friends to re-enact the scenes of their killings, showing us their cleanest and fastest means (a wire wrapped around the neck, pulled taut by a piece of wood) in a comically laid back, vaudeville style, dressed in flamboyant clothes, some in drag, mimicking the gangsters they saw in movies in the 50s and 60s, the musicals. They’re surrounded by men, women, and children who’ve either been brainwashed, keep their reservations to themselves, or openly laud and boast about the incalculable crimes of these men, like the Pemuda Pancasila, a right-wing paramilitary organization filled with young men ready to kill. For what?

As if anyone needs another Eggers or Kony-style show piece from narcissistic benevolent white men. Oppenheimer’s film is brilliant because it doesn’t recount or narrate in full what led to the coup, the indiscriminate slaughter—there’s no sappy strings, no tearful talking heads. The Act of Killing mostly shows the everyday lives of these men, shooting the shit, playing games, dress-up, vacillating between believing what they did was just and feeling the evil sink in. We don’t hear anyone’s life story through B-roll and narration. We don’t need to. Oppenheimer and his crew study faces, body language, gestures, and the way people tense up and become more alert when Congo and Zulkadry walk in a room. Congo is disturbingly charismatic, a quiet man with small eyes who holds court wherever he goes, with the fashion sense of a pimp on PCP. He moves deliberately, gliding through town collecting money from businessmen, playing with children, dancing and singing. The bulk of the movie shows monotonous, daily routine behavior, which can feel tedious in the middle, but the power is in how unsure of himself Congo is, how haunted and stoic he seems surrounded by people who worship him out of fear.

Oppenheimer stages a mock execution for Congo, blindfolding him and tying him to a chair, with the wire wrapped around his neck. His friends mock “torture” him, but none of them ever really subject themselves to anything worse than horsing around. When Congo is choked, he remains tough but seems deeply affected, hanging his head, saying nothing, as if the thousands of people he snuffed out were rushing at him all at once, like the decapitated man whose wide white eyes he forgot to close that continue to haunt him. Congo says he now understands what his victims feel like—and when Oppenheimer rebukes, saying it wasn’t even close, you were acting, these people were being tortured and knew they would soon be dead, he doesn’t say a word. Later, on the rooftop where he strangled so many, Congo begins coughing, hacking, gurgling almost, with what sounds like the most obstinate mucus glob in history stuck to his lungs like tar, and he gags uncontrollably, leaning over to spit, and even though it sounds like his chest is about to give birth, almost nothing comes out. It’s the most horrible sound, you imagine his victims making these sounds as he watched them die.

The Act of Killing has no overblown sentimentality or gratuitous revelry in violence. It’s as much about the human face and how it relates to your interior behavior as the coup of 1965, how these men can sleep at night, how a whole country bows at their feet for something with no justification. Congo is jarringly charismatic, and since we only see him now, as an impeccably dressed, haunted patriarch, we feel an astounding amount of sympathy for him, a mass murderer. People are more annoyed by Ben Stiller than Anwar Congo. The Act of Killing is a landmark documentary: surreal, moving and deeply disturbing. It’ll get the awards buzz it deserves, and maybe a proper re-release, but this is the most morally true and bold movie I’ve seen in years.