This doofus contributes to one of the worst movies of the year. 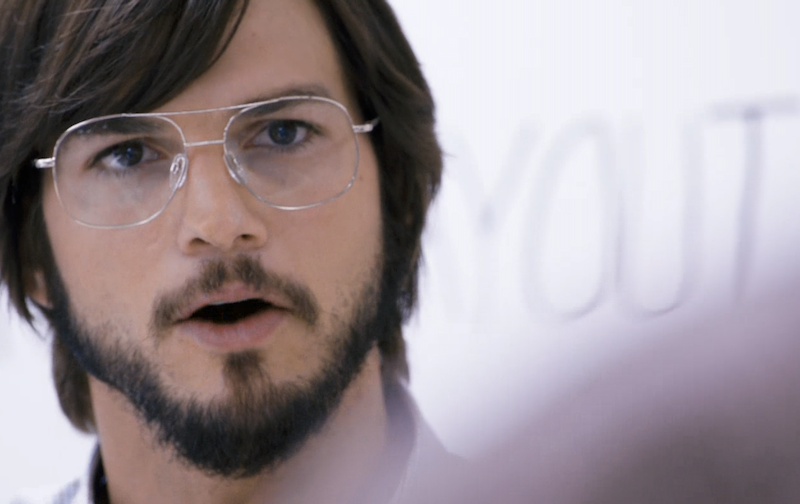 Ashton Kutcher is a national treasure. He’s indispensable—as doofus emeritus on That 70’s Show and the watershed Dude, Where’s My Car?, to me, the defining movie of the 00’s: an aimless, oblivious, horny, cartoonish stoner wandering through a dunce’s playground world. Kutcher’s Jesse and Seann William Scott’s Chester waddle around playing with suicide cults, homoerotic male bonding, balloon-titted twins and aliens, and Fabio. It rolls around gleefully in the manure it knows it is, and embraces the idiocy and wildly ridiculous reality of a Warner Brothers cartoon (like when Jesse and Chester’s irate pizzeria boss comes ranting and raving to their house, and they hide the pizzas they stole by throwing them up to stick on the ceiling). There’s nothing like the feeling of laughing so hard at something so ridiculously stupid or tossed off that you become an infant, mumbling and choking between sustained belly laughs, complete gibberish, lolling about in wonderfully inane ecstasy.

Steve Jobs is Kutcher’s first “serious” leading role and boy does he fuck it up, but marvelously. As Emma Brockes of The Guardian writes: “his manner on stage and in his media appearances of late has been of a man who has seen the meaning of life and doesn't know if the rest of us can take it. (For which also see: James Franco).” This is unfair to Franco, who seems to have genuine interest in things other than straight-up acting, but this is “not what actors are supposed to do,” so he’s used as the butt of easy jokes that say something about peoples’ jealousy/suspicion of intellectuals and perceived fakers. Kutcher is, who knew it, a “shrewd investor,” with money rolling in from a bunch of startups that probably all end in “bly,” he’s probably not losing any sleep over being type-casted and passed over in the last decade.

But with Jobs, he’s got something to prove, a message you can believe in, for the kids, like in that diabetic Teen Choice Award speech: Maximize your life. Kutcher’s performance and the cornmeal script makes Jobs look like the most insufferable asshole, practically mentally ill. We all know Jobs’ morbid narcissism, obsessions, and willful emotional and professional sabotage were demented. That’s not what makes Jobs an unintentional gem: nothing has changed about Kutcher’s “straight face” (impossible not to laugh at, in any context or role) since 2000, and the comically shitty script (one rando exec towards the end: “Apple’s like a ship with the hole in the bottom, and it’s leaking water!”) recalls Dude, Where’s My Car? and the excellent “emo phase” Kutcher of The Butterfly Effect.

But this is supposed to be a movie about Steve Jobs, a man with one of the most ubiquitous and substantial legacies in human history: complex, and more powerful than almost everyone. Yet for some reason, Jobs loiters around Apple’s earliest days with perfunctory attention given to the iPod and the first iMacs, but absolutely nothing about the iPhone or iTunes. Who cares if he took acid and had a revelation or something, sounds like a pretty common Boomer experience. It’s the second act that’s fascinating, becoming the king of music and technology, and dying relatively young, becoming an instant legend—his being a prick is overlooked if not redeemed. None of this is tackled in Jobs, a gleefully inane train wreck like Knowing, The Wicker Man remake, The Happening, or Kung Pow! Even though he’s playing Steve Jobs, Kutcher sounds like Kelso when he’s mad, always, and as scenes begin to cycle and repeat, like some baffled executive saying, “Well, what do we do now?” or “She’s not my daughter!,” it gets funnier and funnier, imagining Jobs himself writhing or spinning or gliding around somewhere, not quite heaven or hell, where he just can’t fucking stand the ugly fucking font they used on his dedication card—“should’ve been Myriad Pro.”