The Movie Trailer That Loved Authority

Barack Obama has something fun to tell you about spies. 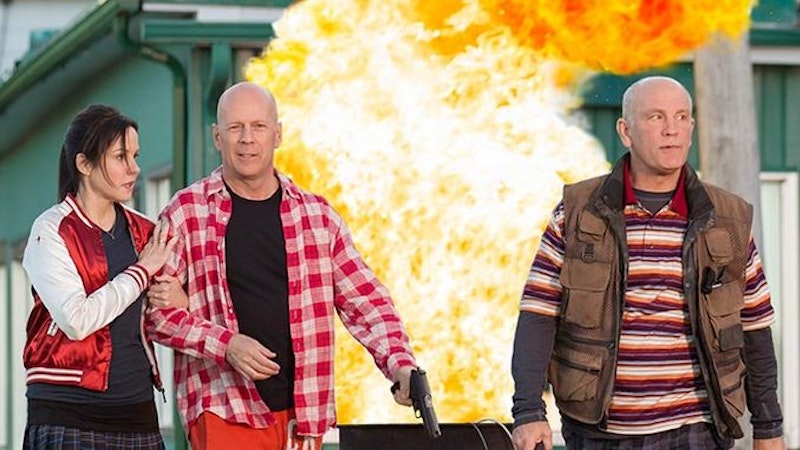 Let's start with this unedited comment from a YouTube thread. Like many angry thoughts posted on the Internet, it sounds like something you'd hear Donald Duck saying if he'd slow down a bit and get his consonants right. By which I mean that it's so splenetic you want to pat him on the head and then wipe the spit off your sleeve. But there's a catch, and see if you can spot it: “fuckin pathetic… our constitution that our forefathers fought and died foris [sic] being destroyed by our government and you think it makes a good commercial for a movie?!”

Yes, you got it. The catch is that he's right. Of course, the other catch is that I don't care nearly as much as I should. I bet most people are the same way. It's too bad.

The guy's angry over the trailer for a caper film that came out this summer. The movie, Reds 2, is about Bruce Willis and other government agents who get things done in a madcap, tires-squealing way, with crashes and mishaps. The trailer, which is very clever, intercuts the mishaps and crashes with footage of a press conference where President Obama tries to reassure us, the public, that the NSA is not going to go on a wild ride through our private info. They're professionals who know what they're doing, and have rules to follow. Meanwhile, there's the merry chaos with Willis and the other free spirits as they save our asses from something (a “missing portable nuclear device,” Rotten Tomatoes says).

As it happens, the nutty agents in the film aren't doing any of the things alleged against the NSA. “Nobody is listening in to your telephone calls,” Obama says, and there's Bruce Willis saying “Yeah” into what looks like a sneaker phone. If you're saying “Yeah” into a phone, you're not listening in, you're talking. The match-up between NSA snooping and the Reds 2 movie madness comes down to this: both parties are violating some sort of rule (with the NSA, that would be the presumption of privacy), they're doing it to keep us safe (allegedly) and they were or are doing it in secret.

Add all that up, and what the clip implies is that the NSA snooping really isn't our business. Yes, the clip presents Obama as a lying frontman for government shenanigans. But the shenanigans in question are saving the world. It's understood in Hollywood films that the big jobs get done by lively screw-ups and hard-bitten mavericks, by people who tell the rules to get stuffed. The mess generated along the way has to be covered up, so a man in a suit tells the voting public there's nothing to see. Maybe the public falls for it, but that's their problem; we, the audience, know better.

The movies' nothing-to-see-here moment has become a minor tradition over the past few decades. It's a joke; part of the raffishness Hollywood has developed about life under our secret government. In The Rock, released a decade and a half ago, Nicolas Cage waggishly asks the top-secret operatives if they can let him in on who killed Kennedy. The joke is that, yeah, they know, and that Cage knows they're not going to tell him. Obama won't tell us what Willis and Helen Mirren are up to. Maybe he isn't telling us what the NSA is up to. So what? They're all saving the world, and we should keep quiet and be entertained.