The Women is being misunderstood as some kind of feminist tract, as if there was room for only one definition of womanhood in the world. 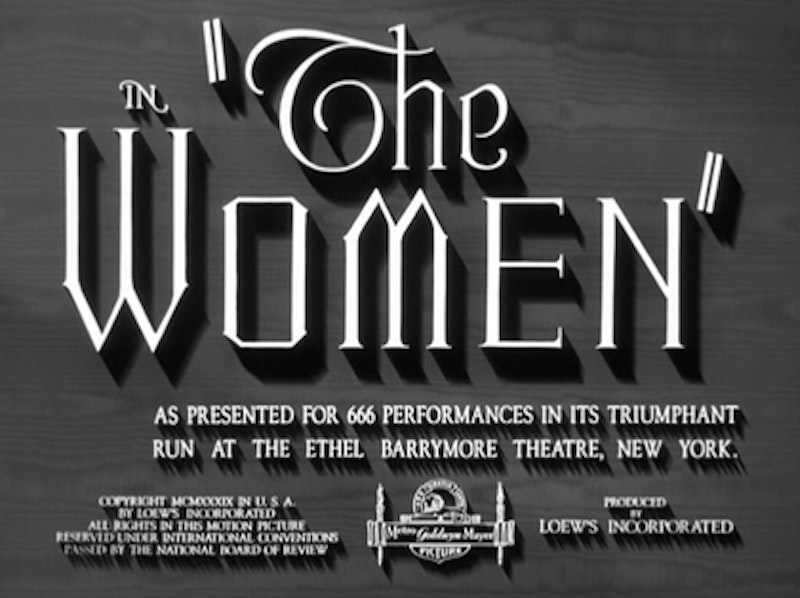 The Women (1939) starts by introducing its characters with a picture of the animal each represents. A fawn as Mary, the everywoman; a cat for Sylvia the gossip; a tiger for Crystal the mistress, etc. That's right, women as animals. Feminists unite in rage!

The Women (2008) starts with a montage of shoes walking on the New York city streets, stilettos, flats and clogs—mostly stilettos, in flashy styles—the whole thing very "Lipstick Jungle," very Sex and the City, very Nine to Five, now such a cliché. But that's right, women as shoes. Feminists unite in rage!

Like every movie with a female in it, there's much for feminists to attack about the new version of The Women, out this week. It's hard to be a staunch feminist these days. The word is dirtier than "liberal," even though Sarah Palin has Republicans blurting it out like they have Tourette's and a lifelong addiction to amphetamines. Feminists have a lot to gripe about. They (we) always have. But it's an increasingly challenging position to hold. Most feminists would watch The Women—old and new—and cringe, writhe and twitch their way through the entire male-gazing bitchfest. That is, if they even see it all. I did, this weekend, and it was all right. I liked the shoes!

It's hard to be a feminist because, well, no one really knows what a woman should be. Talking down to housewifery hasn't been all too successful. Recent reports of women with Harvard degrees becoming stay-at-home moms have feminist professors running in circles, panties in a bunch. And several books have come out making very rational arguments as to why a woman—particularly middle class women—might actually forsake a career for life on the sofa. Yet some women do manage careers and balance children and marriage well, like my mom, and still some do it poorly and need government help. Yet even working moms want men, or other women, talk about their relationships endlessly.

Ah! So many damn choices! Which one is the right one? No wonder The Women '08 feels all over the place. George Cukor's 1939 classic benefitted from a sharp, misogynistic focus: all women want men and nothing else. The tagline for the movie makes it plain: "It's all about men!" (Gloria Steinem just slit her wrists). We have these women figured out before they open their mouths. Only two characters have even a hint of a career—Nancy, an old maid and likely lesbian who writes novels, and Sylvia, who writes a column—and we never really hear about those jobs. Instead gossip is their trade and men are their product, a product the audience never sees but is highly valuable. If the 1939 version did anything for feminism it objectified men by cutting them out of the movie. Castrating them, if you will.

The new Women cuts out men as well. They are nowhere to be seen, and to its credit, the new one builds on the old plot, adding some penis-less dialogue here and there. We actually get to know about some of their careers and aspirations, even if they are the-all-too obvious "magazine editor" and "fashion designer.” But the bar wasn't high for Diane English's new flick. The old Women showed female in a terribly male-dependent light, with aneurysm-inducing lines like "Pride...is more than a married woman can afford," said by the main character after she goes running back to her husband, literally dashing to the camera! In 1939, marriage was success, divorce failure and a career a non-issue or meaningless luxury.

What to do with all this history and baggage? How do we makes sense of Sex and the City, Devil Wears Prada, The Women and all the other recent movies where women want men, kids, careers, marriages, designer shoes, luxury bags and respect for all those choices?

The new Women has an answer to all the feminists: "I don't want to have it all. I just want a piece of it all." Having it all takes too much work, Mary Haines (Meg Ryan) says. Well, this isn't new. This has been the conventional wisdom for about 30 years. In 1987's Baby Boom, Diane Keaton plays the traditional high-powered businessperson with kids who can't seem to have it all. Until, in the end, she finds a way to make it work for her: no world domination, no housewifery, something in-between.

In the real world, women make these compromises all the time. So do men, though their choices aren't framed as compromises. Critics, feminists and everyone else hate on movies like The Women because they assume these movies are telling women how to live and belittling them in the process. I think Diane English would probably say to the men, feminists and everyone else: leave us alone!

No wonder the title song for the movie is Duffy's "Mercy": "I'm begging you for mercy! Why won't you release me? I said you better release me!""