The Joke is on the Roses

Schitt’s Creek is one slice of a much broader cultural obsession with lifestyles of the rich and famous. 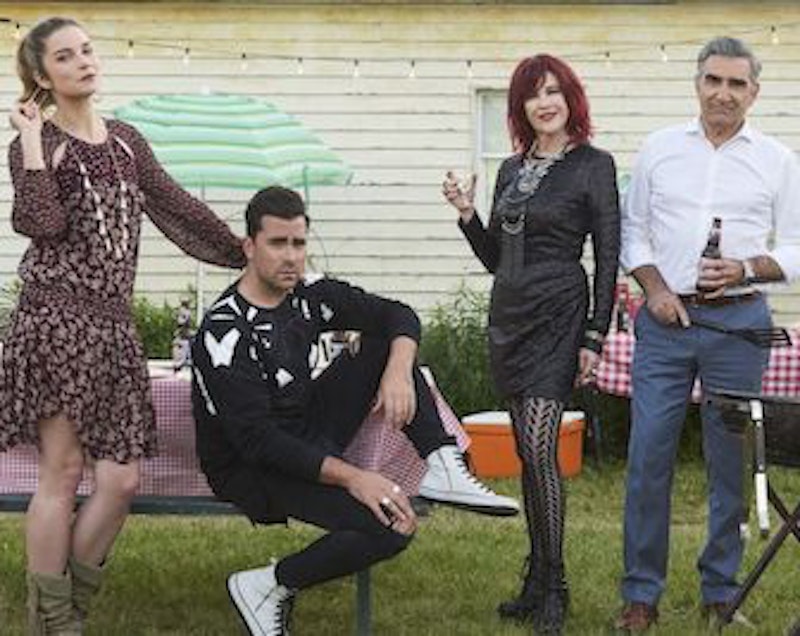 Everybody’s done it: there’s a show on Netflix that everyone’s going on about and you’ve managed to dodge it but now it’s a lazy Sunday afternoon and you’re hungover and cuddling with your new boo thang and ugh you can’t be bothered to leave the bed, let alone enter society, so you cave and order takeout and camp in all day powering through episode after episode on cruise control. This was me over the holidays with the spectacular Eugene Levy and Catherine O’Hara led comedy Schitt’s Creek, if you replace “boo thang” with 5000 bottles of wine and the tears of loneliness.

For weeks Netflix has flaunted the show at me based on my viewing history and I’m glad I finally caved because I haven’t enjoyed a scripted comedy in so long. Ever since 30 Rock ended everything else seems totally lame sauce. Even Kimmy Schmidt was unfunny, with a good joke or two here and there.

If you loved 30 Rock, you must watch Schitt’s Creek. The premise of the show is painfully familiar: it follows the very wealthy Rose family who suddenly lose all their cointatas and are forced to move to a town called Schitt’s Creek that rich white dad Johnny Rose (Eugene Levy) purchased as a joke for his son David Rose (Dan Levy) years ago. A sleazy motel in Schitt’s Creek is now the only place the Rose family can afford to live. The comedy comes from this group of formerly wealthy people trying to rebuild, navigate and grasp their new life in a town so outside their normal habitat. On paper this all sounds very boo hoo, poor rich white people who have to live as average citizens now! And it’s definitely very that. But Schitt’s Creek is also really flipping funny, with impeccable comedic timing across the board, that kind of absurdist, social-groups-making-fun-of-each-other, fast-paced comedy you’ll miss if you’re not listening/watching closely. Even the subtle gestures are funny.

Moira Rose, a former soap star desperate for relevance and eccentric socialite played brilliantly by Catherine O’Hara, will remind you of Jenna Maroney from 30 Rock, and she’s by far the best thing on the show, loveable because of her absurdity. She wears absolutely ridiculous clothes at all times. She’s obsessed with ostentatious wigs and has a new one on in every scene; its own running gag. She speaks in a crazy accent, kind of pretend British, kind of part socialite, and she uses really strange words like “confabulate” that nobody ever says aloud. Confabulate! In some ways Moira Rose is the one with the most at stake in the Schitt’s Creek narrative because she comes from a place not unlike it, and did what she could to get away.

The show’s relatable to folks from modest backgrounds who somehow made it “out,” if getting “out” is desirable and the goal. You know that the further you get from your upbringing, the more likely it is people will make fun of you when you go home ‘cause you think you bougie now. I’m thinking about that Prince meme I kept seeing over the holidays, the one where he’s in big sunglasses, a purple vest and wielding a scepter, and the caption is something like, “When you go home for the holidays and think u fancy now.”

Hilarious, emotionally rich and full of heart, Schitt’s Creek is one slice of a much broader cultural obsession with lifestyles of the rich and famous, where we get a glimpse into how the other half lives and drool about living large and in charge/what it’d be like to make dinner on a $60,000 La Cornue stove. Does anybody need that much stove? That or and rags-to-riches or riches-to-rags narratives where a family loses it all and has to “rough it” like the rest of us. But Schitt’s Creek is about much more than its premise. It’s also about loyalty, family, and even pansexuality. David Rose, a former art queen who’d be very annoying and possibly odious in real life, starts sleeping with his best girlfriend Stevie, the deadpan, sarcastic manager of the motel where the Rose family lives. But later, and without knowing, they both start sleeping with the same brick-hot furniture maker who tries to create a throuple out of the situation.

As I tore through episode after episode of Schitt’s Creek, I realized how much the show reminds me of The Simple Life, that early 2000s cult reality show about Paris Hilton and Nicole Richie living as rural Americans. The Simple Life show poked fun at Paris and Nicole for not knowing how to do basic stuff that everybody knows how to do, but unfortunately it also poked fun at and made a zoo of the locals. Super not cool! Schitt’s Creek makes sure that everybody makes fun of everybody, and more often than not, the joke is on the Roses.