On the Basis of Biopics 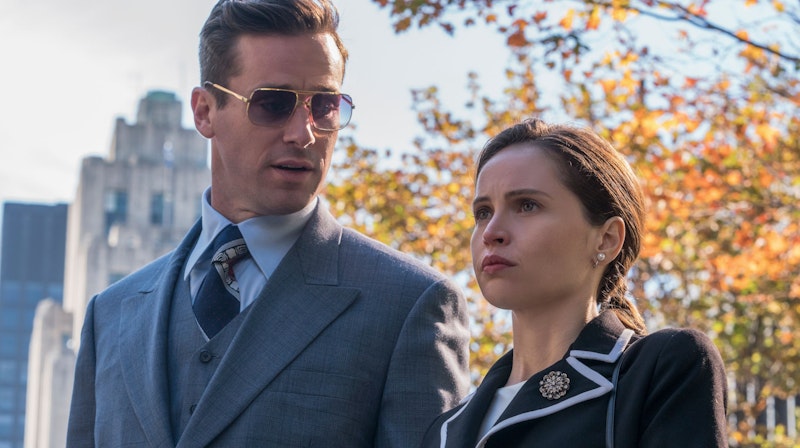 You’d be forgiven for thinking Supreme Court Justice Ruth Bader Ginsburg died recently—the past year has seen an explosion of memes and hero worship for the Judge, in her mid-80s and currently fighting cancer, along with a remarkably successful documentary simply titled RBG. After Hillary Clinton lost in 2016, all the prepared hagiography for her went out the window as she roamed the woods and put out feelers for a third run in 2020, which thankfully hasn’t gotten past the “thinking out loud” stage. Accomplished and esteemed women at the height of power in the United States are few and far between, and Ginsburg is one of the only “trailblazers” left. Hence On the Basis of Sex, a new biopic about the judge’s education and early career.

Starring Felicity Jones as Ginsburg and Armie Hammer as her husband Martin, On the Basis of Sex is an anodyne message movie meant for the January-February dump, fodder and filling while most people are still catching up on prestige pictures that may or may not have made it to their cities, or any screens at all yet. It’s a serviceable movie, if a little slow, and ultimately too bogged down in legalese to convey its purpose with clarity: the long history of legal discrimination against women and minorities, a patriarchy chipped away at and amended every generation or so.

Most of On the Basis of Sex takes place in the 1970s, after Ginsburg has completed her education at Harvard and Columbia (she rubs this in to her old chauvinistic professor, played with relish by Sam Waterston, cast against type as a total asshole—he hasn’t been this much of a bastard since Heaven’s Gate). She’s got a counterculture teenage daughter, a dedicated partner and equal in her husband, and, as we all know, enough to outwit a bench of dusty old white men to budge from their patriarchal perches.

So why wasn’t On the Basis of Sex released in 2018? It doesn’t have the production values of a TV movie, and has the tenor of something like Hidden Figures, which collected a few nominations in 2017. It came out on Christmas in “select cities” (in other words, one or two theaters in New York and LA), but this movie has been obscured by the more grassroots success of RBG, which has a decent shot at winning the Best Documentary Oscar.

As Ginsburg misses court, and undergoes multiple surgeries, people are already planning funeral arrangements. Cultural artifacts like On the Basis of Sex are exactly that: a script bogged down in details expecting it can ride entirely on the fumes of Ginsburg’s sudden status as the most important woman in America. To paraphrase Jones at one point in the movie, just swap out a few pronouns and proper names, and this movie could’ve been about anyone, any case, any situation where powerful men where trying to keep others down to prop themselves up. But as Morgan Jerkins wrote yesterday for The Washington Post, “Gloria Steinem calls Supreme Court Justice Ruth Bader Ginsburg ‘a superhero.’ The label could not be more appropriate—or more stifling.” Jerkins, in an article headlined “Obsessing over Ruth Bader Ginsburg’s health is bad for her, bad for us and bad for democracy,” warns against deifying a woman who probably won’t last another five years, and to face the very real possibility of a stacked conservative Supreme Court before Trump leaves office in a couple of—or several—years.

Unbelievably, Ginsburg appears in a cameo at the very end of On the Basis of Sex, walking up the steps to her workplace, her face pinched and skeptical as always. I know people want heroes, but it ain’t time to hang your hat on an 85-year-old woman with cancer. Drink some more wine, take a Xanax, and consider someone 60 years younger, like AOC. Or is that acronym still too scary to face? Ginsburg’s legacy is already in amber, why spend time daydreaming and praying for her recovery when we have this century’s radicals poised and ready to go? On the Basis of Sex shows a disturbing quality of the centrist-liberal set: nodding toward progress, but wincing always at the future. It won’t just be female, it’ll be a lot more than that—maybe more than wine moms and Hillary stans can handle.