With, of course, Matt Damon. 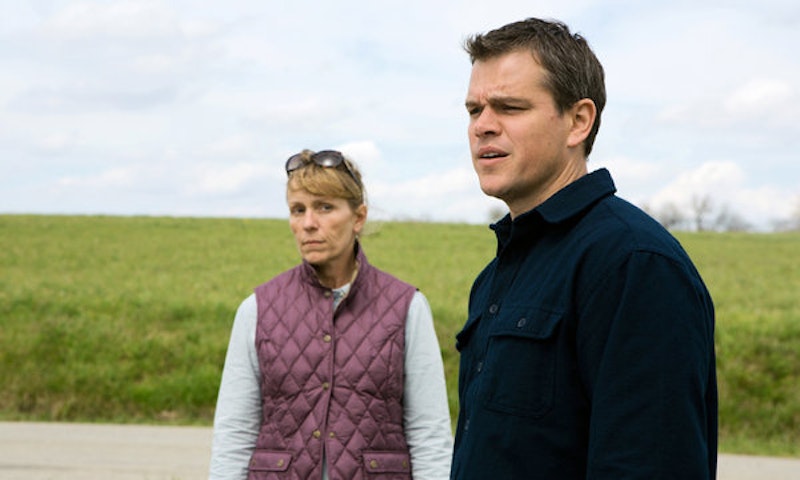 Who wants to see a movie about fracking? A documentary, yes: this is exactly the sort of serious, dire, and severely time-sensitive issue that demands a zeitgeist film like An Inconvenient Truth or Bowling for Columbine or even Waiting for Superman, not that those movies exactly made huge inroads in solving climate change, gun violence, or our decrepit public education system. But, this—that is, Gus Van Sant’s latest commercial project Promised Land—a totally anodyne, ineffectual, and often silly vehicle for Matt Damon and John Krasinski (the stars & screenwriters) to play villains and try to convince a dim small town residents that drilling and fracking on their land will give them a huge windfall and certainly not cancer or dead land or any of that nonsense. Admittedly, it’s an admirable ambition, to make the first major feature about fracking, but the message that this is a bad, bad thing that will undoubtedly kill lots of people and devastate our land is muddled through fluffy side stories, romantic interests barely pursued, an absurd twist ending, and worst of all, the stars of the movie, who honestly think appearing as guilt-ridden oil conglomerate executives would actually be more effective than spelling it out clearly in a doc.

Matt Damon plays Matt Damon as Fracking Executive. John Krasinski plays John Krasinski as an Environmental Activist who’s actually a Fracking Executive with the same company. Damon bribes him, he takes it, makes signs with pictures of dead cows and posts them all over town, then ultimately it was all part of the plan to get the town to vote for fracking? What? Damon reveals the whole charade at a town hall meeting and gets fired because he feels guilty. Great, the fracking executive throws his career away because Mrs. Thompson doesn’t know what she’s getting paid to do. It’s pandering crap, and if these guys were really interested in combatting fracking with a movie, they should’ve made a comprehensive and straightforward doc like Eugene Jarecki’s excellent The House I Live In. But they needed to be in it, to be in a crummy Hollywood template that’s poorly filled in and scattered with loose ends, paper thin characterization, and dripping with moral smarm.

The best thing about the movie is Gus Van Sant’s and his cinematographer’s aesthetic: muted colors, elegant tracking shots, classy work that elevates Promised Land from dust-bin obscurity into simply a weird failure. Who’s to say how serious Damon and Krasinski were about making the Great Anti-Fracking Movie. Maybe they really thought this was the way to go, two mega-rich superstar actors on a lark in a small town, cluelessly trying to convince everyone to let them drill on their land. Doesn’t matter either way, they’ll go back to their comfortable, safe, basically stress-free lives, insofar as getting sick or losing their livelihoods. What else is there to say? This was a hugely wasted opportunity, especially in relief to the masterful drug war doc The House I Live In I saw only a few weeks prior to this one. There’s no reason Damon and Krasinski couldn’t have narrated a Van Sant doc.