The Good, the Bad, and the Poorly Plotted

Cowboys and Aliens purports to be a genre mash up, but hollow action tropes hold it back from reaching its absurd potential. 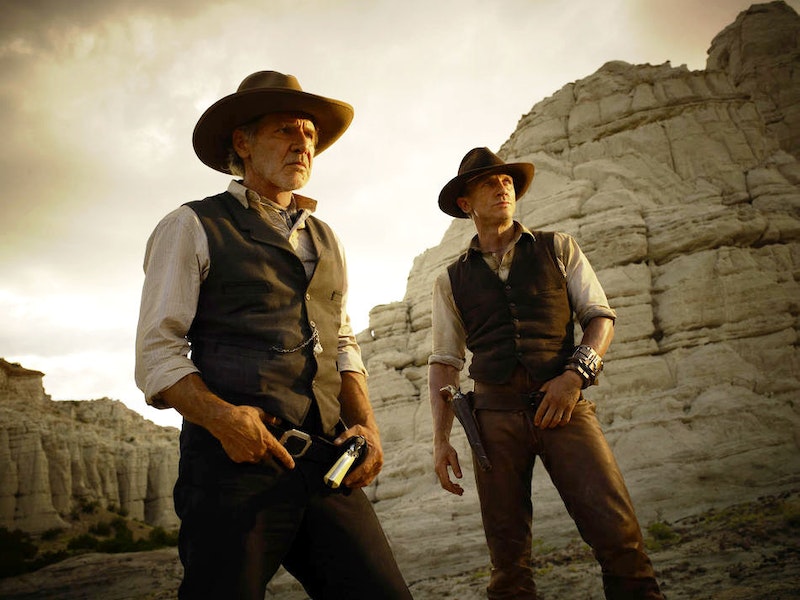 I happened to watch The Bourne Identity the evening before seeing Cowboys and Aliens, and so was forcibly made to remember how much we all seem to like heroes who can’t remember. In both films, a ruthless bad guy is redeemed through the mystical power of having his brains scrambled so thoroughly that he doesn’t know that he’s a ruthless bad guy. As the requisite tough old preacher tells the amnesiac Daniel Craig in Cowboys and Aliens, “God doesn’t care about who you were. He cares about who you are.” History is an unnecessary encumbrance; the idea that who you were might possibly have something to do with who you are is shunted aside for a pseudo-Christian vision of redemption divested of either free will or faith. The bad dudes turned good guys conveniently retain all their skill at violence and none of the guilt that went along with obtaining them. It’s like Saul being saved while keeping his old prestigious job and pay scale, or like the U.S. being absolved of its indiscretions with the Shah and Saddam Hussein but still being allowed to dump bombs on the Middle East whenever it feels like it.

Cowboys and Aliens’ one big advantage over The Bourne Identity is that the latter has the doe-eyed Matt Damon emoting like a well-scrubbed but tranquilized mannequin, while the former has Daniel Craig doing his best badass Clint Eastwood impersonation, which is quite convincingly badass. Also on the plus side is the romantic heat between Craig and Harrison Ford, which isn’t played up as much as it might be, but is still a lot more intense than Matt Damon whining.

On the downside, though, is the fact that Cowboys and Aliens called for a somewhat clever script. The Bourne Identity is just a spy movie; all you needed was for someone to write a by-the-numbers spy movie, and you’re set. Cowboys and Aliens, though, purports to be a genre mash-up, which means that somebody needed to figure out how to integrate Western tropes with sci-fi ones.

Unfortunately, no one bothered. The movie isn’t really a Western, nor is it really sci-fi. Instead, it’s a hollow action/adventure skeleton onto which various Western and horror/sci-fi tropes have been more or less indifferently grafted. The greedy cattle baron, the endearingly goofy bandits, the noble but proud Indians—they’re all traipsed out one after another. Their stereotypical lines and stereotypical conflicts are interrupted by the Horror From the Skies at intervals so regular you half expect an alarm to go off, and, thanks to the alien bracelet on Craig’s wrist, one invariably does. The clumsiness creates a couple moments of delirious dada; my wife almost peed herself when the film inexplicably revealed that Craig’s totem animal is a hummingbird. But most of the blundering was not that endearing, to put it mildly.

Usually the great Westerns have worked off of moral ambiguity; Unforgiven, where even the heroes are greedy and even the villains are sympathetic; or The Searchers, where John Wayne is both champion and obsessive genocidal murderer; or Leone’s spaghetti variations where the only question is which despicable thug you happen to be rooting for. The filmmakers could have tried to add aliens to that mix, creating non-humans as despicably ambivalent, and perhaps occasionally as noble, as the humans themselves.

Instead, though, most of the aliens are just Evil, while one ringer alien is pure Good, a neat binary which ends any hope of subtlety and leaves us with a lot of plot and little point. In desperation, the filmmakers fall back on that old Hollywood standby, self-actualization. The wimpy doc learns to shoot, the young kid makes his first kill, the alpha males learn to work together, the loyal Indian dies nobly, and, of course, Daniel Craig is redeemed. Even the spoiled stupid bully discovers that being captured by aliens can be a growth experience. When you look closely into the maw of a bunch of creatures ripped off from Alien and Predator, you start to realize that humans aren’t so bad after all. The only difficulty is, (a) who the fuck goes to a movie called Cowboys and Aliens for cheerful uplift? and (b) yes we are.