Blood in the Streets

A review of the new Steve James documentary, The Interrupters. 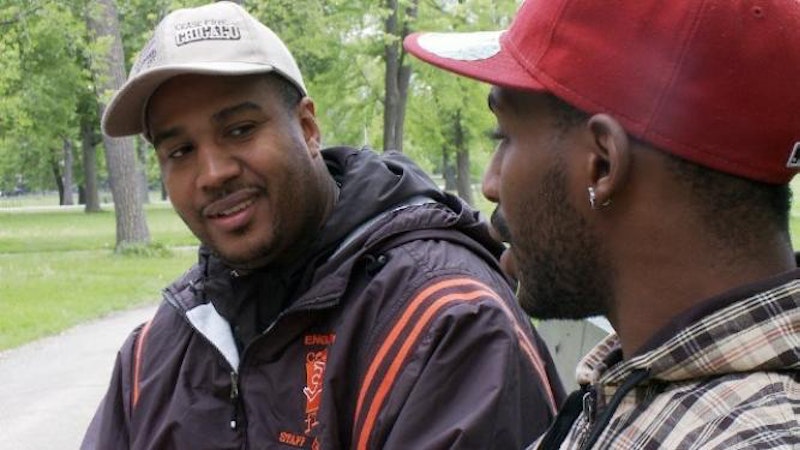 Most of The Interrupters, the new Steve James (Hoop Dreams) documentary about violence in Chicago, is set resolutely at street level, focusing on the efforts of CeaseFire, a group that tries to defuse altercations before they escalate. There are a couple of moments that pull back to give you a national picture, though. One of these is a political press conference following the 2009 beating death of high school student Derrion Albert. Mayor Daley, Attorney General Eric Holder and Education Secretary Arne Duncan all got up dutifully and promised that this would never happen again, no, no, no, not on our watch, not to our children. Which prompted one listener to ask …um, haven’t you said that before?

Of course, Duncan has said that before—and to the same audience, probably. The country is, after all, now run by the same people who have, steadily, determinedly, and for years largely failed the Chicago communities where kids like Derrion Albert grow up. There’s a huge disconnect between CPS’ national reputation for reform and the local reality. In the same way, there’s a huge disconnect, as one community leader and minister points out in the film, between the success of a black President in Washington D.C. and the fact that in that President’s hometown black children keep being placed in the ground.

As it happens, I live half a block away from President Obama’s Hyde Park home—close enough that when he visits town my street gets closed off and I have to show an ID to get in my front door. I live within walking distance of some of the communities, like Englewood, featured in the documentary too. And yet, the bulk of The Interrupters might as well have been filmed on the moon for all the connection it had to my own experience of Chicago. For example, there’s one scene where CeaseFire worker Ameena Matthews addresses a roomful of mourners and declares that she’s the daughter of Jeff Fort. Everybody knows who she means… but I wouldn’t know Jeff Fort from Adam if the filmmakers hadn’t thoughtfully informed my white ass that he was a major gang leader in the cities through the 60s and 70s, now serving life in prison. Similarly, I’ve lived in Chicago almost 20 years and never seen a gun, much less seen anyone shot with one.

I’m aware, of course, that the Chicago I know isn’t the only Chicago. For one thing, I’ve got a friend who’s a schoolteacher on the south side… and, inevitably, he’s had kids in his classes who were victims of gun violence. Just as inevitably, we watch a teacher react in The Interrupters to the news that the neighbor of one of her middle-school students was recently shot. The teacher reacts with grating perkiness (“You can talk to me about that you know!”) which I would feel much more comfortable sneering at if I thought for a second that I’d handle such a revelation with any more panache. In any case, the kids very kindly ignored her, and turned to talk to Eddie Bocanegra, a former gangbanger and murderer turned CeaseFire worker, whose credibility is clearly exponentially higher within his Hispanic community than that of some random educator’s.

That credibility is clearly central to CeaseFire’s mission. “We’ve got more than 500 years of prison time in this room!” one interrupter declares in a meeting. “That’s a lot of wisdom!” It’s also a lot of cultural capital when you live in occupied territory. Cops, various people note, are afraid of the neighborhood and are feared and mistrusted in turn. Outside politicians want to solve the problem through bringing in the National Guard, a tactic which, community members very reasonably point out, is likely to end up with more, rather than less bodies. The community is defined in opposition; it’s those who have fought the power who are trusted. You have to have lived the life in order to have the right to speak.

Many of the most poignant moments in the documentary are about this truth, demonstrating the hard-earned knowledge the CeaseFire workers bring to their jobs. Ameena Matthews, for example, grew up fatherless; and was physically and sexually abused at a young age. She sees herself in a young girl named Caprysia. Caprysia’s mother is an addict; she couldn’t stop her younger sisters from being shipped off to DCFS. Caprysia herself is in and out of jail, radiating rage and despair. Ameena takes Caprysia for manicures, tries to get her to go to school, scolds her, worries about her, and cries over her like a mother. One of the most painful moments in a very painful film comes when Ameena asks Caprysia rhetorically, “Are you worthy of love?” and before Ameena can answer her own question in the affirmative, Caprysia interjects a sullen but heartfelt, “no.”

In a subsequent scene, though, Caprysia leaps up and down with joy when Ameena visits her in juvie, and refers to her as “my mother.” She may not be a blood relative, but by virtue of will and love and community, she’s family. Some CeaseFire muckity-mucks talk at length about how violence is a disease and needs to be treated epidemiologically and blah blah blah. But it’s clear from watching Eddie and Ameena and the third interrupter, Cobe Williams, that CeaseFire is really built on people caring for each other. The movie is about a community sorting out its shit.

The question is, how it that community defined, and why? Or, to put it another way, why isn’t this my Chicago? There are various answers, but one of the main ones has to do with a systematic history of segregation—a history that is by no means ended.

In that vein, I understand why the filmmakers wanted to keep themselves out of the picture, but I wish they had put themselves on camera, or at least more explicitly acknowledged their own presence, once or twice in the documentary. After all, they’re not outsiders looking in. The neighborhood they show is their neighborhood too, both because Steve James is a Chicagoan and because—as the film itself demonstrates, albeit indirectly—there they are, in the room and on the streets. If the story is about the community, then they’re part of the story.

As am I. These are my neighbors, even if I don’t know them very well. When Chicagoans like me look at the communities in which CeaseFire works and say, “Those are our kids. Those are our schools,” maybe fewer children will get shot. That kind of change in attitude isn’t easy, but it’s more helpful than calling in the National Guard. The Interrupters, anyway, makes the case that if you want less killing, you need, not more guns, but more neighbors.