The Foul Stench of Success

Billy Corben's Broke and the Economies of Sport. 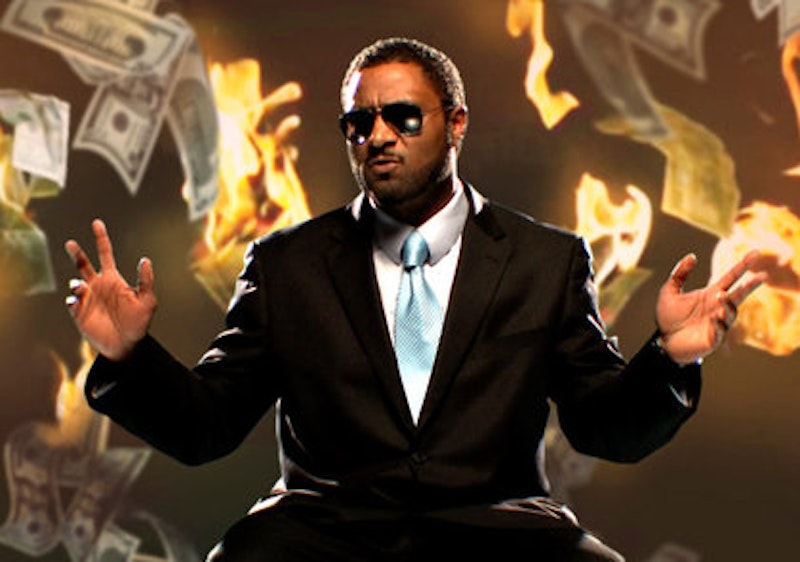 When it debuted on October 2, 2012, Billy Corben's Broke garnered the highest ratings yet for ESPN's popular 30 for 30 series. Yet despite its objective broadcast success, Broke is a film that nobody really seems to like. The typical critical complaint is that the content is interesting, but Corben tries to pack too much information into the documentary's somewhat bizarre formal package. And on the surface, this complaint makes sense, particularly if one views Broke with expectations derived from the construction of the typical 30 for 30 installment, or, for that matter, any of Corben's previous films. But what this critique fails to take into account is that, unlike nearly every other film in the series, Broke isn't telling the story of a particular athlete or team, but is rather making a more complex case about the economics of professional sports and how they reflect the flaws of some of our most deeply held cultural assumptions. And to make this case in a relatively economical 75 minutes, Corben cultivates a complex tension between the film's content and its formal structure that is a work of cinematic prestidigitation.

In plenty of important ways, Broke, which, after The U, is Corben's second contribution to 30 for 30, is of a piece with the rest of his body of work. But it's the subtle-not-so-subtle differences that distinguish the film as a sickeningly effective formal experiment. Like his earlier films, Broke reflects Corben's penchant for the schizophrenic directorial/editing style of television commercials and a schlockmeisterly attention to lurid detail. In films like Cocaine Cowboys, Square Grouper and Limelight, the director's rapid-fire layering of interviews and archival footage, overlain with borderline intrusive visual and musical cues that announce a sort of aesthetic historicity, is employed in service of advancing a particular story. And while these elements are clearly in play in Broke, something decidedly more tedious and strange is going on.

Corben's strategy of radical accretion of information is certainly in full force in Broke. But here the relentless torrent of anecdote and historical detail is designed to leave the viewer with an indelible impression of a system that, as the title punningly suggests, is almost irreparably broken. Corben assembles a diverse cast of former athletes, including Jamal Mashburn, Bernie Kosar, Andre Rison and Curt Schilling, and financial professionals, such as former NFL linebacker Reggie Wilkes, whose clients include several pro athletes. Corben makes a conscientious decision to analogize the financial chicanery of professional sports with the sweep of America's economic health through the 1990s and '00s—from orgasmic boom to apocalyptic bust—and thus the film's first act focuses on stories of the obscene wealth many young athletes acquired virtually instantaneously in the freewheeling final decade of the last century and on the equally obscene ways in which they squandered that wealth.

Again, the strategy here is not the gradual construction of a story, but rather the relentless accrual of repetitive detail, and the viewer soon realizes that something unusual is happening. Corben bends his style in on itself here, as though he intentionally exhausts the style early on and part of the experience of watching this documentary becomes its tediousness. This where the formal and textual discrepancies that are at the heart of Corben's strategy in Broke become apparent.

In a way, it’s probably useful to think of Broke as more of a sort of self-help video than as a documentary. This is not just in the way that the film seems to have been made as much as an instructional tool for young athletes as viewing fodder for ESPN fans. But also, in a more strictly formal sense, Broke resembles nothing so much as an infomercial for the sort of financial freedom seminar one associates with the sort of fin-de-siècle huckster typified by Tony Robbins. As I mentioned above, Corben's films generally feature a distinctive sonic and visual profile, which tends to convey a sense of historicity that formally links the film to the time and place of the story it unfolds. With Broke, Corben chooses visual and sonic touchstones, including dollar bill-motif titles and backdrops, and an obtrusively unobtrusive, vaguely anodyne score, that combine with the encroaching tedium of the anecdotal onslaught to give the film a particular semiotic footprint that is fundamentally at odds with its textual content.

I want to stop for a minute and talk about that fucking music. Ambient music features prominently in all of Corben's films, but here again the director tweaks his usual formula to insidious effect. This is the sort of musical signature that feels as though it were birthed from a marketing laboratory, designed to lull viewers into unwitting receptivity. And it never stops, or at least almost never. In fact, it drops out for just one brief moment in the film, when former Miami Dolphins offensive lineman Leon Searcy recounts how he used the entirety of his $60K injury severance, after giving 10 percent to his ex-wife for child support, to purchase a brand new Hummer H2.

This is a really important moment because it highlights one of the primary ways in which the film deconstructs itself. Taken at face value, the message of the film is that professional athletics as an industry systematically creates conditions in which young athletes are given a false sense of economic security when in fact they are paid relatively large sums for careers that can only reasonably be expected to last an average of three-five years, leaving a trail of broken bodies, bankruptcy and financial ill-preparedness in its wake. This is unquestionably so. And yet, the film subtly undermines this message in a number of ways.

The first, and easiest to spot, is typified by Searcy's tale of financial stupidity. The entire second act of the film is predicated on the fact that rookie professional athletes are young twentysomethings who have yet to learn to navigate the vicissitudes of the adult world—paying rent, buying furniture, making car payments, accounting for taxes—and that this is getting them in financial trouble. But what twentysomething fresh out of college (or high school) doesn't face the same problem and on a salary much lower than even league minimums? To suggest that this is only a problem for professional athletes—which I don't think Corben does—is at the very least a classist, and quite possibly a racist proposition. Of course, the broader point conveyed is that America's obsession with Great Wealth, a cultural tendency that is amplified to the point of absurdity in the world of professional athletics, trains these kids into thinking that once they get their first big league paycheck, their financial worries are over. There is no doubt a lot of truth to this, yet the discrepancy remains.

But where things get really interesting is in the slippage that is revealed between the film's textual content and its formal characteristics. As noted, the film's visual and sonic cues associate it with the sort of vague financial freedom boondoggle that perpetuates the myth that wealth can be obtained with relative ease and with a minimum of smarts. Though nobody is arguing that professional athletes don't work their asses off in order to achieve their success, it's a similar sort of delusional, what-could-possibly-go-wrong optimism that made a lot of 90s-era multi-millionaires, athletes or otherwise, look pretty foolish at the turn of the century. And in the last third of the film this formal identification with the dubious business of getting rich quick reaches farcical heights when several of the athlete participants gather in a lavishly appointed conference room with financial advisor Ed Butowski for a “Financial Literacy Boot Camp.” Here again, I don't mean to suggest that Corben is somehow implying that Butowski's insights and advice to once and future athletes is anything but sound—nor do I mean to imply this myself—but there is clearly something cagey going on here.

Put simply, Broke is a film that presents us with an overabundance of textual evidence supporting the claim that an American ideology that fetishizes wealth and the totems of conspicuous consumption is heightened to the point of absurdity in the world of professional sports, leaving too many athletes physically and financially broken and ill-prepared to function in society at the end of their short careers. At the same time, this textual content is delivered in a formal package that bears the signatures of the seamiest side of that ideology. The discrepancy here serves a dual purpose. First, Corben seems to be acknowledging that the social and cultural dynamics at work here are rarely as simple as they seem and thus cautioning against snap judgments and easy moralizations. But more critically, Broke is an ambitious exercise that, through its internal inconsistencies, exposes the operation of this ideology, allowing us to see its pervasive destructiveness at work.