Eighteen Pairs of Shoes Is All You Get From Stoker

That and some mangled Hitchcock devices. 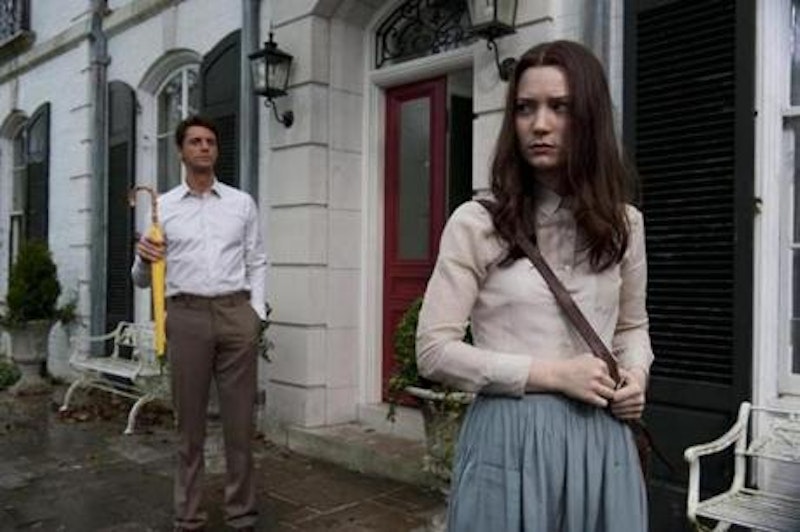 There’s a scene near the middle of Stoker that sums up what makes a lot of the movie so boring and predictable: 18-year-old India (Mia Wasikowska), a brooding loner grieving the horrific recent death of her father in a car accident, paces the courtyard just outside her school, trying hard not to attract attention or bother anyone. Packs of faceless bullies and bystanders mill too, waiting for a fight to break out. India Stoker, steely and emotive as a piece of furniture, gets called “Stroker” by the meatheads at lunch, a crowd forms, the blond exemplar puffing his chest at this weird goth-ish sort of girl with no friends and an intimidating aloofness about her. Yeah, she stabs his hand with a pencil. Stoker is full of scenes like this, ones we recognize immediately and know top to bottom. I won’t bother transcribing any of the dialogue from this movie because it’s full of bad Hollywood screenwriter assumptions, like: the audience cares about your extremely revelatory modern take on Hitchcock devices.

Find new ways to make movies! No one cares about your take on Hitchcock, even if they don’t know it, and Hitchcock is done, his style does not need to be imitated or paid homage to anymore! Park Chan-wook’s best-known film, the deliriously exciting and inventive Oldboy, will never enjoy a wide American audience because it’s in Korean. So, the logic follows that Chan-wook’s first film in English—let’s dilute and compress every odd thing that the director might have tried and reduce the dialogue and story into a bland mush of signifiers that ambush a interesting setup with some unusual ideas into a product whose vision is completely interchangeable with an infinite amount of B movies available to stream on Netflix right now.

This wasn’t going to be a blockbuster anyway, why make it fit into a dumbed-down American mold? There is no feeling in this movie at all. The characters are ciphers filling in for convincing human beings, the whole production, a reflection of a reflection of the way everyone does a movie, instead of trying new things so that we see new things, new ways of seeing things. Sounds like pamphlet drivel but there is an enormous well of potential energy left untapped at every level of American filmmaking.

What redeems Stoker in the lightest is its gorgeous cinematography and framing, with a number of really amazing shot pieces (especially a rolling fade of 18 pairs of black and white penny loafers given to India by her father on every birthday, from smallest to largest), but this movie doesn’t fully appeal to anyone. It’s in between a hackneyed horror suspense mall megaplex filler and a disconnected art film that doesn’t know what it wants out of the audience. Everyone in this film is so disconnected and robotic the viewer is never allowed in to actually understand what they’re feeling. So of course there’re a few deaths, and heavy-handed metaphors for sex, and it’s 2013, and we’re digging our heads deeper and deeper into the sand.