The Delirious Deathlessness of Scooby-Doo 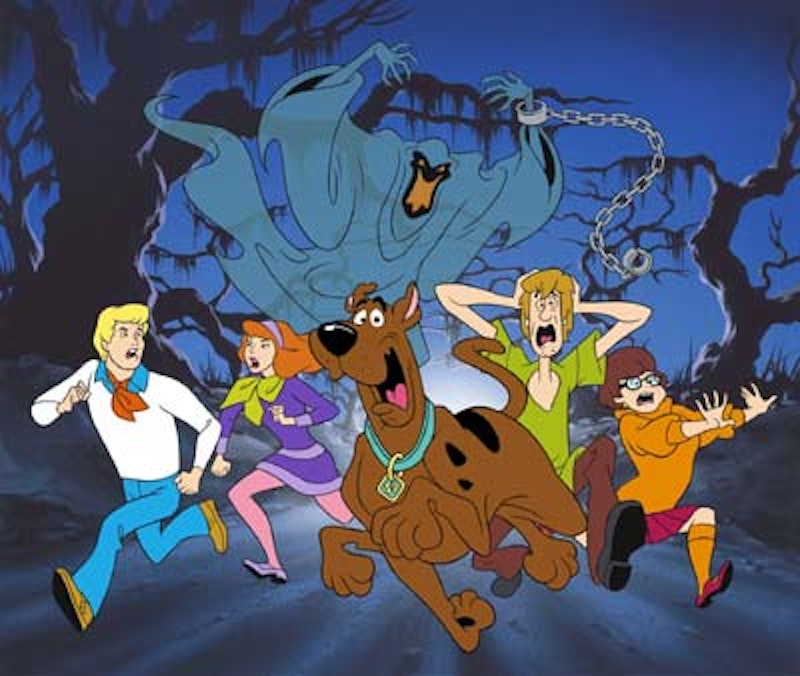 The whole idea of nostalgia is based on interrupted continuity: you love and/or are indoctrinated to something for a while, and then you either abandon it or it abandons you, then you catch yourself missing it against your will, then maybe that something is re-imagined as a big-budget, poorly conceived Hollywood blockbuster. Scooby Doo is different—anti-nostalgia nostalgia, if you like—in the sense that Scooby-Doo never really went away. Like The Mighty Morphin’ Power Rangers, the tale of four shiftless, meddling kids and their disturbingly humanoid canine evolved and shifted and was rehashed and reheated and reserved ad nauseam, one series and one-off straight-to-DVD cartoon and risible Hollywood abortion and tchotchke after another with no end in sight; this franchise is long enough in the tooth that there’s actually a “Modern Scooby-Doo meets Golden-Age Scooby-Doo” episode from the aughts wherein contemporary Fred clowns vintage Fred for his taste in accessories. (Some of what’s out there is nearly unwatchable; if the phrase “bucket ‘o stewed tomatoes” is familiar to you, you’re well aware of the depths to which runaway remakes can sink. Interestingly, each successive iteration has the effect of underlining the brilliant simplicity of the late 1960s/early 70s laugh-track smothered original series, which I’m watching tons of these days because, well, my five-year old can’t quite get enough of false ghouls and foggy swamps and rundown mansions and Casey Kasem’s stoner-bro guffaws.

A couple of years ago a TV Guide pundit theorized that the popularity of police procedurals can be boiled down to something really simple: people like to watch actors portraying co-workers getting along well and getting shit done, kicking ass and taking names. Why kids like Scooby-Doo isn’t too hard to figure out: talking dog, snacks, danger, kids saving the day by revealing that adults are up to no good. But if you’re in an indie-rock band, you probably like Scooby-Doo because it portrays five mammals traveling all over the place together in a van without hauling off and punching one another or screwing groupies in the van and leaving a mess or falling asleep while driving or playing cruel gross tricks or ordering disgusting food but not eating it while keeping it in the van; everybody’s chipper and positive and adventurous in a way that’s downright wholesome, they don’t ever look like they slept in their clothes, the van is clean and it doesn’t break down much and when cops stop the van it’s to ask for help with some confusing mystery or other and not to send in the drug-sniffing dogs. No one ever breaks into the van to make off with equipment and journals and rare vinyl picture discs scored on tour. You know. Probably.

When Nodin was younger, there was a live-action show he couldn’t get enough of about a trio of outrageously-pigmented, vaguely Canadian musicians called The Doodlebops. It was pretty weird. The band was managed by a sassy, teleporting woman who rhymed everything she said; a Brooklyn-type in a pathetic attempt at a Michael Jackson jacket ferried them to gigs in a cheese bus; there was a talking moose’s head on a wall in their house who remains, to this day, one of the singularly most fucked up things I’ve ever seen on a children’s television program. I always liked to imagine that the three had been kidnapped and genetically altered and brain-wiped, that behind their friendly, pliable facades Jasmine, the manager, and Bob, the bus driver, had conspired to enslave these kids for kicks and financial reward, sort of a less cryptic Orphanmaker/Nanny scenario or something. I bring all this up because, really, a fun way to think about the original Scooby-Doo and its less-than-worthy successors is to interpret every harebrained, improbable mystery concocted, storyboarded, voiced, and animated between the late 1960s and last week as yet another permutation of a hyper-potent never-ending hallucinatory loop as experienced by Fred, Velma, Shaggy, Daphne, and ol’ Scoob collectively, en masse, with all the requisite peaks, troughs, valleys, and laughably corny monster costumes.

A Simple Plan, “The What’s Up, Scooby Doo? Theme”

You probably opted to click this link to this article on the Splice Today site because you grew up with one or several glosses on the Scooby-Doo mythos and wondered what was written about him here, with the expectation that you might peruse the piece briefly before returning your attention to work, a present lover, or the fractured wreckage of your life, thoughts free and clear of all Scooby-Doo iconography and lexical detritus. If you’ve watched the YouTube clip above, you already know how laughable a notion that is. See, this maddeningly Bubble Yum sticky power-pop punk imagining of what a Scooby-Doo theme song should be is as catching the Black Plague; you’ll never really be able to excise or outrun it, no matter how many times you force yourself to listen to that “Oh Mickey You’re So Fine” song. Until death do you part—and maybe not even then.