Martha Marcy May Marlene is ruined by a clumsy ending. 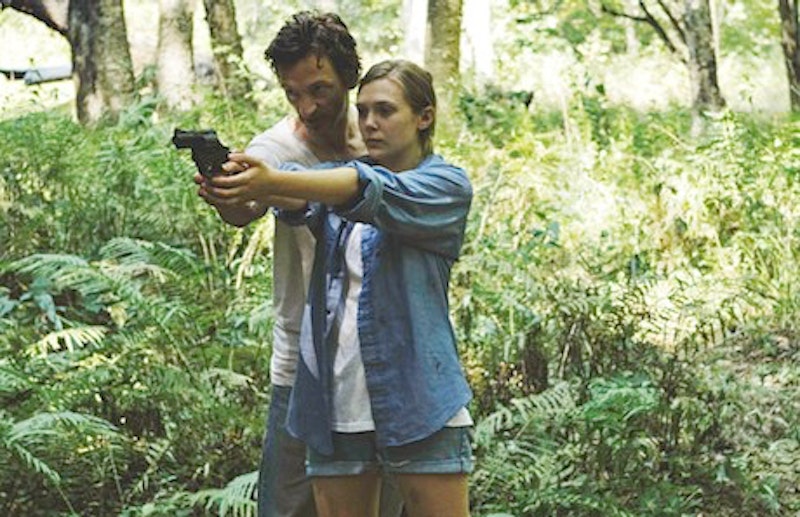 Martha Marcy May Marlene should be a great movie. And it is, for almost entire 101 minutes. Sean Durkin's directorial debut is dry as a bone and as tightly wound as its titular paranoid bruised peach (Elizabeth Olsen), but the film feels neutered and unfulfilled because of a sudden non-ending. Quickly: Martha Marlene is somehow sucked into an abusive and cultish farming clan in the Catskills, raped and renamed Marcy May by their Koresh-esque leader Patrick (John Hawkes). Patrick's got scores of these girls and boys at his disposal—who knows how he got them and how he keeps them. But we see Martha leaving after two years at the commune in the first scene, and the film deftly switches back and forth between her time in the mountains and her psychological convalescence with her hoity toity sister and alpha male fiancé in their opulent Connecticut lake house.

Seamlessly, we amble between scenes of mass family meals, people doing chores, reverently watching Patrick play guitar and sing, and the emotionally distant interactions Martha has with her sister later on, as the pockmarks of her abuse make her into an ossified and petulant pill. That's not to blame her at all—Martha is miserable and alienated throughout pretty much the whole movie, and Olsen does a fantastic job capturing the kind of wrecked and devastated psyche one can only imagine withstanding after that trauma.

It makes you feel as isolated and cold as Martha, and remains fascinating and gripping, but the way the movie ends is so out of place and at odds with the rest of its bold approach that I have to guess they just didn't know how to finish it. It's become something of a cliché the past several years in "indie" cinema, from the art/underground to astroturf indie to that insufferable Mumblecore pox, to punt on the ending. They don't mean to, of course—but these are people who still think close-ups of pretty non-pretty girls staring wistfully off camera makes for good psychological insight and will be ripe for interpretation for more than five minutes. I was disappointed because this movie was better than that, the easy cop-out ending where we're left to guess where poor Martha ends up, or why she ever elected to join that awful farm in the first place.

I understand how a tightly narrowed and focused gaze can work with the material, but it felt incomplete in the worst way: they didn't have anything better so they just took the safe bet and let us decide—without any interesting or compelling evidence one way or the other—if Martha's paranoia had actually begun to manifest in hallucinations. Durkin's film winds and tenses itself up so nicely that you'd expect its ending to be just as bold and artfully executed, even surprising (like Secretary, which leads with a similarly damaged girl being seduced, but ends gleefully as a BDSM storybook fairy tale). You can make the argument that there isn't much else to say—Martha's not going to open up any time soon. But the lack of insight and disconnection from her deeper character doesn't feel artful, it feels like there was never anything there to explore.