The Daring Iconoclasm of White Self-Regard 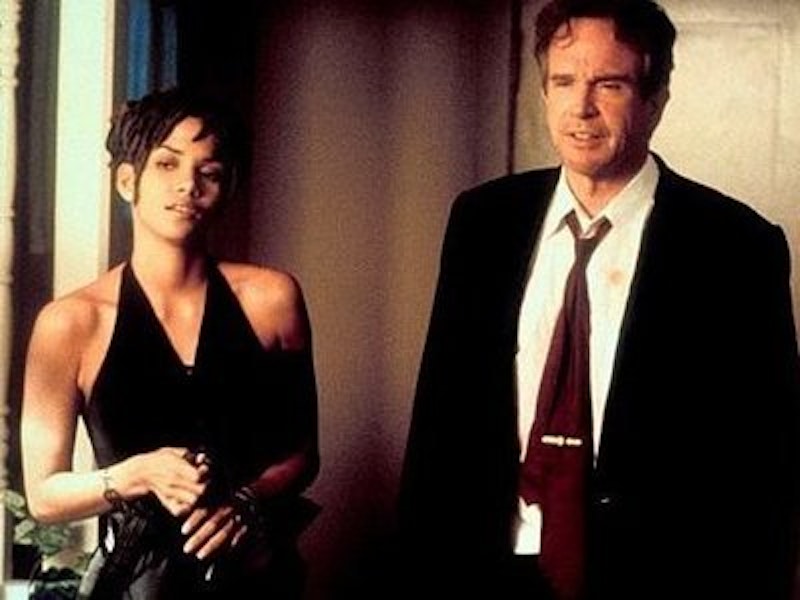 This is the 13th post in a series on political films. The 12th, on The American President, is here.

"You know you're my nigger," Nina (Halle Berry) tells Sen. Jay Billington Bulworth (Warren Beatty) at the end of Bulworth (1998). Nina is providing validation, both moral and sexual. Bulworth, the old, white, corrupt senator has cast aside his age (Berry is fully 29 years younger than Beatty), his whiteness and, consequently, his corruption. When people called Bill Clinton "the first black president" they meant he was soulful, cool, and virtuous. Similarly, Nina, by declaring that Bulworth is an honorary black person who she’d like to sleep with, transforms the establishment doofus asshole into a virile champion of the underdog.

Bulworth has often been praised for its "unrepentantly cynical" view of politics. The film embraces a left-wing populist Sandersesque view of the system. Republicans and Democrats are both in the pocket of big donors, most notably the insurance lobby, one representative of which (Paul Sorvino) flat out says that his company doesn't want to give policies to poor black people because they're all lazy crack addicts. California Sen. Bulworth is so disgusted with his own hypocrisy and shallowness that he has a suicidal break, and hires a hit man to murder him. While waiting for his death, he’s suddenly released to say all the things senators aren't supposed to say: that neither Democrats nor Republicans care about black voters, that Hollywood entertainment sucks and is run by Jews, that socialism is the true path to equality and happiness for America.

The presentation of populist anti-Semitism as brave truth-telling is indicative—the film is not nearly as iconoclastic as it pretends to be. On the contrary, Bulworth is yet another iteration of that old Capra standby, Mr. Smith Goes to Washington. A senator dares to speak truth to power and oppose corruption, and as a result common people, and movie viewers, rally to him. Bulworth's jeremiads against the establishment give him a landslide win in the competition for his senate seat, just as Sanders' jeremiads against the establishment allowed him to crush Hillary Clinton in the Democratic primary. Bulworth's shining virtue is so inspiring it even transforms Compton drug-dealer L.D. (Cheadle) into a community philanthropist, with a new dedication to helping black youth. "Why are there no black leaders anymore?" Bulworth asks at one point. The film provides various answers, but the one it really believes is that there are no black leaders because not enough white senators are into hip-hop.

As this suggests, Bulworth's clueless optimism about politics is matched by its clueless, and enormously self-serving, optimism about race. In a television interview during the campaign, Bulworth, dressed in hip-hop sweats, explains that the solution to racial tension is an "open-ended program of procreative racial deconstruction/Everybody just gotta keep fuckin' everybody till they're all the same color." This tired argument for post-racial utopia via intercourse is treated by even black characters in the film as if it's some sort of revolutionary insight. Yet Thomas Jefferson slept with 14-year-old Sally Hemings some 200 years ago, and still didn't free their light-skinned children. White and black people, being human, have always been attracted to one another, but that attraction has been as likely to result in exploitation, rape, and violence as in solidarity. Nina, who’s presented as invested in and knowledgeable about civil rights history, would certainly be aware of that. Why doesn't she tell Bulworth he's full of shit, rather than reacting as if he's some kind of white Messiah?

The reason Nina doesn't tell the Senator he's full of shit is that Bulworth doesn't really care about racial injustice any more than the political system it criticizes cares about injustice. Instead, the film is primarily invested in the sadness, guilt, and self-esteem issues of rich white people—or, at least, of one particular rich white person. Fucking across racial boundaries is not a path to equality, but it obviously has an appeal for old white dudes like writer/director Beatty if it means canoodling with Halle Berry.

Blackness for Beatty doesn't just mean sex, though. It means relevance, cool, and most of all virtue. Bulworth is half Mr. Smith Goes to Washington, but it's also half Red Dawn. The 1984 film is a conservative fever dream, in which middle-America is invaded by Russia and Cuba, and white Colorado football players are transformed into subaltern resistors, possessed of the ethical righteousness of oppressed people of color.

Bulworth is the same vision through a lefty lens. The Senator says plaintively at the end of the film that he feels "insecure" because he's white. That's the point at which Nina tells him he's her "nigger," underlining the central point of the film, which is that black people, black culture, and black oppression exist to help aging wealthy white men through their mid-life crises.

The film does mock cultural appropriation to some extent. There's a good running gag in which a white cameraman babbles on endlessly about the evils of anti-black racial injustice to a black woman—a sequence which seems to be an intentional deflation of Beatty and his talky, polemical film. And of course, Bulworth's clumsy rapping and ghetto-drag sweats are supposed to be funny.

But Bulworth's clumsy rapping and ghetto-drag are also supposed to be sexy, powerful, impressive, and daring. As soon as the Senator starts rapping, multiple black women young enough to be his daughters throw themselves at him. Dressed in his sweats, he nobly stands up to brutal cops hassling black kids. And finally, the film ends when he’s shot by an insurance executive for his brave defiance of the elite. Given the discussion of murdered black civil rights leaders earlier in the film, Beatty, as writer, director, and actor, is comparing himself directly to Huey Newton and Martin Luther King.

Bulworth is meant to expose the pervasive racism of American society. It does that, though not quite in the way it intends. Instead of showing how racist the establishment is, the film mostly underlines how racist the anti-establishment is. The fact that you can easily reconcile raging against the elites with white supremacy shouldn't be surprising in the era of Trump. Still, Beatty's self-congratulatory film, with its condescension to and sexual fetishization of black people, is a good reminder that "brave iconoclast" is often simply code for "white savior."