On Deepwater Horizon and Masterminds. 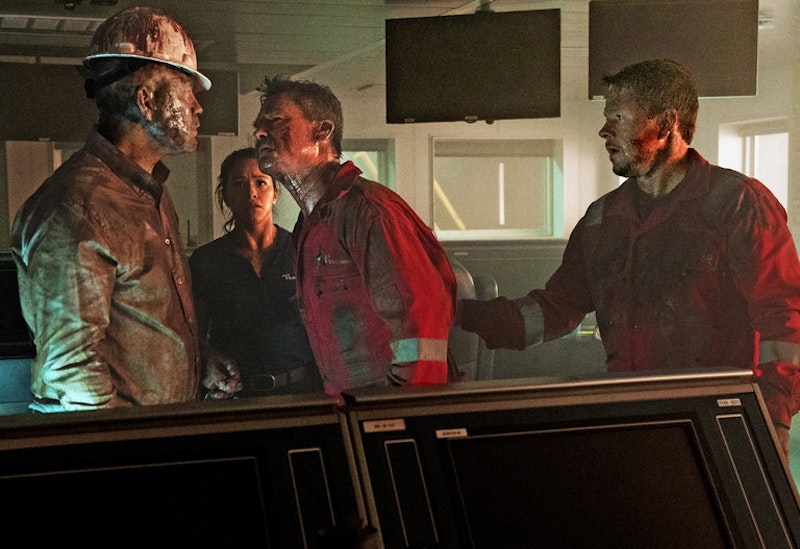 Deepwater Horizon represents one of the better examples of a new subgenre that’s gained cinematic purchase in recent years. The star is usually Mark Wahlberg. The director is usually Peter Berg or Michael Bay. It’s usually based on a true story. And it usually extolls the virtues of tough, no-nonsense blue-collar men, while knocking the scourge of officious, sniveling bureaucrats.

Ber and Wahlberg's Lone Survivor is part of this, as is (most likely) his upcoming Boston Marathon bombing tick-tock Patriot’s Day (also with Wahlberg.) Bay’s Benghazi film 13 Hours was too, and to a lesser degree his Pain and Gain.

One of the better things about Clint Eastwood’s American Sniper was that it was so complex and nuanced that it didn’t fit in this genre. But that’s the exception rather than the rule. When Marcus Lutrell, whose story was the basis for Lone Survivor, spoke at the Republican Convention this year, I joked that you could fill a whole night at the RNC with just guys Mark Wahlberg has played in movies.

As these things go, Deepwater Horizon is actually pretty well done, because it mostly avoids the shaky-cam and other unfortunate tics Berg has leaned on in his past work, and also because the BP bean-counter villains of the Deepwater Horizon disaster really were just that and worthy of every bit of ridicule. There are some real problems around the edges, but overall it’s a winning effort.

The film focuses on crew members on the Gulf of Mexico oil rig, led by Wahlberg and Kurt Russell. They arrive, they realize immediately that the BP stooges on board are cutting corners and skipping out on important safety measures, and you know what happens next: The rig blows up, as it really did in the spring of 2009, and the film’s second half consists of the crew attempting to escape the burning vessel. Meanwhile Kate Hudson, as Wahlberg’s wife, worries from home, in a mostly phoned-in performance.

You may remember the Deepwater Horizon as the event that led to a months-long oil gush in the Gulf of Mexico that was one of the worst environmental disasters in human history, as all of the world’s smartest engineering minds came together to solve the problem and failed repeatedly as the oil continued to flow. Berg, as you may have guessed, isn’t especially interested in environmental disasters; the spill itself is just a mere footnote at the movie’s end.

The action is mostly well-staged by Berg, who stepped in as director at the last minute after the departure of a very different sort of filmmaker, All is Lost’s JC Chandor. The stars are good, even if Wahlberg is playing a character not appreciably different from his usual screen persona. Russell continues his recent career resurgence, and once again, all these years after Backdraft, he’s hanging from large structures with fire all around him.

In a bit of perfect casting, the two main BP corporate stooges are portrayed by Brad Leland (Buddy Garity from Friday Night Lights) and John Malkovich, playing the part with a luxurious, unintentionally hilarious Cajun accent. I was laughing uproariously just about every time Malkovich opened his mouth. I actually wouldn’t mind a whole other movie about the oil spill cleanup, provided Malkovich agreed to return as the same character.

Some things, though, aren’t so great. While there’s no shaky-cam, the action can be hard to follow and the film doesn’t do the greatest job establishing the geography of the rig itself.  And the lone major female character, played by Jane the Virgin’s Gina Rodriguez, is treated somewhat unfairly by the film—she’s introduced failing to start a car, while the climax of her character is being urged by a man to do something heroic. You’re expecting her to have a redemptive character arc that never quite materializes.

I must admit I was looking forward more to the Berg/Wahlberg Boston Marathon movie, as it seemed a more naturally cinematic story. But Deepwater Horizon is a pleasant surprise.

Masterminds is a singularly odd movie. It’s based on a true crime story that’s not especially well-known or even all that interesting, but tells the story uncommonly faithfully. It features some of the best comedy talent working today, but in most cases fails to best utilize it. It brings back the director of Napoleon Dynamite, omitting that film’s best qualities (delightful quirk, wonderful character work, a singular visual style) and embracing its worst (over-reliance on mock-the-yokels humor). Worst of all, it just isn’t all that funny.

The film tells takes us through the Loomis Fargo armored truck robbery in North Carolina in 1997, a true story that’s relatively obscure and not that exciting except for the money involved (more than $17 million, making it the biggest heist in U.S. history).

Zach Galifianakis plays David Scott Ghantt, the “mastermind” of the robbery, although I suppose that’s an ironic misnomer since he’s a blithering idiot. Ghent is a security guard who, since he’s smitten with a coworker (Kristen Wiig), is roped into a scheme by a group of small-time criminals (led by Owen Wilson) to rob the business of millions in cash. Ghantt also has a fiancee (Kate McKinnon) who’s a nightmarish trailer-park caricature, although McKinnon makes it work because she’s Kate McKinnon.

The plot twists into a sojourn to Mexico, where Galifianakis is chased by the Federales, as well as a hitman (Jason Sudeikis), and ultimately pursues revenge against his co-conspirators.

White trash caricature is the film’s default mode, which comes across more as cruel and mean-spirited than anything else. It’s the sort of movie that would get picketed by the Redneck Anti-Defamation League, if such a thing existed.

Beyond that, the movie’s biggest failure is what it does with the Ghantt character, with Galifianakis playing him as something akin to his character in The Hangover only with a lobotomy—a manchild who at the end of the day is just really slow on the uptake, in a not especially funny way. (He’s also repeatedly described as “stocky,” which is sort of jarring since the actor playing him has lost a dramatic amount of weight.)

Wiig is a highlight, getting a chance to show some range, while McKinnon steals her handful of scenes. And, warning to Lady Ghostbusters-phobes, Leslie Jones is in it too. (Lorne Michaels is an executive producer, which likely explains the SNL-heavy cast.) As for Owen Wilson, 20 years ago he was in Bottle Rocket, a much better movie about out-of-their-depth criminals. His character is also introduced as a the biggest sleazebag ever but comes across as more of a garden-variety bad guy.

That’s just one of many things that doesn't make much sense, like Ghantt suddenly being really good at fighting, or the part where Ken Marino becomes an informant for essentially no reason, or a catfight sequence you're more likely to find in a movie from '97.

Ultimately, there just aren’t that many laughs. In fact, in another callback to Hollywood comedies of the '90s, there’s stuff in the gag reel at the end that’s much funnier than the actual movie.