No other filmmaker pushed the medium forward in front of so many people for so long. 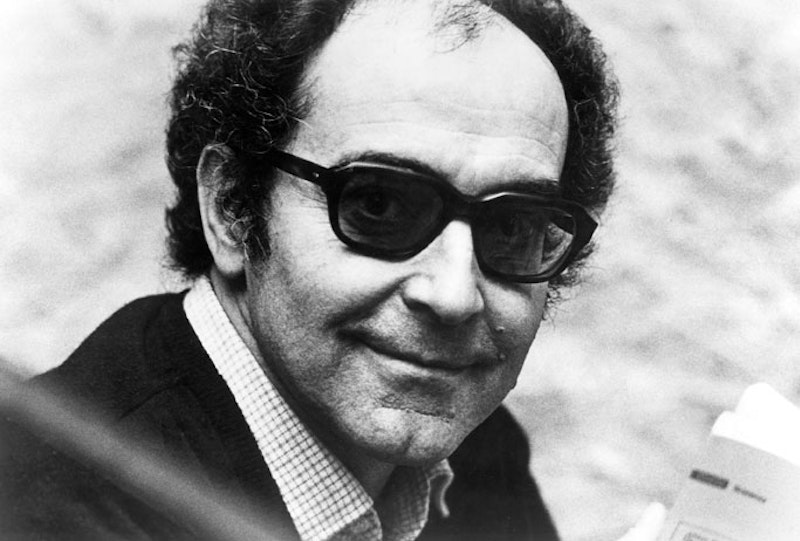 On Tuesday, French actress Emmanuelle Devos asked on Instagram: "Charles is succeeding Elizabeth, but who's going to succeed Jean-Luc?” Isabelle Huppert has said before that, “When Godard dies, we will all be orphans.” The fact that Jean-Luc Godard was not only still alive but working in my lifetime is amazing: he released his best film, The Image Book, just four years ago, and when it played briefly here in Baltimore in early 2019, I saw it three times in as many days at the Parkway, and what floored me more than anything else was how futuristic it felt. Despite its mournful and often disturbing text, The Image Book was invigorating simply because it was the work of a man approaching 90 whose mind was as sharp and perceptive as ever.

Godard avoided becoming a museum piece of the 1960s not only by moving forward but simply surviving. Bob Dylan’s post-1980s work has its defenders, but no qualifications are necessary for any period of Godard’s work. All of it is essential. As with every artist, there are peaks and valleys, but he never passed the point of no return, when people stop caring. Dylan is often called Godard’s musical equivalent, but even he’s flanked by centuries of brilliant composers and songwriters. Cinema has only existed for 172 years and Godard was alive for 91 of them. When speaking of musical equivalents for Godard, one must reach back further, without the risk of hyperbole in invoking Mahler, Penderecki, even Beethoven.

It’s important to understand that Godard was the only major filmmaker who dedicated his life to understanding the medium of cinema as he was practicing it. “The best way to respond to a film is with another film”—a few days ago, a close friend told me about a lecture she attended where a documentary filmmaker said, “It takes three years to get your first feature made.” If that were true, it would mean the medium is dead, or at best, irrelevant. Rainer Werner Fassbinder, the only cinematic heir Godard ever had, was never succeeded. If Fassbinder was the heart of postwar European cinema, his films “photographed and acted with such intense self-absorption that [they] the effect of transforming narcissism into a higher form of political commitment,” as Vincent Canby once wrote, then Godard was its mind.

But this is simplistic, because even if Godard’s films rarely match the personal and emotional intensity of Fassbinder’s (in the same way, at least), they’re endlessly funny, loose, and far from “difficult.” What is a “difficult” movie? All of Godard’s work invites the viewer in, as long as they’re willing to consider what it is they’re actually watching: an image, projected or generated on a screen, sometimes matched with sound, sometimes not. His life crystallized cinema as a legitimate art form, but even in his death, it’s obvious how far the medium hasn’t come since Godard started working, searching, and asking questions. Almost all movies and television shows amount to filmed theater—still! It’s a prison, which can be fine, as long as you have the keys…

It’s impossible to detail or invoice the dozens of masterpieces he made, some of which I’ve written about multiple times, others mentioned once or twice, others still never before, but I will say that I’m glad I found out via writer Craig Keller’s tweet early Tuesday morning: “JLG is dead / JLG est mort.” I didn’t get to sleep until around 5:30 a.m., and after waking up briefly a couple times, I remembered that Godard had died, and didn’t feel anything like a sharp and painful reminder. No: this was a man who, as he said at the end of his Histoire(s) du Cinéma, got to walk through his dreams and bring back with him a flower. “I was that man.” And this was 25 years ago. He ended his last film with the following: "and even if nothing would be as we had hoped/it would change nothing of our hopes/they would remain a necessary utopia.” Followed by a clip from La Plaisir, where a man in old-age makeup dances himself to death. “I was that man.”