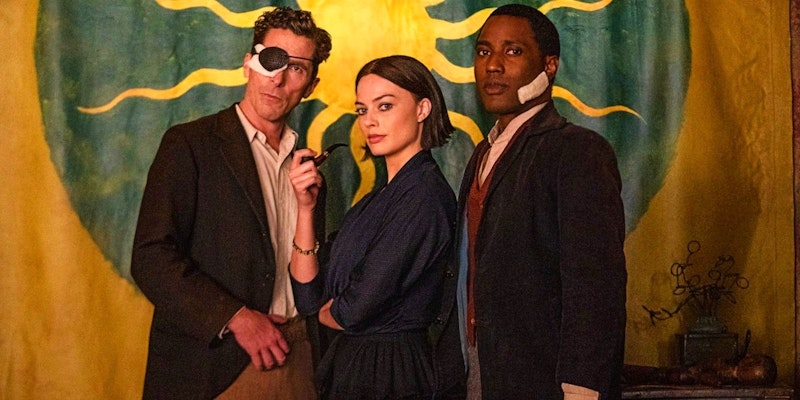 Why not stick with Canterbury Glass? It’s a better title, and certainly easier to find on the internet, where “Amsterdam” gives you exactly what you expect, and even “Amsterdam poster” gives you… well, 20th Century could’ve done a better job promoting David O. Russell’s new film. Despite some excitement when the trailer came out in July, it’s been mum since, especially after the studio moved the release date up more than a month to early-October. Russell was a reliable nominee at all of the major American awards ceremonies throughout the 2010s, but he hasn’t made a film since 2015’s Joy, which itself was tepidly received. I’ve no idea how he escaped the #MeToo wheat thresher that went through the entertainment industry in the last five years, but it can’t just be that he was laying low.

Now that his new movie is out, Russell isn’t being cancelled, he’s just ignored. Initially projected to gross $10 million in its opening weekend, Amsterdam made just under $7 million, so it’s already written off as a bomb. I’m still surprised by how bad almost all of the reviews are, from professional critics and people on Letterboxd. Some of these critiques and comments come back to Russell’s numerous and severe crimes and misdemeanors, but most of them dance around the issue by shrugging the movie itself off. To my eyes, Amsterdam was no more shaggy or “pointless” than American Hustle, I Heart Huckabees, or Three Kings. I went in without caring about the story, a mystery that, made by someone else without such a stacked cast, would probably bore me to tears.

But with so many familiar faces, along with Russell’s manic and collage-like editing style, a 1930s New York detective story isn’t an immediate runner. Christian Bale, John David Washington, and Margot Robbie lead the group, the former two veterans of World War I who were both fixed up by the latter in triage. After the war, they have a few glorious years in Amsterdam, unbothered by the machinations of evil men and nation states, before the dream must end again. The trio follow a thread of a clue to a conspiracy that leads them to the inside of an attempted corporate coup (that, as the opening title card blares, actually did happen). The revelation of American Nazis and aspiring fascists hiding in plain sight sounds au courant and cheap, but Russell’s story hews closer to the less explored influence of the Federal Reserve System that Stanley Kubrick incorporated into The Shining.

Along the way, we meet characters played by Anya Taylor-Joy, Rami Malek, Taylor Swift, Robert De Niro, Michael Shannon, Mike Myers, Andrea Riseborough, Chris Rock, Zoe Saldana, Colleen Camp, and many others whose fictional names really aren’t important or the point of this or any of Russell’s films. His cinema bridges the gap between Paul Mazursky and Terrence Malick, a filmmaker with a conventional and chauvinistic outlook who still manages to make his stories uniquely his merely through montage. I couldn’t count how many lines were played against actors’ backs in Amsterdam, or how many scenes (maybe all of them?) were culled from mountains of footage. Apparently Russell hates to call “cut” on set, something I would’ve mocked him for seven years ago but now find refreshing if only for its absurdity and commitment to the form, however wrong-headed and wasteful.

He clearly isn’t interested in creating a comfortable or safe working environment for his actors, so any “freedom” he gives them is necessarily qualified, and on screen you can feel the tension wrought entirely by the man himself, just waiting for someone or something to give him an excuse to explode. The Sony emails leak in 2014 revealed that Russell made Amy Adams’ life “a living hell” during the making of American Hustle, and while there are few reports from the set of Amsterdam, you think this guy “evolved” or simply behaved himself in a post-Weinstein world?

Since 1996’s Flirting with Disaster, Russell has made movies about half a dozen people in a room arguing and talking over each other, confused and unable to communicate. At his best, his filmmaking not only mimics but takes the form of this confusion, closer to a glorious aesthetic delirium. When great actors are let free, amazing things can happen in front of a camera. When left unmoored, and perhaps goaded, taunted, or threatened, they go cold. Neither happens in Amsterdam, a thoroughly enjoyable and consistent mystery movie that I liked more than anything else by David O. Russell, a director so many people love and I never understood.