The Bleak Life in Hollywood

Maps to the Stars is too broad for critics and too dark for everyone else. 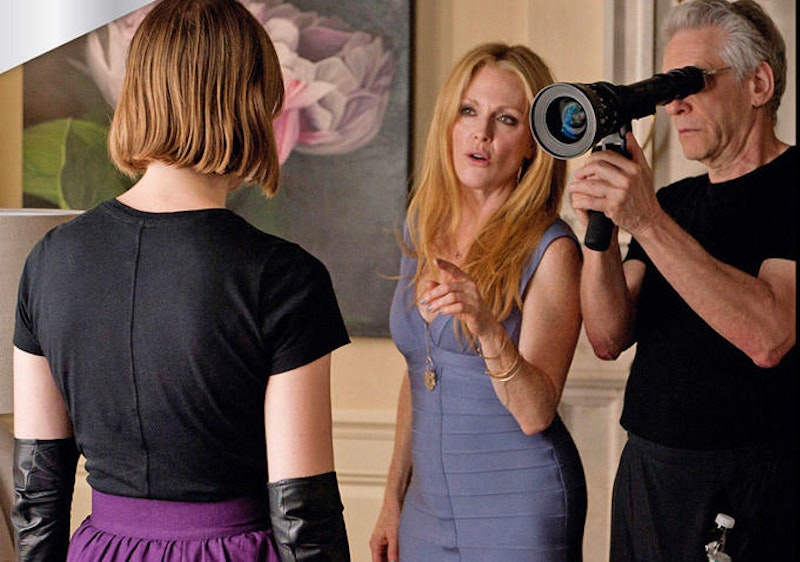 "Maps to the Stars is very extreme. It's not obviously a very big commercial movie, and even as an independent film it's difficult… it's very acerbic and satirical, it's a hard sell.” Three years ago David Cronenberg seemed doubtful his latest film would ever be made, but the hard sell sold and split the middle, found no audience between gnashing critics soured on movies about how soulless and gross Hollywood is, and most everyone else who’d rather not spend two hours with an ensemble cast of mean-spirited drug addicts, bratty tweens, pervy kooks, and nagging ghosts on a guilt trip instead of some boogeyman brains quest. Kurt Loder trashed the movie, saying, “It’s impossible to care about any of these overdrawn characters. And the story is so contrived, so glibly lurid, that you’re left wondering why anyone would want to make it into a movie. And why anyone would want to see it.”

Why is likability necessary for a black comedy? Caring about cartoon characters? Cronenberg’s film (based on a script by Bruce Wagner that was stuck in development for 20 years) is highly entertaining, and laudable for its cookie-cutter misanthropy. These are the kinds of movies that balance out the sequels and prequels, Judd Apatow-associated comedies and USA military propaganda. A common criticism is that it’s outdated—Anthony Lane points to a “nice line” about Scientology that he sees as an unoriginal riff on a line about AA from The Player. Well… so what? It’s an obscure criticism of an unabashedly broad movie, a pulpy toilet read for the screen. I couldn’t care less whether Cronenberg and Wagner see it that way. They’ve created a B-level black comedy, and B-level horror movies are a staple for bored people and teenagers looking for a place to make out. As I was leaving the theater, someone groaned that they’d have to undergo a “mental cleanse with a Sex and the City marathon” after watching Maps to the Stars, which means misanthropy doesn’t play as well as I thought.

No doubt this would’ve been a waste of time if not for the excellent casting and acting: John Cusack is the pervy New Age infomercial guru; Evan Bird the spoiled Bieber stand-in Benjie; Julianne Moore the washed-up bitchy actress zonked out on half a dozen prescription pill addictions; and Mia Wasikowska as the single innocent in a film full of leeches looking for young blood. Going in blind was the best thing I could’ve done, because reading what Cronenberg has said, and the nitpicking critics have done, gives the impression they think this film is above its station, which it might be, I just don’t want to know. There’s immense pleasure in watching sides of the world we live in play out on screen in an indulgently bleak way, as fun as Adam Sandler or Ben Stiller movies. A lot more fun, but this movie is stuck in the cracks for being too broad for critics, and too unrelentingly dark for people that just go to the movies. Sadomasochism is underrated.