On Land Ho!, from co-directors/co-writers Martha Stephens and Aaron Katz (2014). 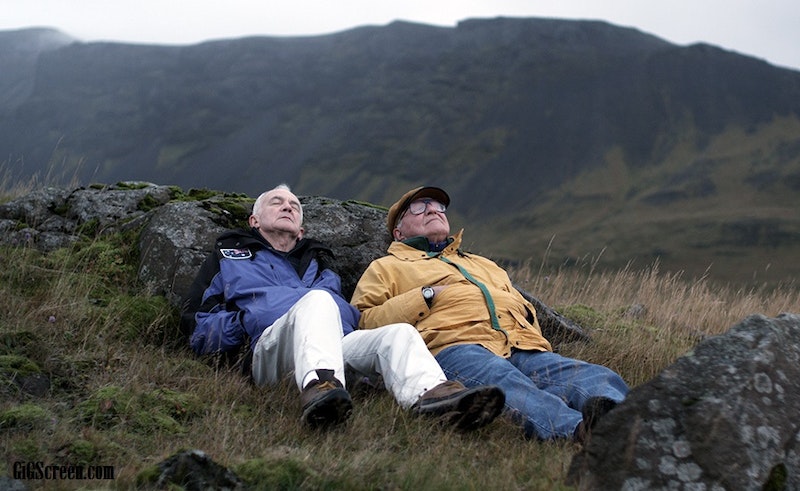 The number of new films starring senior citizens is so tiny and the audience for such films is (seemingly) so small that there’s an instinctual tendency, among some of us, to pounce upon them when they surface. Case in point: Land Ho!, produced for less than $500,000, put into “wide release” back in July, and—if Wikipedia is to be trusted—on track to double its budget sometime this year, perhaps. In the modern era, this counts as a commercial triumph.

When two former brothers-in-law reconnect after a long estrangement, cantankerous Kentuckian Mitch (Earl Lynn Nelson) presents the mild-mannered Aussie Colin (Paul Eenhoorn) with a vacation to Iceland. Almost inevitably, there’s a classic Odd Couple dynamic at play here—ex-doctor Mitch profane and needling, ex-banker Colin deferential and polite. When the pair encounters the former’s niece and her friend, Mitch introduces a wince-inducing inappropriateness that Colin, aware that one of Mitch’s songs has converted to Judaism, undercuts by encouraging a discussion of Jewish mysticism.

Gauging the tone at work here is complicated going. Hand-held camerawork suggests a documentary; pass-the-mic riffing and ribbing put me in mind of The Trip to Italy. Lame pop songs spice the action, and the co-directors lean on slow motion for “life affirming” scenes where the protagonists bear witness to geysers or dance together on a beach. Yes, this is undeniably a comedy, but hints of pathos abound that the script sidesteps in ways that cheat the audience—unless, of course, the point is “never mind the past, live in the now,” or something like that. The filmmakers also don’t quite know what to do with the tension between Mitch and Colin, building it up to a boil, abandoning it, culling it back, separating the pair for a long enough stretch at one juncture that I expected this to become a very different movie towards the end.

These varying tracks of unevenness keep the audience on its toes, at least, and when we’re weary of it, there’s always the natural beauty of Iceland to savor: the steaming natural springs, the sprawls of black ash, the mini-glaciers not long for this world. While I appreciated Eenhoorn’s gentle reserve, Nelson’s ugly American dickishness begs for its own prequel—if to explore the neediness beneath his unending, oppressive garrulousness and get to the root of why he really was forced to retire.

—Raymond Cummings is the author of Vigilante Fluxus, Crucial Sprawl, and Assembling the Lord. He infrequently blogs at Voguing to Danzig.