The Aliens Are Coming 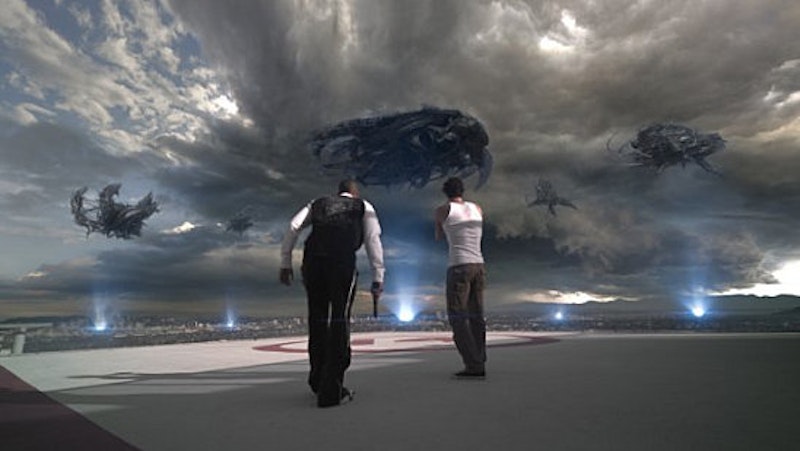 Every year a movie comes out in which the human race is attacked by aliens. From science fiction to the Rapture, the sky is a worthy host to the unseen and obsessed over. Skyline (2010) is the most recent of these; its promotion still shows two men with firearms, perched on a platform, overlooking earth's demise. Needless to say, they're ready to shoot. The foreshortened, ominous clouds form a V-shape, directing the eye towards an illuminated horizon of alien ships landing. These aliens, no matter how grotesque and foreign they're designed to be, are always anthropomorphized—two glistening eyes and a creepy smile.

German romantic landscape painter Caspar David Friedrich (d. 1840) was primarily interested in contemplative figures silhouetted against expansive landscapes (before the "male gaze," there was simply a gaze). In Wanderer Above the Sea of Fog, a man brandishing a cane, gazes at the dreamy known world. The horizon recedes in the same V-shape manner; the craziness below abbreviated as wisps of fog.

Skyline's critic rating at Rotten Tomatoes is 13%, in notable contrast to the audience's 75% rating. Film snobs will predictably say that's because most people are stupid, a sentiment I too shared when I was more full of shit. Now— mid-thirties, chronically depressed, divorced, failed career as a painter, barely a writer—sometimes I just want to see things blow up, which may point to a kind of human tragedy: that art slowly dies as the spirit dies too.

In my early-to-mid 20s, you'd find me hunched in a squeaky chair in a small independent theater, watching some slow French film, the easy phoniness of seeing anything with "Cannes" on the poster. I would think how deep it all was. I'd leave the theater, smacked by the ongoing sunlight which I'd briefly forgotten about, and imagine myself continuing the film. The world looked more beautiful as Paris, I guess, until I noticed some American cheese in my soggy sandwich.

Caspar David Friedrich must have hiked a lot to get to those perches; or maybe he just imagined them. In painting lingo it's called "working from memory," though memory is rarely that lovely. It's funny how Romanticism is considered a unique period in art history, as if all the subsequent genres can be grouped into Cynicism, a movement still going strong as we enter post-post-post-I have no fucking clue.

I know people who vote with their dollars and refuse to see dumb Hollywood movies; and if free-market economics is Democracy, then maybe we should be scared of aliens. As for me, I'll probably Netflix that dumb movie and have it live in my queue, where I'll forget about it, until that red envelope magically appears in my mailbox. Then you'll find me on my couch that evening, on my fourth glass of wine, hopefully with a girl in my arms. I'll stick my alien tongue in her mouth. Talk about romantic.