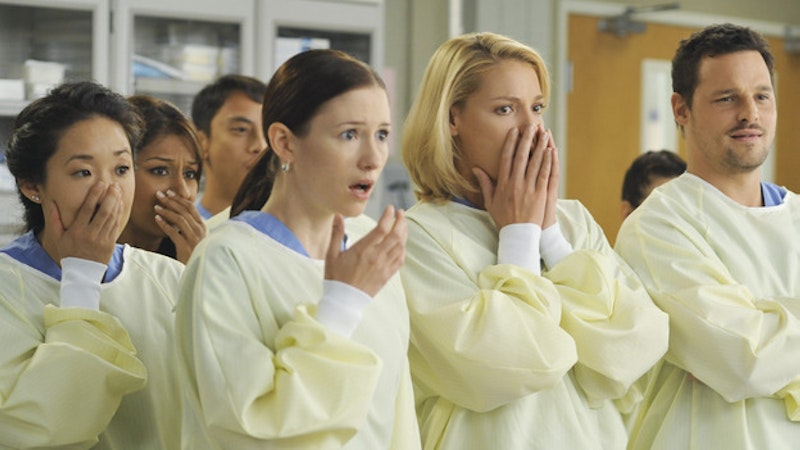 If you’re like me and gave up on Grey’s Anatomy a long time ago, the time has come to reconsider.

When the show premiered in 2005, I tuned in because I enjoy medical dramas and wanted to bury my face in Patrick Dempsey’s hair. I found it a bit melodramatic and still haven’t come to terms with the audacity of using “dark and twisty” to describe a character as vanilla as Meredith Grey, but it was a fun show that successfully blended comedy and sexual tension with the kind of over-the-top hospital drama that defines this genre. But as the show grew more popular and creator Shonda Rhimes tried to appeal to a wider audience with one love triangle after another, the quality of the writing diminished and my interest in the characters began to wane. The romantic storylines in Season 2—Izzie falling in love with a patient, Meredith getting it on with George and then crying about it, George hooking up with Callie even though nothing about that attraction made any sense, Meredith getting all googly-eyed for her vet while she’s still pining for Derek, everything involving Addison Montgomery-Shepherd—dominated each episode and the will-they-won’t-they tension of the Meredith-Derek relationship grew tiresome. After a completely lackluster Season 3 premiere I stopped watching entirely.

Meanwhile, four seasons have passed and here’s what happened while I was gone: Izzie operated on a deer, Meredith died but then somehow came back to life again, George wanted to join the army, but instead he got hit by a bus and died, Alex fell in love with a woman who didn’t have a face, the guy who played Burke ended up being a total homophobe so they got rid of him somehow, Callie became a lesbian, Izzie got cancer, something about Meredith, Derek and a Post-it Note wedding proposal, which sounds like it might the dumbest thing to ever happen on television, and a bunch of new people started working at the hospital. I can’t say I’ve missed out on much, but when everyone got excited for the Season 6 finale where a shooter would be loose in the hospital and nobody knew who would live and who would die, I was pretty intrigued.

I wasn’t as impressed by the finale as the rest of the Internet seemed to be—apart from killing two doctors I’d never heard of because they weren’t in either of the first two seasons and featuring a horrifically inept SWAT team, it was mostly just a lot of crying from characters you knew they wouldn’t kill off—but it did set the stage for what has so far been an absolutely fantastic seventh season. It is not uncommon for medical dramas to feature traumatic events that turn the entire hospital on its head, only to never mention them ever again. Grey’s Anatomy did this in Season 2 with a post-Super Bowl episode that had Meredith holding a live bomb lodged in a patient’s abdominal cavity, followed by an episode where all the drama comes from the arrival of Mark Sloan, the ridiculously hot plastic surgeon who slept with Derek’s wife. To the best of my recollection, no one even talked about how the bomb squad guys had just a few days ago been blown to bits.

But that’s not the case this season. In a rare, wonderful move, the Grey’s Anatomy writers have touched on the post-traumatic effects of the shooting in every episode. From Derek’s reckless, adrenaline-charged driving, to Alex Karev’s inability to ride an elevator after lying alone in one for hours, bleeding from a gun shot wound, as well as his refusal to have the bullet removed from his chest. The first few episodes of the season featured a trauma counselor, hired to assess each doctor’s recovery and ability to return to work. The season’s sixth episode “These Arms of Mine” was shot from the perspective of a documentary crew exploring the doctors’ experiences six months after the attack on the hospital.

Best of all is the portrayal of post-traumatic stress disorder in Cristina Yang. Depicted as the smartest, most determined, gifted and emotionally distant of the show’s original crop of young doctors, Yang has so far this season suffered from a breakdown during an operation, panicked when put in charge of a patient’s care and quit her job as a doctor. While I’ve read that many fans of the show have grown tired of this confused and listless version of Cristina, I admire the Grey’s writers for following through on this storyline and for once addressing, as realistically as fictionalized television will allow, that traumatic events have far-reaching and long-lasting effects. Traumatic, life-altering moments are so often depicted on television, the drama played up to its fullest to grab attention and boost ratings. It’s nice to finally see the other, less flashy side: that trauma recovery can be a long and difficult process and that frequently witnessing death doesn’t necessarily make it easier when confronted with one’s own mortality.

Tonight’s episode will feature a mass shooting at a college campus near the hospital. I’m excited to see how the characters will react to such a familiar situation and happy that a show I once thoroughly enjoyed is finally watchable again.