It's Good For What Ails You

Michael Cera finally does something right with Scott Pilgrim vs. The World. 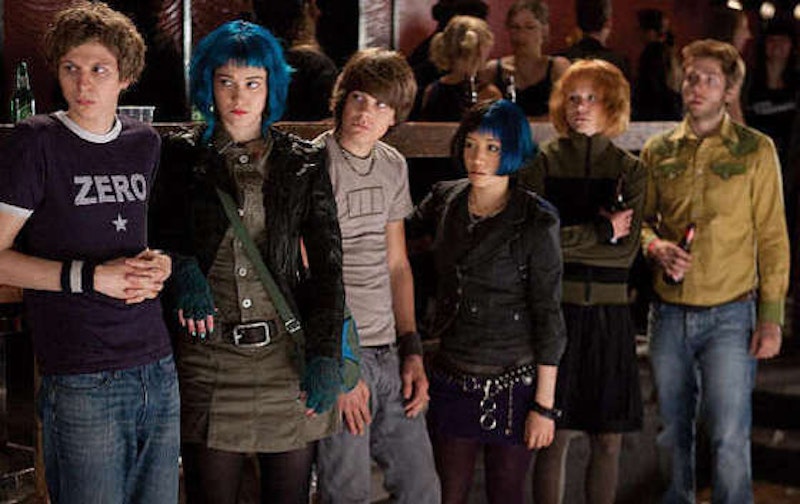 After a day of barfing and sad-sacking it in bed, Scott Pilgrim vs. the World felt like an appropriate tonic, and my perpetual stomach pain vanished as soon as the first comic book onomatopoeia, "DING DONG!", flashed on the screen. No one seems to be psyched about this movie, though. Everyone I've talked to dismissed it, and it tanked when it was released last summer. I almost saw it in August, but my girlfriend and I bailed after making it to the theater 20 minutes late. No matter: she feels, as many do, that Michael Cera has been playing the same awkward, well intentioned, "quirky" (ugh) dude for years, and he seriously bugs her. Youth in Revolt, Paper Heart, Superbad, Nick & Norah's Infinite Playlist, Juno, Year One...it's the same dude. And yeah, he's sort of the same guy in Scott Pilgrim, but this is a much better film than any of those listed.

Scott Pilgrim is ostensibly about the title character's courtship with the spunky Ramona Flowers, and how he must defeat her six evil ex-boyfriends (and one ex-girlfriend) to officially date her. All seven are disposed of in gloriously over the top fight sequences constructed by CGI and informed by stuff like Tekken, Street Fighter and Soul Caliber. But it's just as much a film about video games as it is about being in a struggling band, dealing with girls, Lying in bed, I found myself finding little things to get excited about: the ubiquitous Zelda references ("Great Fairy's Fountain" from Ocarina of Time is included early on), Scott's Smashing Pumpkins heart and ZERO t-shirts (one of the film's sections is even called "The Infinite Sadness"), Alison Pill doing her best Moe Tucker as the icily sarcastic and red-headed drummer Kim (she's the prettiest one in the movie), and the unofficial mantra of Scott's band, Sex Bob-Omb: "We are Sex Bob-Omb and we are here to make you think about death and get sad and stuff."

This movie admittedly has a limited demographic, so it sort of makes sense it bombed, but as always with movies like this, it's killing it on DVD. But even disregarding the fanboy minutiae that made me squirm, this is just a gloriously joyful movie. Too many films released today are self-serious, boring, and restrained. Scott Pilgrim is none of these, and it shoots for the moon without ever feeling forced or inauthentic. This is an explosive movie filled with CGI, but above all it's a sincere piece of work. It comes from a place of love for the culture it depicts, and it just feels honest. Certain long-in-the-tooth critics may have found it incomprehensible or nonsensical, but it's not for them. Ain't It Cool's Harry Knowles got it right when he named Scott Pilgrim the best film of 2010.

This is a movie for those who grew up in arcades and record stores, for those who always wanted to start a band, and for all those guys perpetually chasing the one and only unattainable Girl. Scott Pilgrim made me feel physically uplifted, rejuvenated, and refreshed, and as I write this I feel like a million bucks.