As a three-toned biography, It Might Get Loud is fun enough, but as a look at the most popular instrument of the 20th century, it's totally unsatisfying. (Grade: C+) 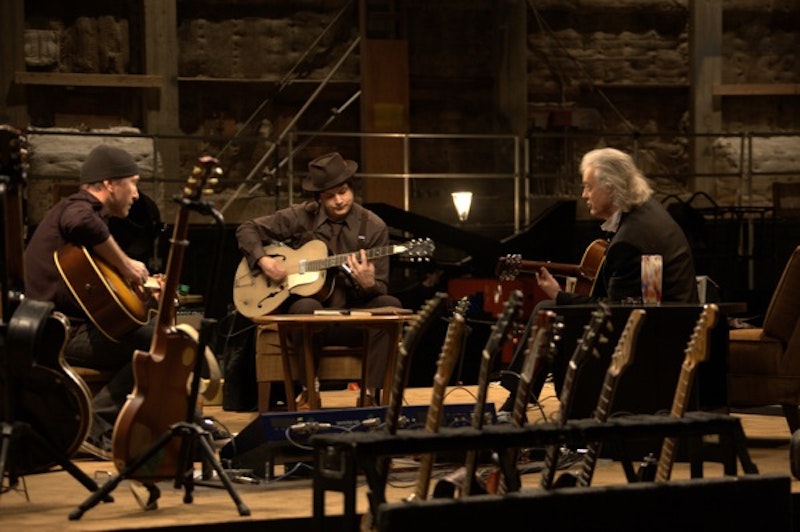 The opening credits of It Might Get Loud are digitally wrapped around bodies of gleaming electric guitars, photographed up close and in gorgeous high contrast. An opening bit with Jack White building a makeshift instrument out of a tin can and some wire plants the notion that all our modern electronics and gear are superfluous, but this credit sequences argues otherwise. It's a feast of steelwound strings, humbuckers, shining lacquer finishes, and pearl inlays. It also promises that we're going to dig deep into the history and mechanics of this instrument, to understand how it works and how it's changed over time. And while some, myself included, might quibble with our guides—Jack White, The Edge of U2, and Jimmy Page—they're all perfectly qualified to explain the particulars of their job. But It Might Get Loud, the first documentary from television director Davis Guggenheim since An Inconvenient Truth, barely gets beyond this opening bit of gear porn. It's really just a biography of its three stars, with a few dramatically staged moments of musical interaction in between standard-issue Behind the Music back stories.

White, Page, and The Edge wouldn't be my first choice for this kind of thing, though their diversity in backgrounds, age, and style do make for a suitably wide-ranging trio. (Let's have fun, though: why not Neil Young, Johnny Marr, and Dean Ween? Or Keith Richards, Thurston Moore, and Marc Ribot? We could go all day.) Their actual insights about the instrument are few, mostly limited to their songwriting and recording processes or reminiscences about their band's origins.

The Edge comes off quite agreeably, even if his impeccably trimmed goatee, ever-present skullcap, and leather wardrobe seem a little juvenile. His new-agey approach to music—he likens playing with his many effects pedals to "jumping off into the unknown"—likely won't attract any lapsed U2 fans back into the fold, but he seems genuine. Hearing of the band's origins amid IRA-infested Dublin is also a welcome reminder that, whatever Apple-sponsored world-saving jibber-jabber the group currently indulges, they've certainly earned the right to a little late-career sloganeering.

Page, now decades removed from the literally industry-changing blowout success of Led Zeppelin, reveals himself as more or less what I've always suspected him to be: a charming, quiet, and vaguely fey Englishman with excellent musical taste, and a consummate guitar nerd. It's always surprised me how Zeppelin's badass reputation, still unflagging, hasn't suffered at all from the fact that these guys regularly wrote songs about The Hobbit. Looking at Page now, particularly as he tours Headley Grange and recounts stories about recording Led Zeppelin IV with a boyish smile, it's almost impossible to imagine that he once toured the world in a private jet and indulged unknown decadences with probably thousands of groupies. Now white-haired and mild-mannered, Page's stories of his skiffle days and his later introduction to blues music are touching, if not particularly illuminating.

Then there's Jack White, whose music, to put all cards on the table, has affected me the least of the film's three participants. The White Stripes and Raconteurs frontman now lives in a farm in rural Tennessee and dresses in obnoxiously anachronistic clothes. He spends the greater part of his scenes decrying the impersonality of modern recording and espousing the authenticity of Son House. He likes instruments that are banged up and imperfect, like the janky, out-of-tune upright piano that he performs on in his living room or the thrift store guitar that he strangles with a slide and Bullet microphone. And while the live footage of White gave me new respect for his talents and onstage presence, this disingenuous Luddite routine seems forced and unconvincing, particularly in light of Page and The Edge's relatively unpretentious storytelling. And as White tells the story of his growing up in urban Detroit, including his artistic awakening upon hearing garage- and art-rock in his teens, his newfound pseudo-steampunk routine seems more and more like posturing. It's clear from the White Stripes' stylized aesthetics, art-history-aware gestures, and their stunning conceptual videos that White's tastes expand beyond dead bluesmen. For all his tight-lipped, defensive evocations of Southern ghosts and raw energy, White seems most at ease during a moment on the soundstage, watching Page play the main "Whole Lotta Love" riff on his Les Paul. His guard comes down, however momentarily, and White finally has an honest look on his face, like he's remembered that empowered, astounded feeling that all teenage boys have when they first hear Zeppelin.

These sequences, with all three men sharing riffs and remembrances around an obviously fake living room setup, are never quite as fun as you want them to be. Everything sounds and looks great—the entire movie looks very handsome in a disinfected kind of way—but there's a limit to how much three-distorted-guitar jamming one can endure. The Zeppelin songs unsurprisingly fare best, particularly a climactic version of "In My Time of Dying," but there's no real point or drama to this star summit, just three guys gamely nodding their heads as one of them recounts a tour story or talks about a favorite piece of equipment. And then, apropos of nothing, the movie ends with an acoustic cover of "The Weight," which they all have a little trouble remembering the chords to. What business do these guys have playing The Band's iconic anthem as the finale of a documentary about guitar playing, particularly since none of them even so much as mention The Band during their biographical sections? It's a completely tone-deaf moment, matched only by a late scene where each player is identified with his signature guitar—The Edge's Gibson Explorer, White's red Montgomery Ward Airline, and Page's...Telecaster? Granted, that's the one he first played with a bow while in the Yardbirds, but it seems insane to claim Page's most-used guitar was anything but the Les Paul. (I'll conjecture that it has something to do with affording the Fender Company a duly reverent place in the proceedings.)

Above all, it's the self-importance of It Might Get Loud that makes its shortcomings more glaring. The build-up to the meeting of these three musicians is so epic and star-struck that their ho-hum run-throughs of classic songs can't help but seem perfunctory. And the biographical details, while intimately portrayed, aren't going to be of much use to any of the bands' fans. More to the point, however, there's a disappointing lack of actual guitar wisdom on display; we learn nothing about the instrument that doesn't directly pertain to the stars' stories. It's a good-looking hagiographic triptych that barely touches on the instrument that makes its subjects interesting in the first place.