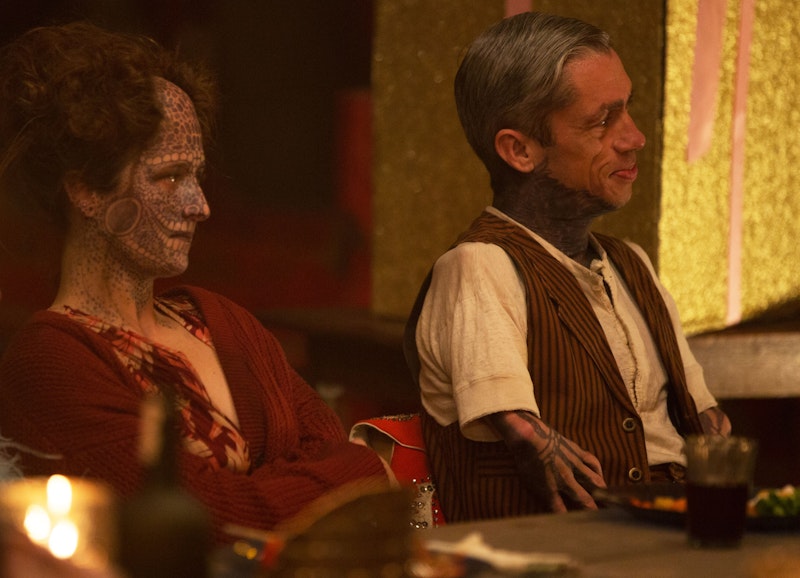 • The opening scene of this episode was incredibly well-crafted and is probably one of the best in the series history. Everyone is gathered around a table to celebrate Elsa’s move to LA and Chester taking over the freak show. Elsa toasts Denis O’Hare’s character, Stanley, and makes an overt allusion to Tom Browning’s 1932 film Freaks. Her soliloquy ends with the reveal that all the freaks know that Stanley is responsible for the mounting body count. They all go on a bloody rampage and follow him through the camp with knives and meat cleavers. It's a scene that will haunt me for weeks.

• All the father/son scenes this season seem to have been a total waste, since Dell is dead and Jimmy is handless and despondent about it. Elsa tells him that her lover, Massimo (Danny Huston) is coming to town in order to build Jimmy new hands, which involves her revealing her secret leg to Jimmy for the first time. She also tells Jimmy that Maggie should be forgiven for basically helping slaughter their near and dear friends. As Maggie changes Jimmy’s bandages, she cries a lot and swears to make things right with him and everyone else. Lol, okay, girl.

• Massimo arrives and gives his backstory, how he attempted to track down the torturers who cut off Elsa’s legs. As he was about to kill the man who orchestrated the attack, he was captured himself and tortured for years. He claims he never sought out Elsa because although his body healed, his mind did not. Maybe the overarching theme of this season is that everyone is damaged in both body and mind.

• Ryan Murphy furthers the connection between this season and season two by revealing the men who tortured Elsa were Nazis, and not just any Nazis, but ones who were under the control of Dr. Hans Gruper (Dr. Arden from season two). This isn’t explained further because its AHS and why bother explaining to the audience what the hell is going on?

• The twins are still having sex with Chester and Marjorie (his doll/Jamie Brewer) is getting pissed that she isn’t allowed to watch anymore. Marjorie guilts Chester into thinking that the twins should be sawed in half, and reminds him that she is “just a doll,” with a smirking grin. We’re treated to a flashback of Chester bludgeoning his wife and her lover with a hammer with a manic look in his eyes. I want Marjorie to be real so badly.

• Dandy reappears and attempts to tell the twins that the man they’ve been sleeping with is a deranged sicko. The twins are skeptical and ask him to leave, but later go through the file which reveals Chester to be a murderer. Why isn’t Dandy killing people anymore? Is he and we’re just not treated to that information? What happened to his huge storyline earlier this season? So many questions, so few answers.

• Chester wants the twins to be his assistant for his sawing a woman in half magic trick, but they’re not into it. They storm off and he has a mental snap. Maggie shows up and is like "I’ll do it!" and climbs into the box. Chester handcuffs her legs and begins to see his wife in the box instead of my sweet Emma Roberts. He saws her in half while everyone looks on and pulls the box apart thinking its still a trick. Because American Horror Story has to remind it’s audience its still edgy, viewers are treated to a ton of Maggie’s guts spilling onto the floor. No one from the freak show cares though, with Desiree saying bluntly, “we steal her jewlery and bury the bitch.”

• Was that really the end of Maggie? Was that really the redemption she gets for ratting on Stanley with the help of Desiree no less? I think the point was that, no, Maggie could not be redeemed for what she did, but they always do Emma Roberts wrong on this show. Also, Maggie’s storyline was overshadowed by her relationship with Jimmy, who called her a “deceitful little slut,” right before she died. Harsh! They never make up and Jimmy doesn’t seem too upset either when he’s told that Maggie is dead.

• The freaks all have a meeting that goes 0-100 real quick. In the course of two minutes they decide that Elsa is the worst for killing Ethel and that she needs to die. This season has gone so downhill. What started as a meditation on how society views people who are different has devolved into the freaks murdering each other in cold blood.

• The only people who seem to still have a heart are the twins, who arrive at Elsa’s tent to warn her that the freaks are plotting to kill her. When Elsa asks the twins why they’ve saved her they claim, “now we’re even.” Elsa runs away just in time for the freaks to rush into her tent with meat cleavers attempting to kill the one person who has given them a home.

• Chester and Marjorie have an intense falling out about whether they should leave after the murder of Maggie. I kept hoping that Marjorie would turn out to be a possessed doll who was manipulating Chester all along, but nope. He stabs his puppet repeatedly and turns himself into the police for the murder of, “a young woman.” Bye, Chester. Your storyline turned out to be a throwaway too.

• How Elsa escaped successfully is revealed in the last minutes of the episode. She calls up Dandy and asks him to buy the freak show from her for $10,000 dollars. She takes his car and high-tails it to LA as he arrives to survey his new property. I’m interested to see how the final episode is able to tie up all these loose ends while still trying to make new conflicts and sub-plots happen.

• Jimmy is finally given his new hands by Massimo, only they’re wooden lobster hands. He doesn’t seem to mind though, saying "thank you" before the screen goes blank. Wooden lobster hands is probably the best metaphor for this season: useless and redundant.